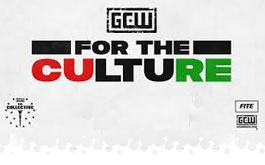 From the Cuban Club in Ybor City, Florida, as part of The Collective held on Wrestlemania weekend. This is an outdoors venue with a midnight bell time. Our host is Big Perc and a variety of guests.

The show opens with all the entrants in the ring, and AC Mack grabs a mic to complain that his entrance wasn't televised and then does his own ring introduction. This earns him a five on one beatdown at the opening bell. The match quickly settles in the format of everyone selling at ringside while 2 guys take turns hitting spots in the ring. I'm not saying it isn't entertaining, but it is what it is. Zo is the first to hit a running somersault dive onto the competition. Martyr is a scrappy, undersized rookie and does well establishing himself as the underdog throughout the mayhem. Mysterious Q springboards to DDT Martyr off Rogue's shoulders. Hollywood builds some steam and nearly flings himself off the apron while hitting a penalty kick. It happens again, so this apparent near slip might be shtick. Hollywood emerges from a breakdown with a gutbuster on Q for the win at 8:10. Fine dark match level sprint, *½.
Winner: Troy Hollywood

The champions spontaneously agree to defend the titles and then jump the challengers from behind. Thick N Juicy recover with stereo scoop slams. Nightingale hits rolling vertical suplexes for 2 on Steelz. Nightingale takes some chops but cartwheels into a pump kick. Valentine helps with a cartwheel shoulder smash. Steelz gets sandwiched in the buckles and rolls into a tag to Hogan, who charges into Valentine's scoop slam. Hogan rakes the eyes to isolate Valentine. They screw up the timing of Valentine suplexing Hogan onto Steelz, as everyone has to just kind of wait until Valentine is ready. Valentine recovers with an electric chair slam on Steelz. Nightingale gets a hot tag and runs wild, hitting Hogan with a spinebuster and pouncing Steelz out. Spear on Steelz, but she recovers with a sudden cutter on Nightingale for 2. Steelz misses a frog splash, but Hogan tagged herself in and superkicks Nightingale. Crucifix driver by Steelz and fisherman neckbreaker by Hogan finishes Nightingale at 10:13. This was botchy but I liked it, **¼.
Winners and still Impact Knockouts Tag Team Champions: Fire N Flava

Davis has settled into the role of grizzled veteran and trades holds with Smooth. Smooth has size and punches Davis in the face, prompting a series of body shots and chops. Davis' scoop slams have Smooth reeling. Smooth surprises with snake eyes and a big boot. Standing leg drop by Smooth gets 2. They slug it out and Davis builds some momentum with a shoulder block. Smooth answers with a slick STO for 2. Sitout powerbomb by Smooth also gets 2. Davis retaliates with an awkward stomp to the back and hits a piledriver to win at 8:11. Not bad, just a bit clunky and slight, **.
Winner: Jon Davis

Calvin Tankman vs. Andy Brown vs. Jah-C vs. Myron Reed

I must say, I'm digging the purple mood lighting for entrances. Such a cool atmosphere. Tankman goes right after Brown, knocks Reed down, and gets flustered by Jah-C. Tankman unfortunately sells a phantom neckbreaker, and Jah-C saves face with a stomp to the head. Reed clears the ring, but Brown face plants him for a boot and running uppercut. Jah-C lariats Brown and hits a glancing dropkick. Reed misses a springboard double stomp but hits a beautiful axe kick on the apron. Reed hangs Jah-C and hits a neckbreaker for 2. Tankman pounces Jah-C and Reed, and hits Brown with a spinebuster. Reed superkicks Tankman, but he answers with a lariat for 2. Jah-C removes Tankman, but Brown ambushes with a Superman punch. Reed wipes Brown out with a tope suicida. Reed kills Jah-C with a spike DDT for only 2. Brown interrupts Reed with a snap German and backbreaker for 2. Jah-C flies into Brown's forearm smash and then eats a piledriver onto the apron. Reed sprints in for a flying cutter over the ropes to the floor! Reed misses a 450 splash, and Tankman takes advantage with a popup elbow. Tankman spineubsters Brown into a back elbow and Tankman Driver to win at 8:38. Highly entertaining spotfest outside of Tankman's early embarrassing botch, **½. Winner: Calvin Tankman

Keith rejects a fist bump and they aggressively lock up. Keith smashes the face, but Lockhart locks the arm. Lockhart knee drops the small of the back and slides into a nifty takedown to cradle the arm and leg. Keith reverses into a heel hook. Keith follows with stiff chest kicks. Uranage by Keith gets 2. They transition into a slugfest and Lockhart hits a desperation lariat. Lockhart finds his second wind and hits a running crossbody. Lockhart hits a pair of T-bone suplexes and a flying crossbody. Keith comes back with a DDT out of the buckles for only 2. Both guys frantically look for a KO blow, and Lockhart hits a Masada Driver to win at 11:42. Solid match, though I found the mat wrestling portion to be far superior to the brawling portion, **¾.
Winner: Darius Lockhart

Keith teases a post match attack, but instead raises a fist out of respect.

Knight goes for a wristlock but Lamar cartwheels out. They trade headlocks and head scissors, and Knight hesitates on a superkick. They run the ropes, trade leap frogs, and seem to have each other's tricks well scouted. Lamar rolls across the ring for a cute frog splash. Lamar wrenches in an abdominal hold and wipes his elbow across Knight's face. Snap supex by Lamar gets 2. Knight counters a high crossbody with a dropkick to the gut in mid-air. Suplex by Knight and a glancing missile dropkick. Knight hits springboard moonsault and is wincing in pain, so Lamar scores a sweet tope suicida. Knight recovers with a proper springboard dropkick and running plancha to ringside. Knight misses a moonsault but manages to backflip into a knee strike. They trade KO blows for a breather. Lemar hits a super backdrop but Knight sprints up for an enziguri. Knight goes for a super poison rana, but Lamar lands on his feet and hits a quick Mushroom Stomp and Brainbuster, but Knight kicks out! Torture Rack Backbreaker by Lamar and a Liontamer gets the submission at 11:54. They overcame a few slips to pull of an exciting flying contest, ***¼.
Winner: Tre Lamar

They lock up and JTG aggressively shoves a stunned Gray to the mat. Gray answers with a decapitation lariat for a close nearfall. JTG takes a retreat while Gray draws a metaphorical line in the sand. JTG takes control with a spinning back elbow and hits a sick dragon spinebuster. This ruthless version of JTG bears no resemblance to the guy we saw in Cryme Tyme. JTG completely dominates unti Gray counters a choke with a chinbreaker. Gray rallies with quick back elbow shots and a jackhammer. Moonsault by Gray gets 2. JTG comes back with some swinging power moves, but can't put Gray away. Gray avoids the Brooklyn Edge and hits some leg lariats. Superplex by Gray gets 2. Gray uses his weight to avoid a powerbomb and lands a decapitation lariat for 1! Gray hits another lariat and holds on for an Emerald Fusion to win at 14:01! Good match, carried by Gray's come from behind performance. JTG deserves another look by a major company, ***.
Winner: AJ Gray

Billy Dixon leaves commentary to take Gray down with a chair shot. Some smart-ass from the crowd yells “That's not for the culture!” Dixon cuts a fiery promo to express that he's sick of Gray and wants him in a dog collar match.

They cautiously feel each other out, and then Rush puts his arms behind his back to send a message. Moriarty doesn't take the bait and goes for a hammerlock. Rush doesn't like being on defense and hits a spinning crossbody off of the apron. Moriarty maneuvers into a deep arm drag and uppercuts the arm. Rush dodges a Dropdown, and Moriarty takes a bad landing on his bandaged ribs. Moriarty is wounded but manages to drive his knees into the arms and applies a deep armbar. Rush punches back, but Moriarty keeps him on defense with well targeted arm attacks. Rush hits a slick back suplex and cool scissors kick. Moriarty breaks Rush' back handspring with a kick and double stomps the chest for 2. Rush sends Moriarty to the apron with a rana and knocks him down with a back handspring heel kick. Rush sprints into a suicide dive, but Moriarty comes back with a sleeper. Rush breaks out for a roundhouse kick and low facebuster. They slug it out and Rush slams Moriarty into an armbar, but Moriarty counters with a crucifix pin that seems to get a 3 count, except the ref stopped counting for some reason. You can just feel the wind getting sucked out of the venue. Rush hits a frog splash for only 2 and argues with the referee. Moriarty rolls Rush up for the win at 16:50. This was cooking until the botched nearfall, but it was almost over anyway, ***½.
Winner: Lee Moriarty

Everyone is exhausted but gets up to dance during the entrances. They start with some chain wrestling, and Swann flips out of a cravat. They shake hands and restart by exchanging dropkicks. Scorpio sends Swann to ringside with a dropkick and fakes a dive. They run the ropes and Swann dropkicks Scorpio out and also fakes a dive. Swann builds some steam with a head scissors takedown and spinning DDT. Scorpio breaks an armbar in the ropes. Scorpio comes back with his educated feet. German suplex by Scorpio gets 2. They slug it out and Scorpio hits a spinning heel kick. Tumbleweed by Scorpio is followed by a flying tumbleweed. Scorpio ejects Swann from the ring, but Swann answers with a cool springboard Phoenix Splash. Desperation Pele kick by Scorpio and a moonsault gets only 2! Scorpio hits another top rope tumbleweed and signals a powerbomb, but Swann slips out for a series of slick kicks. 450 Splash by Swann only gets 2, so he hits a Phoenix Splash to win at 17:48. Scorpio did really well keeping up with Swann, but everyone is tired as we near 3 am, ***.
Winner: Rich Swann

Final Thoughts: Fun show, but nothing I would recommend you go out of your way to see, making for a mild disappointment considering how good the first For The Culture event was. The late night setting worked against them, even if it made for a neat viewing experience, but the lack of energy from the fans for large portions of the event was noticeable.