-From Tokyo, Japan. I will gladly admit I haven’t watched much Lucha, so this review could get hairy.

Maximo and Mascara Don vs. Taka Michinoku and Taichi

Maximo is playing a flamboyantly gay gimmick and flirts with Taichi. They exchange arm drags, with Maximo scoring a head scissors takedown. Mascara Don squares off with Michinoku in a more serious fashion. Taichi stops Mascara from a running dive and chokes him with a hammer at ringside. Taichi gets away with using his weapon in the ring, as he and Taka isolate Maximo. Taichi tries to remove Mascara’s mask and gets pretty close (to massive crowd heat). Maximo makes a comeback and lands a nice suicide dive on Taichi. Taka scores a flying cross body on Maximo, and Mascara sets up a dive onto everyone else (including his partner). Back to the ring, Taichi rips his pants off to signal the end, but gets caught in a Mascara torture rack. Mascara lands a double missile drop-kick and clotheslines Taka for a near fall. Mascara stumbles through a springboard but holds Taka still for a French kiss from Maximo. Mascara forces Michinoku to submit to his Don de Mariposa at 10:15. Energetic opener that got the crowd going, **ľ.
Winners: Mascara Don and Maximo

-Maximo is so caught up in the moment he plants a kiss on Mascara, who runs away in horror. That’s real nice, guys.

Stuka Jr. and Rey Cometa vs. OKUMURA and YOSHI-HASHI

Hot start for the luchadors, as they hit simultaneous moonsaults to ringside. Stuka Jr. shows off with somersaults and drop-kicks OKUMURA to the floor, but HASHI cuts him off with a clothesline. Rey Cometa tags and flusters HASHI with a spinning head scissors. Somersault arm drag by Cometa gets a near fall. OKUMURA stops Cometa with a spinning backbreaker. Cometa bounces back with a flying hurricanrana and another one off the apron. Cometa dishes out a backbreaker to the Japanese flag-bearer girl. Man on woman violence isn’t cool, man. Stuka Jr. rejoins the action with a flying shoulder block off the top rope to the floor, while Cometa wipes out HASHI with a running dive. The woman attacks Stuka, and gets suplexed on top of OKUMURA. Stuka nails a flying splash on both of them for the win at 4:45. The luchadors dominated this elaborate squash match, **.
Winners: Stuka Jr. and Rey Cometa

Toru Yano disrespectfully tosses his water at the luchadors during his entrance, sparking a brawl that clears the ring. Yano rips the mask off one of the commentators, which is simply SHOCKING to the fans. The match is restored, with Jado throwing chops, but quickly gets overwhelmed. The masked man I believe is Fuego flusters Gedo, but gets ambushed during his dive attempt. Yano sneaks in a spear, turning the tide in favor of his team. The good guys make quick tags, but Yano’s team steamrolls them all. Eventually the match breaks down and Yano’s entire team get whipped into each other, leading to an elaborate circle of leg submissions. BUSHIROAD and Tiger Mask nail double suicide dives, leading to the obligatory marathon of dives to the floor. Yano rebounds with a wheelbarrow suplex in the ring. Desperado catches Vangelis with a Vertebreaker for the win at 10:02. Crisp high flying outing here, though I was distracted by not being familiar with most of the participants, ***.
Winners: Titan, Fuego, El Desperado, Tiger Mask and BUSHIROAD

Rey Escorpian and Tomohiro Ishii vs. Tetsuya Naito and Rush

Rush mixes it up against Escorpian in the early going. Naito tags and goes after the arm, but Escorpian reverses with clubbing blows. The ever-intimidating Ishii tags but Naito holds his own, hitting a drop-kick to the head. Ishii absorbs multiple blows but fires back with rapid fire stiff attacks. Naito explodes from the corner with a head butt, and Ishii challenges him to hit harder. Naito gets double teamed, as Escorpian and Ishii take turns hitting chops. Naito surprises with head scissors takedowns on Escorpian and an enziguri on Ishii. Rush tags and trades chops and stiff drop-kicks with Ishii. Rush dispatches of Escorpian with a suplex over the ropes and a running dive! Naito trips Ishii into position for a slingshot drop-kick, followed by a missile drop-kick. Ishii comes back with a power slam on Naito. Delayed vertical superplex by Ishii gets a 2 count. Naito matches Ishii punch for punch until Ishii turns him inside out with a lariat. Tornado DDT by Naito, and a running forearm. Rush and Escorpian return to the ring and exchange strikes. Running drop-kick to the face by Rush gets a 2 count. Rush misses a flying senton, allowing Escorpian to nail a flying leg drop. Rush counters with a piledriver for the win at 12:36. Great hard-hitting exhibition here, satisfying as it’s own match, but left me wanting to see more, ***.
Winners: Rush and Tetsuya Naito

-Ishii and Naito continue to brawl at ringside and need to be separated. Order is restored long enough for them to stare each other down in the ring.

Ultimo Guerrero heels it up in the early going, whipping his jacket. They start off with some mat wrestling. Sombra breaks a surfboard stretch and applies one of his own. Guerrero turns it around with a scary crucifix hold, but Sombra reverses into a modified trailer hitch. They quicken the pace, with Sombra almost killing himself with a springboard somersault senton to the floor. Flying cross body gets 2 for Sombra, but Guerrero retaliates with a baseball slide drop-kick, setting up a dive over the ropes. Sombra counters with a top rope hurricanrana for only 2. Guerrero quickly rebounds with a power bomb out of the corner. Running knees to the head by Sombra also gets a near fall. Guerrero counters with a slam off the turnbuckles. Sombra dumps Guerrero for a moonsault off the top rope! Sombra barely connects with a second moonsault in the ring, only getting a 2 count. Guerrero counters a lionsault and a standing moonsault, but Sombra surprises with a dead-lift Shadow Driver for the win at 11:51. Frustrating match that was disjointed and sloppy, but had some spectacular moments, **˝.
Winner: La Sombra

Takahashi seems to be NJPW’s answer to Val Venis. Tanahashi squares off against rival, Nakamura, in the early going. They quickly get mad at each other and but wrestle to a stalemate. Takahashi and Ibushi tag in and trade hard strikes. Mephisto and Mistico have their turn to show off, with Mephisto catching Mistico in mid-air for a power bomb into the ring post. Nakamura, Mephisto, and Takahashi all linger in the ring at once, dishing out triple team attacks to their opponents one at a time. The good guys fight back until the ring is cleared. Mistico nails a flying hurricanrana to Mephisto on the floor. Nakamura misses a head of steam, allowing Ibushi to hit a springboard missile drop-kick. Roundhouse kick to the head by Ibushi, followed by a standing moonsault, gets 2 on Nakamura. Ibushi gets tripped on the turnbuckle, leading a slam by Nakamura. Ibushi leaps into hurricanrana but Takahashi knocks him off the turnbuckles. Takahashi catches Tanahashi with a power slam for 2. Tanahashi gets hanged on the ropes but hits a hangman clothesline on Takahashi. Nakamura surprises Tanahashi with a dive to the floor, but Ibushi surprises with a moonsault of his own. Mistico nearly puts Mephisto away with a flying cross body. Mistico spins Mephisto around into an armbar for the submission win at 11:49. This was a fun high-flying showcase that once again left me wanting to see more, ***Ľ.
Winners: Mistico, Kota Ibushi, and Hiroshi Tanahashi

The bell rings and they waste no time trading quick counters. They almost effortlessly sprint through a rapid-fire exchange until they come to a stalemate. Dorado scores first with a hurricanrana into a dive over the ropes. Volador recovers with a hurricanrana and dive of his own. They resume bouncing off one another at a blistering rate until Volador hits a seamless suicide dive. Volador misses a second dive but collides with Desperado. Dorada rebounds with a perfect suicide dive of his own. Volador counters a springboard move with a drop-kick to the back, but suffers a similar fate with his own springboard attempt. Dorada wows with a beautiful springboard moonsault to ringside. Volador responds with a moonsault off the top rope. Back to the ring, Volador nails a Codebreaker for 2. Dorada comes back with a hurricanrana on the floor, setting up another off of a seating area. Back to the ring, Volador counters with a power bomb and buckle bomb. Superkick and backstabber by Volador only get a 2 count. Dorado dances around the ropes to hit a drop-kick. Volador catches Dorado with a guillotine leg drop off the second rope. I’m getting numb to all these hurricanrana and moonsaults. As I type that, Dorado nails yet another dazzling dive, spring boarding off the first rope. Volador nails a top rope rana for a good near fall. Dorado somersaults into a roll-up counter. Dorado slips a bit on a Destroyer. Dorado moonsaults into a big boot counter! The crowd is getting really invested in the false finishes. Volador nails a sharp DDT for the win at 17:54. My wrestling sensibilities find a match that is 90% high spots to be a bit jarring, but these two had a spectacular outing that got over huge with the audience that was watching it. It’s not for me, so it’s hard to give it a proper rating, but I’m going to say ***ľ because almost everything they did was well executed and it tore the house down.
Winner and still NWA Historic Welterweight Champion: Volador Jr.

-The majority of the locker room spill into the ring to celebrate with Volador. They all pose for a giant group photo and celebrate a successful tour. 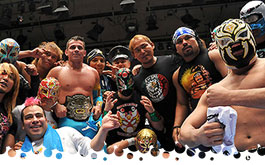 Final Thoughts: This was the NJPW version of a “B show” iPPV. It increased my enthusiasm for the brand and upcoming events, but if you’re on the fence about checking NJPW out, this is not the show to start with. It’s still a breezy show with a feel-good atmosphere, so we’ll call it Thumbs in the Middle.