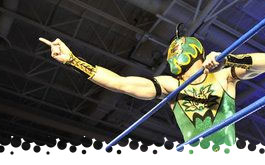 Zero gushes about making the semifinals of the Young Lions Cup tournament. Now, he faces his good friend, Green Ant, who made it to the semifinals without pinning anyone. Zero demands the best version of Green Ant in their match.

The Spoiler vs. Masked Enforcer #2

Enforcer is coming out of retirement to teach the current Spoiler to respect the original Spoiler. Enforcer dominates early with old school heavyweight offense, but he tweaks his own back while delivering a power slam. He further aggravates his back while hitting a powerbomb. Spoiler comes back with opportunistic attacks to the back. Spoiler does the Undertaker rope walk and elbow smash. Enforcer counters another rope walk and applies a bear hug. Spoiler escapes with clubbing blows to the back. Enforcer's back gives out again and Spoiler uses the ropes to pin him at 5:31. Spoiler has an over the top celebration, even though it was really Father Time that defeated Enforcer, **½.
Winner: The Spoiler

Donna Rama says she gets to choose which parts of her she shows others. Right now she doesn't have to intimidate anyone and will keep her dark side hidden, but next week she'll show us what she can do in a singles match. I like this gimmick.

They lock up and South hits an aggressive shoulder block. Max answers with an avalanche, sending South to ringside. Max methodically picks South apart, hitting a vertical suplex for 2. South grabs the hair and chops Max in the face! Max blocks a finisher and ties South in the ropes to pummel the chest. Max head butts the ribcage for another 2 count. South pops up for the Kiss of Death piledriver to win at 4:55. Serviceable power match, **.
Winner: Ricky South

Zero pinned all three opponents in his elimination match, compared to Green Ant who pinned no one (he won by DQ). Bell rings and the two pals engage in some chain wrestling. Zero builds some steam with a delayed vertical suplex for 2. Green Ant breaks out of a chinlock and drops Zero hard. They exchange open hand chops and Ant twirls into armdrags and dropkicks. Zero maneuvers into a nifty release suplex and applies a deep surfboard stretch, and then stretches him over his back. Zero hits a running knee, Ant reverses the pinning attempt, but Zero counters back into a fireman's carry lift. Ant escapes and controls the wrist while leaping around the buckles, Zero blocks, and they trade about a dozen quick counters until Ant forces Zero's shoulders down for 3 at 7:37! Great finale, ***.
Winner: Green Ant

Defarge immediately bums the crowd out by taking control with a knee lift to the gut. Quackenbush teases a flurry with a snapmare, but he's forced into breaking a wristlock. Quack goes after the mouth and applies a cravat. Quack salutes while blocking a gut wrench and nearly steals a pinfall. Quack flips all over the ring to overwhelm Defarge and hits a rana. Defarge cuts the flurry off with an uppercut, but Quack then monkey flips him over the ropes! Defarge looks for a dive, but Quack hides. Quack ambushes with a head kick and traps the arm and leg. Defarge licks his hand and rubs it into Quack's face to break the hold. Big running European uppercut by Defarge and backbreaker for 2. Defarge aggressively works over the back. Quack comes back with a flying knee. Quack holds on to a sunset flip in an extended headstand, but Defarge hits yet another uppercut. Big backbreaker by Defarge and Quack resorts to head butting the gut. Roundhouse KO kick by Quack leaves them both down. Quack sells his bad back while unleashing a flurry of offense, and a rana into a cover gets a great nearfall. Defarge survives a tornado DDT and Quack looks desperate. Defarge responds with an overhead belly to belly for another good nearfall. Backbreaker and lariat by Defarge isn't enough. Quack manages a super rana and applies a Stretch Muffler for the submission at 17:08! Really strong showing for the mostly unknown Defarge, and a cool "turn back the clock" performance by Quack, ***¾.
Winner: Mike Quackenbush

Final Thoughts: This episode focused more on in-ring action than usual and I liked what I saw. This CHIKARA class is really growing on me.