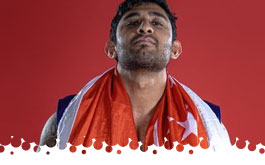 Razerhawk is at a loss for words ahead of his singles match with Dasher Hatfield. He hates pretending to be excited for interviews and all the bull that comes along with it. He doesn't want to "build up his opponent." Everything he hates about these interviews is what he hates about Dasher, with his fakeness and disingenuous manners. Dasher's victory over Danjerhawk has an asterix, just like when Razerhawk beats Dasher but doesn't win a belt.

From the Wrestle Factory in Philadelphia, Pennsylvania. Our hosts are Jason Worthington and Sidney Bakabella. My deep undercover investigation has revealed that all of these shows so far were taped before January 18th, so that hopefully means we have many weeks of wrestling in front of real humans to look forward to.

Dan wrestlers barefoot and looks like he's on vacation. Dan controls all the action and looks pretty green in the process. Zeller gets a token shoulder block, but Dan cuts him off with a uranage for 2. Dan regains his momentum and hits a funny mule kick. Zeller tosses Dan to ringside and misses a shot with Dan's flip flop, so Dan chops it over his chest. The ref allows it. Dan finishes with the Banzai Pipeline at 3:10. Dan has some personality but he was just spamming moves in this squash.
Winner: Cabana Man Dan

Mistress of Ceremonies Mayzie Caroline hosts an event center, asking CHIKARA stars what inspires them. The responses are pretty amusing, especially Spoiler, who says he inspires others with his old school ways and not this flippy stuff.

Striker is a Scottish werewolf punk, Zero is a masked office worker, Project is a naive goofball grown from a petri dish, and Donna is a nerdy girl morphed into a psychopath. Donna catches everyone off guard and cleans house, tossing Project into Zero's powerbomb, and spearing Striker. Donna hits Project with a backstabber and curb stomps him. Donna smiles sinisterly as she hits Project with German suplexes. Zero breaks it up and eats a Donna back suplex. Donna can't lift Zero into a fireman's carry, and Striker slugs it out with her instead. The guys figure out that Donna is trouble and pig pile her for an elimination at 3:15. That was fun. Project is only 40 months old and isn't sure what to do, making him an easy target for Striker. Zero seems protective of Project and gets caught in Striker's armbreaker, but reverses into a powerbomb for 2. Zero suplexes Striker for a good 2 count and stretches him over his knee. Striker shoves Project off the apron and hits Zero with a frog splash for 2. Zero Tolerance on Striker gets another good nearfall. Project tags in and hits a somersault splash on Striker and a split legged powerbomb! Back handspring moonsault by Project! Zero tags in and finishes Striker with a running boot at 8:20. Zero turns around and plants Project with the Unicorn Drop at 8:34! Great showcase for the wacky gimmicks and some good action to boot, ***.
Winner: Zero

Scoreboard - Singles Edition. Cabana Man Dan, Sonny Defarge, Boomer Hatfield, and Spoiler are in contention. Lucas Calhoun is ahead of the pack with TWO POINTS!

Crucible Rules (No Ropes):
Tunku Amir (with The Crucible) vs. Joe Not-so Exotic

Shotgun dropkick by Amir and a Judo Throw. Double stomp to the back by Amir and scoop slam. The jobber slides away but runs into a backbreaker. The jobber shows more life, so Amir punishes with a spinebuster and repeatedly slams his face into the canvas for the KO at 1:47. Every week they get a little closer to that 2:00 time limit.
Winner: Tunku Amir

The CHIKARA Event Center takes a look at the competitors still in the Young Lions Cup tournament. We are also treated to a proper introduction by the Masked Enforcer, the mystery guy who has been yelling at the Spoiler (I may or may not have been mentioning him in these recaps because I didn't know who he was, but I guess no one knew). The Enforcer stepped away from in-ring action years ago due to injuries, but he cannot stand the Spoiler's disrespect.

Dasher quickly traps Razerhawk in a headlock. Razerhawk escapes and forces the pace to quicken, but Dasher slows it back down by stomping the midsection. Razerhawk hits an armdrag but Dasher answers with a big boot. Head scissors takedown by Razerhawk sets up a suicide dive. Razerhawk's 619 is blocked by Dasher's mighty chest and a punch. Cradle Fisherman Buster by Dasher gets 2, as does a high elevation back drop. Razerhawk escapes a Full Nelson but Dasher chop blocks the knee and hits another back drop for good measure. Razerhawk blocks a chop and hits some of his own, but Dasher then kicks him off the buckles and his a Gory Bomb variation into the corner. Razerhawk blocks a third back drop and hits 619. Springboard crossbody by Razerhawk and missile dropkick. Flying tornado DDT by Razerhawk only gets 2. Razerhawk nearly steals it with a sunset flip combination but he misses a Swanton Bomb. Dasher hits a basic DDT for the win at 9:13. Solid outing here, with them telling a good story of Razerhawk learning from mistakes throughout the match to almost score the upset, ***.
Winner: Dasher Hatfield

Final Thoughts: This episode was lots of fun and provided some nice surprises. I kind of wish we knew more about Team Wrestle Factory's grievances with the Crucible, but considering that match is supposed to happen on June 20th, and we're in mid January as far as tapings go, we have some road left to travel. If you're looking for something different or aching for modern wrestling with a live crowd, give this a shot.