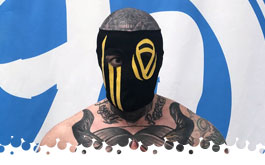 The Whisper is prepared to find out if Mobius is brave or stupid. He speaks like a super villain from an 80's cartoon.

The Whisper vs. Mobius

Mobius has a serious experience disadvantage, but holds his own with an even feeling out process. Whisper builds some steam using a short arm clothesline to set up an Arabian press. Whisper controls the action with would-be finishers but cannot put the rook away. Mobius comes back with a thrust kick and German suplex. Tornado DDT by Mobius gets 2. Whisper clocks the back of the head and finishes with the Aftermath at 4:47. Good little spotfest, **.
Winner: The Whisper

Video package highlighting the Cibernetico match over the years. This leads us to the event center, where Mike Quackenbush drafts his trusted allies Jigsaw and Mobius. Ophidian drafts top minions Princess Kimber Lee and Lance Steel.

Crucible Rules (No Ropes Match):
E.M. DeMorest (with the Crucible) vs. Tommy Knight

DeMorest is grateful that the Crucible took him in, so he must win. Knight leaps into DeMorest's arms and suffers a knee to the ribs. Knight shows some life and looks for sliced bread, but gets launched into the air instead. DeMorest finishes with a sit out powerbomb for the KO at 0:56. DeMorest took care of business in under 2:00, so he is spared the wrath of Ophidian.
Winner: E.M. DeMorest

We check in on the singles scoreboard. Anyone with a one match winning streak considers themself to be a contender.

Wells is a pure sports type representing Forged, Vertigo is too cool for this school, Spoiler is a mouthy masked man, and Green Ant is a green ant. I want to catch Ant in a net and give him to Blathers. Spoiler gets the best of Green Ant early on with methodical hip tosses. Ant answers with a flurry of offense. Wells tags in and exchanges holds with Ant. Vertigo tags himself in and disrespectfully kicks Ant out. Wells catches Vertigo with an enziguri, but Vertigo answers back with a stiff slam. Wells comes back with a missile dropkick. Spoiler returns and ties Wells up in the buckles for a free kick. Green Ant pops back and puts Spoiler in a modified sharpshooter, but Vertigo breaks it up for a spinebuster. Wells doesn't take Vertigo's trash talk kindly and they slug it out. Wells spins Vertigo with a lariat and I like his fire. Wells is interrupted by Spoiler but superkicks him off the apron. Green Ant and Wells trade lightning quick counters until Wells destroys him with a double stomp. Spoiler returns to walk the ropes and drop an elbow on Wells' forehead. Vertigo cleans house, but Wells counters his elbow drop into an armbar for a submission at 9:15! Spoiler, um, spoils the moment and puts Wells into a Claw for another submission at 10:15. Green Ant takes the fight right to Spoiler and hits a vertical suplex for 2. Spoiler then hits a blatant low blow and is disqualified at 11:17! This was an absolute delight until the eliminations set in. They're onto something with Wells and Vertigo, ***¼.
Winner via DQ: Green Ant

Back to the Event Center, brought to us by LIKABRO. We hear from oddball Oswald Project, who has no idea what the Young Lion's Cup is, but he wants it. Zero wants to win the Cup because his "father" (the original Zero) made it to the finals, but couldn't take it. Sonny Defarge wants the Cup in his grubby hands.

Dasher and Molly are a “niece and uncle” team, which might be a first. Dasher immediately hits a press slam on Razerhawk. He follows with an effortless shoulder block on Danjerhawk. Dasher gets countered, so he tags in Molly, who hits a glancing Pele kick. Dasher and Molly make quick tags and punish the tiny Danjerhawk around. Danjerhawk slips on his way up the buckles, but hits a missile dropkick anyway. Hot tag to Razerhawk, who slips on the ropes as well and takes an embarrassing spill off the apron. Danjerhawk eats a Doomsday Device but kicks out. Give me a break. Danjerhawk comes back with a facebuster on Dasher. Razerhawk tags and hits a head scissors takedown into the rope for a messy 619. Springboard body press by Razerhawk gets 2. Dasher tosses Razerhawk into the buckles and orders Molly to chop him on the apron. Molly thumbs the eyes and ducks Razerhawk's enziguri and he kicks the post hard. Danjerhawk kicks Molly in the gut but Dasher blocks his rana. Danjerhawk reverses into a rollup and stumbles through another springboard attempt, and Dasher hits a release overhead suplex. Dasher finally finishes with a DDT at 6:58. This was complete Botch-a-mania fodder, Dasher was the only guy who looked like he knew what he was doing, DUD.
Winners: Dasher Hatfield and Molly McCoy

Final Thoughts: Good episode up until that wretched main event. If I were them, I'd have just scrapped it. Check out the Young Lion's match to get a look at Wells and Vertigo and call it a day.