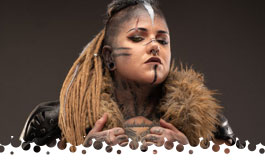 Razerhawk and Cyberhawk open the show with a wacky over the top promo comparing their opponents, Green Ant and Boomer Hatfield. They place on a bet on who will fair better. These guys are basically living anime characters, for what it's worth.

From the Wrestle Factory in Philadelphia, Pennsylvania. Our hosts are Jason Worthington and Sidney Bakabella. There are still real life human fans in the building, so we're still operating before the end of the world.

Defarge and his poor hygiene is probably responsible for at least 25% of COVID-19 cases in the greater Philadelphia area. Don't quote me on that. Thief Ant's schtick is that he can steal any opponent's moveset… like a thief. Don't look at me like that. Anyways, Thief Ant dominates the early going, so the only thing he's likely to steal from him is an ugly rash. Defarge gets into the fight when he licks his hand before applying a head vice, followed by rubbing his armpit in Thief Ant's face. He wipes his snot on the poor Ant in between hitting actual wrestling moves. Thief Ant comes back and slingshots his way into a somersault senton for 2. Thief Ant steals the armpit to the face, but Defarge opens with an overhead belly to belly suplex into the buckles. Defarge hits the Fever Dream for the win at 4:26. Good little TV match, **½.
Winner: Sonny Defarge

And now, a word from Grand Champion Dasher Hatfield, who also serves as a trainer at CHIKARA's school. He showcases some training drills, but I'm distracted by the Lotso Hugs Bear tattoo on his leg.

Fans beg Icarus not to remove his jacket and expose them to his hideous back tattoo, and he makes a show out of disrobing. He throws his jacket at the jobber and hits a running dropkick. Huckabee tags and goes after the arm. FIST hit a tandem Codebreaker/Facebuster. The jobber's hot tag goes nowhere as Icarus hitsa back suplex, and FIST hits a double legsweep to set up Custer's Last Stand for the win at 3:45. Good squash.
Winners: FIST

Cibernetico Special Report: Team Crucible will be captained by the obvious choice, Ophidian. The opposing captain will be Mike Quackenbush, who seems to have recently celebrated his fifteenth annual 29th birthday.

Forged are looking for payback after recently suffering a parking lot beatdown by the Crucible. Ibanez starts by trapping the head of Steel, who counters into an armbar. Ibanez has some technical chops and reverses into a sleeper. Flying crossbody by Ibanez sets up a double stomp from Wells and splash from Faraday. The menacing Devantes tags in and absorbs many shots from Faraday. Forged attempts a triple team beatdown, but Amir breaks it up. Amir punishes Ibanez with a backbreaker and overhead slam. The Crucible work Ibanez over in their corner. Ibanez survives with a jawbreaker on Steel, but Amir blocks a tag and puts him in a Camel Clutch. Ibanez escapes and hits a tornado DDT and Faraday gets a hot tag. He bounces off Devantes' chest but drops him with an enziguri and lands a springboard moonsault from outside the ropes! Match breaks down and sadly Amir plants Faraday with a helicopter fireman's carry slam for the win at 7:52. This was super fun, ***.
Winners: The Crucible

The Score Board checks in with the tag team ranks. Champions The Bird and The Bee are thirsty for competition. Wins and losses definitely matter around here.

The jobber enjoys a considerable size advantage, but Razerhawk quickly ties him up like a pretzel. Razerhawk hits a head scissors takedown and missile dropkick. He can't hit a Falcon Arrow but settles for a seated jawbreaker. A Pendulum-style Razor's Edge finishes at 2:04! This was a medium rare squash.
Winner: Razerhawk

CHIKARA Event Center, brought to you by LIKEABRO. Molly McCoy, the "niece" of Dasher Hatfield, has strong word for her “cousin” Boomer Hatfied. She's coming for family blood! We also hear from Donna Rama, who promises to show us what she can do in the ring. Jack Ball wants to be the first to bring the Trophy back to the U.K. The Red Queen and One Eyed Jack are human playing cards and can beat any house.

Ball is a plucky British lad, Slamovich is a fiery Russian redhead, Max is an intimidating woman, and Boomer is an old timey baseball star. What happens when these four walk into a bar? Ball and Slamovich start with some grappling. Ball gets cute with his counters and they reach a stalemate. Ball controls the wrist and walks the top rope and hits high elevation arm drags. Max the Impaler tags in and knocks Ball out of the air. Boomer tentatively accepts Impaler's test of strength, but pulls her into an armdrag, and manages a head scissors into the corner. Impaler drives Boomer into the buckles and avalanches him. Impaler misses a leg drop and rolls out, allowing Slamovich to hit Boomer with a vertical suplex. Powerbomb by Slamovich, but Boomer kicks out, so Ball ambushes with a hard dropkick to the head. Ball inadvertently slaps Impaler and tries to feed Slamovich and Boomer to her, but gets pummeled by the women. Impaler shoves Slamovich into Boomer's springboard shoulder block. Boomer and Slamovich dump Impaler to the floor, and Slamovich lands a suicide dive. Ball leaps off the top ropes onto the field. Fans reward them with “This is awesome!” Slamovich catches Ball with a Tiger Bomb for the pin at 8:49! Impaler plants Boomer for a pin at 9:10. It's down to Impaler vs. Slamovich in a singles fight. Slamovich manages a desperate German suplex for 2. Snake Eyes by Impaler and a spear finishes at 10:53. Man, I didn't know who Impaler and Slamovich were before, but I sure do now, ***½.
Winner: Max the Impaler

Final Thoughts: This show is settling into a nice groove. This was an easy hour of wrestling that made me smile often.