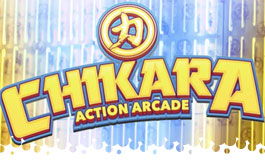 From the Wrestle Factory in Philadelphia, Pennsylvania. Our hosts are Mike Quackenbush and Sidney Bakabella. This was taped sometime before the whole world went to hell, as there's a live audience.

Donna Rana arrives with her luggage and introduces herself to Lucas Calhoun. She says she's heard some crazy things about CHIKARA and Calhoun says she'll have to experience it for herself. Cue the opening package.

Campeonas de Parejas The Bird and the Bee (Willow Nightingale and Solo Darling) vs. The Colony (Green Ant and Thief Ant) Yeah, CHIKARA's tag team champions are women, so what, wanna fight about it? Willow shakes hands with the Thief before a sporty exchange. Quick tag and Willow slams Solo onto Thief. The Colony comes back with a tandem clothesline to isolate Solo. Hot tag to Willow, who outmaneuvers Thief into a spinebuster for 2. Solo returns with Daniel Bryan kicks to Green Ant, but Thief kicks her away. THe match breaks down with Willow fighting off the Colony and catching Thief with a top rope arm drag. Solo puts Thief into the Sharpshooter for the submission at 5:48. Just a straightforward exhibition, **.
Winners: The Bird and the Bee

Calhoun explains to Donna that CHIKARA hasn't had a weight class or gender division in over 15 years. Donna's mind has been properly blown.

The Spoiler vs. Some Guy Who Should be Flipping Bakabella's Burgers

Spoiler immediately boots the face and nails a hip toss. Spoiler walks the ropes like Undertaker for an elbow smash, followed by a flying splash to the back. Powerslam by Spoiler and the Iron Claw finishes at 2:25. Inadvertently funny squash as a small guy squashes a slightly bigger guy with heavyweight offense.
Winner: The Spoiler

Boomer Hatfield is the "son" of CHIKARA Grand Champion Dasher Hatfield, and is liked by the crowd. Huckabee goes right to work dissecting the arm. Boomer comes back with a springboard arm drag and somersault senton to the chest Huckabee cuts him off with a clothesline and attempts an ankle lock. Huckabee misses a leaping uppercut and Boomer hits a slingshot senton for 2. Huckabee counters with a popup powerbomb and applies a modified Stretch Muffler. Boomer gets the ropes and hits an enziguri, following by charging uppercuts. Huckabee comes back with a thrusting head butt and brutal uppercut for 2. Huckabee hits a modified Cutter for a great nearfall. Boomer desperately counters with double knees and hits a release German, and low rana for the win at 5:30. Quack sells Boomer's win as an upset. Good sprint, **½.
Winner: Boomer Hatfield

Boomer returns backstage and is handed a contract and given a disc. Donna is just as confused as I am, so Calhoun explains that competitors earn the discs by winning matches and three wins in a row grants them a title shot.

Commercial for the official CHIKARA Action Arcade video game! It's available on Steam, but sadly not yet for Nintendo Switch.

Fake commercial for LIKEABRO. YA GOTTA WANT IT!

Video package putting over the Crucible, lead by Ophidian, as the current top heel stable in the fed.

The ring crew removes the ring ropes while Calhoun explains to Donna the rules of a No Ropes match.

Mike Quackenbush teaches some students how to grapple. Don't try this at home kids, instead pay to do it with Quack.

Crucibles Rules Match (No Ropes):
Devantes (with The Crucible) vs. Tom Storm

There is a 2:00 time limit set by Ophidian. Devantes just unloads on poor Storm and knocks the poor guy out with a slam at 0:37. They quickly cut away, which is disappointing, because I wanted to see how Ophidian would treat his guy.
Winner: Devantes

Special report on the upcoming Cibernetico. This is a multi-man match meant to highlight dueling factions. Team captains will be revealed soon. The history of the match is featured in a video package.

Interview with Matt Makowski. Jigsaw has been called back into action by Quakenbush to handle the Crucible, but Makowski plans on personally burning away his flesh.

Bell rings and they exchange holds while Quack puts over Jigsaw's legacy as a gen one CHIKARA star. Makowski more than holds his own in a grappling contest and forces some breaks. Jigsaw hits a leaping Frankensteiner and throws some chops. Makowski slingshots through the bottom rope to roll Jigsaw into a vicious arm bar, but Jigsaw escapes. Knee to the face by Jigsaw gets 2. They exchange pinning combinations until Makowski hits a potential KO kick. Makowski zeroes in on the arm. Jigsaw goes into survival mode, busting out of an O'Connor roll to land a kick to the face. Brainbuster by Jigsaw gets 2. Power slam by Jigsaw, but Makowski breaks the cover into a grapevine armbar. Jigsaw sells his injuries while hitting uppercuts, but Makowski pulls him into a Rear Naked Choke! Jigsaw maneuvers out and hits a thrust kick. Jigsaw's double stomp misses and Matowski rolls him into an armbar for the win at 10:47! I love it when a bad guy targets a body part and it results in a quick submission! ***
Winner: Matt Makowski

Final Thoughts: This was decent. I liked having Donna Rana serve as a stand-in for new viewers who may be confused by the unique-ness that is CHIKARA. There was some fine wrestling and they did an okay job establishing the Crucible as the current bad guys running the show. I may have suggested that Episode 1 needed an appearance by the Grand Champion, but I digress. I'll probably check out a few more episodes, especially since I'm starving for non-quarantine wrestling that wasn't produced by the McMahons.