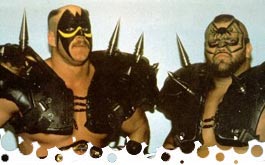 - Last time we uncovered some of the lost AWF footage, I wasn't surprised at all to see that the top faces are still Sgt. Slaughter and Tito Santana. Greg Valentine and Tommy Rich are the Tag Team Champions, with THE LEGION OF DOOM in the promotion to potentially be their top babyface challengers. Nails is still running around in his Nailz costume, likely ignoring one of many cease and desist letters sent to Bumphuck, MN or wherever the moron lived. We saw that The Blacktop Bully (paging WCW...) is in the company, as well as a few enhancement talents with questionable (ethnic) names. Did I mention LORD ALFRED HAYES is the new color commentator? Yeah, if you weren't working for the WWF, WCW, or ECW in 1996, chances are you worked for the AWF. TO THE ACTION!

- Last week, Bob Orton Jr., with a helpful distraction from MR. FUJI, attacked AWF Champion Tito Santana after having the nerve to pretend to have a crippling injury. When I recapped this episode last week, I don't think I mentioned Ken Resnick calling for help like Willy Wonka trying to help one of the rotten kids in his Chocolate Factory.

"The Z-Man" Tom Zenk vs. The Terrorist:

AWF debut for Tom Zenk. Should I spell it "Zink" since that's how it's spelled on the screen? He's nowhere near the levels he was at in WCW a few years earlier physically. Lockup and Zenk with a pair of arm drags. Mr. Fuji cuts an inset promo about pulling a "Pearl Harbor" on Tito Santana. Jesus, what is with this company? Zenk with a side headlock takeover, snap suplex, and snap mare for two. Mick Karch thanks the fan-base ON THE INTERNET for their support. Whip to the corner and Zenk follows in with a spinning heel kick. Whip to the ropes and a big kick to the chin gets three at 3:00 of Round 1. I think we can safely say this was the end of the professional wrestling road for Mr. Zenk. He'd quietly retire and become a popular guest on Dave Meltzer's radio show until disappearing from the face of the earth sometime around 2001 and unfortunately passed away in 2017.

- Cowboy Bob Orton and Sheik Adnan Al-Kaissey are standing by for comments. Orton is still gloating about beating up Santana. If he doesn't heal in time for his mandatory title defense, he's going to get the belt since he's the #1 contender.

- Ken Resnick is standing by for comments from AWF President Paul Alperstein. Why do I wish there was a flashing neon-sign over his head that reads "Money Mark"? Santana has a couple of cracked ribs from the attack and confirms that Santana would be stripped if he cannot defend the title, but a new tournament would be held instead of the title being handed over to Orton.

The in-ring AWF debut of Animal and Hawk. I incorrectly identified them as "The Legion of Doom", since that's a WWF trademark. They come out to the "Iron Man" remix, a far cry from the generic music everyone else uses. They quickly clean house of their opponents. Hawk lays out Bane with a diving shoulder tackle and follows with a jumping fist drop. Hawk with a slam and leg drop. Animal sends him to the ropes and connects with a power-slam. Rico Suave and "The Family" are standing by for comments. Hawk with a gut-wrench suplex. Whip to the corner and Animal launches in with a clothesline. Doomsday Device finishes at 1:42. Rage didn't even try to help his partner! Typical LOD squash, it's still entertaining, at least in 1996.

- Ken Resnick joins the Road Warriors in the ring for comments regarding the Tag Team Division in the AWF. Animal says they're here to win the gold and follow through with what they promise to do. Basic promo here. At least the check (probably) cleared.

Sierra's valet is introduced from "Germany". I didn't know Cuba and Germany had that good of relations. The AWF sure does employ a lot of random women as valets. She insults the camera and sounds nothing like someone from Germany should. Sierra looks like an out of shape Rusev went back in time. Lockup and Sierra pounds away with right hands. Karch and Hayes waste little time talking up a feud between Sierra and Sgt. Slaughter. Storm throws a few desperate elbows, but Sierra cuts him off and continues to throw punches. Sgt. Slaughter cuts an inset promo on Sierra. Whip to the ropes, fist to the midsection, and Sierra with a modified Famouser (Alfred calls it the Havana Drop). He catches Storm off the ropes in the sleeper and that finishes things at 2:18 of Round 1. Post-match, Fantasy drapes the Cuban flag across Storm's unconscious body. Sierra takes things back to 1982, being forced to wake his opponent up.

- Ken Resnick is standing by with Konan 2000. Konan says that with the fans behind him he's going to the top. "Konan 2000 is here to stay. Konan 2000!" What a promo. The segment continues with "Angel Baby" bothering Resnick about her "boyfriend" coming to the American Wrestling Federation. She won't identify him by name, using 50's lingo the entire time, even if it doesn't make sense.

Mick Karch lets us know this is our "Main Event." Lord Alfred calls Chief Charlie "Chuck Norris" and says he should go back to being a Texas Ranger. Heel Alfred RULES. 3 of the 4 men in the match don't. Norris and Hughes start. Lockup into the corner, Norris avoids a cheap shot and unloads with chops. Whip to the corner and he meets Hughes' boot on a charge attempt. Hercules (with a new haircut and with a gut) comes in to trade blows with the Native American Superstar™. Adams with a knee lift and seated toe hold. Hughes with a boot to the back of the head, followed by a headbutt. Hercules with a press slam but misses a splash. The canned reactions are obvious when EVERYONE ON CAMERA IS NOT REACTING. Adams goes to the top rope, but Adnan shakes him down, causing him to crash across the top rope. For reasons unknown, Mr. Fuji is watching from the aisle. Hughes with a slam and elbow drop as Round #1 ends.

- Between Rounds, "Boogaloo Brown" and the Texas Hangmen are standing by in the Warriors Corner threatening everyone with their arrival next week.

Hughes goes back to pounding on Adams to start Round 2. Hercules, out of shape, balding, and with short hair, looks like Barry Darsow. Maybe it IS Darsow pulling in a second paycheck. Whip to the ropes and Hercules with a clothesline. Karch mentions a show on October 19th in Minnesota. Hmmm... we'll check in on that in a little bit. Norris staggers in to try and help Adams, but he's as useful as a poop-flavored lollipop. Hughes chokes Adams across the middle rope but straddles himself attempting a seated splash. Norris with the hot tag, putting the boots to Hughes. Whip to the ropes and he takes him over with a back drop. He runs wild with chops on both men. Adams in to hit Hughes with a Super-Kick. Hercules uses the tights to toss Norris out of the ring and saves Hughes from the wrath of Adams. Adnan distracts the referee, allowing Hughes and Hercules to mercilessly choke Adams in the corner. All four men continue to fight, and the referee finally calls for the bell at 3:53 of Round 2, ruling the match a Double Disqualification. SERIOUSLY, ONE OF THESE GUYS COULDN'T JOB?! This was cookie-cutter stuff. IT wasn't embarrassingly bad, but it wasn't good, either.

The action is STILL going on as Commissioner Jim Brunzell and President Paul Alperstein (President Einstein, according to Hayes) come to the ring to maintain order. I haven't seen an out of shape money mark get involved in the action since the days of Herb Abrams. God, these awful shows bring the best out of me sometimes.

- Ken Resnick is standing by with Koko B. Ware and "Mr. USA" Tony Atlas. How come they don't have a random valet, and don't tell me Frankie is a valet! Resnick reminds us that guest referee VIRGIL was responsible in costing them their Tag Team Title Match against "The Family." Resnick converses briefly with Frankie to earn that paycheck. Atlas can't understand why a friend like Virgil could take their only dream away (wouldn't Atlas' true dream being a foot parade on his face?).

- Ken Resnick continues to be over-worked, standing by once again with President Paul Alperstein. Bob Orton is suspended indefinitely from the AWF for his actions, and he "wants to see Mr. Fuji in his office as soon as possible."

- Next Week: Konan 2000, The Texas Hangmen (with Boogaloo Brown), and Angel Baby and Her Boyfriend™ will be here next week.

- Tito Santana is "live on the phone", sitting on his couch at home. He pleads with Alperstein to not suspend Bob Orton because he wants to get his hands on him in the ring. He offers to defy doctor's orders to defend the title against Orton NEXT WEEK. Alfred Hayes suggests he see a psychiatrist.

- Before we get to my Final Thoughts, there definitely was an AWF card held on October 19th, 1996, from the Moore Middle School in Anoka, MN. The card featured: Wayne Bloom def. Lester The Jester... Tom Zenk and Billy Blaze def. Number 14 and The Hater... Horace The Psychopath def. Lenny Lane... Dan Jesser def. J.B. Trask... Sgt. Slaughter and Tito Santana 2xCO Blacktop Bully and Nails... Horace The Psychopath won a Battle Royal. For the names you don't recognize, all were from the Minnesota area and no, nothing much to say about any of them. This card is the last of the "Alperstein era" of AWF, according to sources.

Final Thoughts: Just another show with a mix of washed-up has-beens and never-were guys trying to pretend it's still the mid 80's. The wrestling isn't good, and there's too heavy of a reliance on the taped promos (poor Ken Resnick), but there's some entertaining stuff here for the wrong reasons. I've got one more episode to watch, maybe we'll known who Angel Baby's boyfriend is.