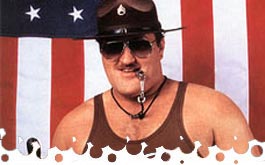 - From the WWE Hidden Gems section of the WWE Network, it's the "unaired" pilot of the infamous TEAM CHALLENGE SERIES. Some years ago, I did a multi-part series (that I personally enjoyed and recommend giving a look, which is something since I'm hardly a shill for myself) that covered highlights of the Team Challenge Series, which ran from November 1989 through August 1990. It followed the same format as the Scooby-Doo Laff-a-Lympics: Three teams, one captained and comprised of villains, and points were awarded in asinine manners, like in slam matches, football challenges, and every other gimmick you could imagine. You could even earn points against non-team competitors! In one update, there was a legit 11 wins and 5 losses combined for the teams, which means 6 wins came from somewhere, likely the imagination of Verne Gagne.

- Verne Gagne, with doggy in hand and probably on his own property (before having to sell it when he went bankrupt) welcomes us to the beginning of the ground-breaking "Team Challenge Series." He doesn't offer us any details (knowing the legacy of the TCS, is this a surprise to anyone?), but he's so excited, he might come out of retirement, again (just kidding...no, that's not me, he said the just kidding part before I had the chance to make a smart-ass comment). We through it to Ralph Strangis and Greg "Nepotism is the Real Deal" Gagne, who are hanging out in the new control room with new super-duper turbo technology (or likely, Verne's den). "We're going to see wrestling like we've never seen it before."

And IMMEDIATELY, we can't stop laughing at the poor AWA because the ring entrance, or I should say "ring entrance", is in front of a TERRIBLE GREEN SCREEN, WITH SEPARATE VIDEOS OF FANS ON EITHER SIDE. I don't even know what they're going for with this. Are they trying to pretend the fans are really in attendance, because Jammer is playing to the non-existent audience? It doesn't matter, because THEY'RE WRESTLING IN AN EMPTY ROOM, TOO. Unfortunately, it's not the empty PINK room that lives in infamy. No bell rings, probably another budget cut. Lockup and Burton with a hip throw as we cut to "fans" reacting. Burton with a slam, WITH AN INSTANT REPLY AND BONUS SOUND EFFECT. Jammer with his own hip toss and slam. We clearly cut ahead to a different part of the match. Jammer with a powerslam and "Surfer Splash" for three at 1:41. Strangis asks Greg again to "punch the button" for the replay. For the third time, we cut to audience shots that are clearly taken from what was likely Bowling on ESPN.

- Baron von Rashke (Captain of the Baron's Blitzers) and Sgt. Slaughter (Captain of the Sarge's Snipers, and wearing his G.I. Joe jacket) are hanging by, talking about a "friendly" rivalry. Rashke's man Paul Diamond is going to face Slaughter's man, Col. DeBeers later tonight. I guess the gimmick of the match is an over-the-top-rope challenge, based on their promos.

- The Destruction Crew, with SLEDGEHAMMERS in hand, cut a promo in front of an obvious green screen of downtown Minneapolis.

The Crew are Mike Enos and Wayne Bloom, better known for their days in the WWF as Beau and Blake Beverly. They do the green-screen entrances, AGAIN. Somehow, Valiant ISN'T the biggest joke in that shot. Yes, the Jerry Lynn here is the one who'd gain fame years later in ECW as well as being an Indy darling throughout the 90's. More shots of the fake audience. This feels like an episode of Married...with Children, where a fake wrestling show takes place in a TV studio without an audience. Enos takes over Rice with an arm drag. Rice fights out of a headlock, but Enos comes off the ropes with a shoulder tackle. Crisscross and Rice with a hip toss, followed by a pair of arm drags. PUNCH THE BUTTON, GREG. Whoops, sorry, he didn't ask for it that time. Lynn grabs the arm and hangs on with an arm-bar despite a slam attempt. Whip to the corner and Rice with a monkey flip. Enos goes to the eyes and tags in Bloom, who immediately gets taken over with more arm drags. Bloom misses a diving tackle into the corner. This time REALLY PUNCH THE BUTTON. Someone shut this guy up. Enos with a cheap shot from the apron to knock Lynn into a coma. Bloom with a back suplex. Whip and the Crew with a double elbow (called a clothesline by Strangis). Enos with slam into the corner and a back breaker. Whip and a powerslam (PUNCH THE BUTTON) gets a "two count." Doomsday device finishes at 4:53. Gagne calls for a DQ because moves off the top are illegal. What, was Bill Watts booking this, too? This was the basic fundamentals of wrestling wrapped in a box of horrible TV production.

- Post-match, ERIC BISCHOFF is in the ring to get comments from Johnny Valiant and the Destruction Crew. If people don't want to get hit with the Destruction Device, they shouldn't get in the ring with them. They're on the team of Larry's Legends, by the way.

- Sgt. Slaughter cuts a promo about "that scum" Col. DeBeers, who happens to be on his team because men were selected randomly for this Team Challenge Series, according to Strangis and Greg Gagne.

- Strangis and Gagne are in the control room to talk more about the Team Challenge Series, and despite this being the premiere of the series, WE'VE ALREADY GOT HIGH SCORING! Larry's Legends inexplicably leads with 16 points, with Baron's Blitzers in second with 15 and Sarge's Snipers with 13. The Yogi Yahooies have failed to put points on the board as of this moment.

The only way to win is to throw your opponent over the top rope, otherwise an illegal maneuver. Diamond represents the Blitzers and DeBeers represents the Snipers. I can't believe they keep doing these green screen entrances. I hope whoever came up with this considered suicide. Just think...DeBeers would be featured in an even BIGGER travesty in an empty room (a pink one, at that) with a turkey involved. Lockup, DeBeers with a side headlock and a shoulder tackle. Diamond with a flying head-scissors. DeBeers escapes and stomps on the back of Diamond's head. Whip to the corner and Diamond with another head-scissors. He misses a dive into the corner, hanging himself up across the top rope. DeBeers pounds on his back but can't throw him over. Crisscross and Diamond hits a dropkick that misses by a mile BUT PUNCH THE BUTTON ANYWAY! DeBeers quickly regains control with a back suplex. DeBeers goes to the top and hits a falling headbutt. Why did the referee count him down in a match where victory can only be attained by tossing someone out of the ring? Diamond hangs on as we get a ridiculous close-up of a "fan reaction." DeBeers misses a second headbutt. Diamond with a running knee lift and another unsuccessful attempt at throwing him out. DeBeers with an ugly bulldog and slingshot beneath the ropes. Diamond skins the cat but DeBeers knocks him out of an attempted head-scissors. He sets up for a piledriver but Diamond back-drops him out and to the floor for the victory at 5:50. Sarge's Snipers remain in 3rd place with the loss.

Sgt. Slaughter vs. The Terminator:

No, he's not fighting Arnold Schwarzenegger, it's some ridiculous looking scrub that looks like a wannabe member of the Powers of Pain. I wonder if his finisher is the (Sarah) O'Connor Roll? Lockup and Slaughter is looking a bit beefy. He shoves Terminator into the corner as I expect a PUNCH THE BUTTON call. Slaughter takes exception to a cheap-shot in the ropes... and we PUNCH THE BUTTON. Jesus, give it a rest. Whip to the ropes and a shoulder tackle doe nothing. This guy is maybe 6'1" and 230 pounds, don't act like he's The Warlord. Slaughter rides him on the canvas with a side headlock. The Terminator fights out, but Slaughter comes off the ropes with a body press for two. Say it with me: PUNCH. THE. F*CKING. BUTTON. Terminator goes for a slam but Slaughter lands on top of him (BECAUSE HE'S FAT). Terminator goes for the eyes and pounds away. PUNCH THE BELLY. They cut to fake child fans AND ONE OF THEM IS YAWNING. Good Gravy. Slaughter makes the Real-American Hero Comeback (YO JOE), taking the Terminator over with a back-drop. Slaughter manages to throw a dropkick and follows with a short-clothesline. Did Strangis say these two soft-bodies are in GOOD SHAPE? Slaughter with the Slaughter Cannon (second rope clothesline) (kids high-five each other) Cobra Clutch finishes at 6:45 as Strangis wants to punch his button one more time. Somebody has a personal problem.

- Eric Bischoff interviews Sgt. Slaughter at ringside. Despite being a basic match, Slaughter seems incredibly gassed, but insists he's in the best shape of his life. #LIAR.

Final Thoughts: I honestly feel bad for Verne Gagne, having to resort to THIS level of production to maintain a presence on national television. The wrestling wasn't very good (the Tag Team Match and "King of the Hill" Challenge were watchable, I guess), but the overall presentation is a complete joke. Where do I start? The piped in crowd noises for the non-existent crowd? The random shots of an audience from anything but this taping? THE SHOT OF A KID YAWNING? The wrestlers playing to the videos of the audience via green-screen effect? The PBP commentator constantly asking for instant replays (PUNCH THE BUTTON!!!)? THE POST-PRODUCTION SOUND EFFECTS OF THE SPOTS IN INSTANT REPLAYS?! THE PREMIERE OF THE TCS AND 46 POINTS HAVE MAGICALLY BEEN DISTRIBUTED TO THE TEAMS?!?!?! Highest Recommendation to see a once-great promotion stood to absolute lows (except for the pink room. That came a month later!).