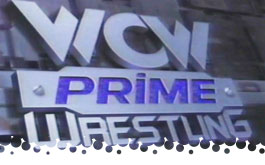 - Welcome to another one of Infinite Devil Machine's B-show reviews. WCW's hot off the arrival of Hulk Hogan into WCW with the Hulkster in a desperate war with the villainous (and often hilarious) Dungeon Of Doom. Of course, we won't see The Red and Yellow orange skinned goblin on the show himself. He's much too important to the landscape of WCW to lower himself to squashing some ham-n-egger on a B-show like Prime.

- But lets stop wasting time! Its time to see the best and brightest of the bottom of WCW's collective barrel in all the action you can handle!

Johnny B. Badd vs. Larry Starr

Oh boy, its Johnny B. Badd out to squash some poor schlub. Johnny B. Badd is what would happen if a mad scientist with nothing better to do crossbred an amateur boxer with Liberace doing really awful blackface. Marc Mero is a born again Christian now who looks like Michael Jackson if MJ hadn't died 50 years too young.

- Lockup and Starr goes to a headlock, Badd shoots him off, leapfrogs Starr twice and they blow a monkeyflip spot. Back up, Badd scores with a backdrop and a running kneelift. Badd threatens a punch and Starr backs off to the corner. Lockup again and Badd scores a single leg takedown. Starr fights out as a I just notice that Starr looks like the bizarre love child of Greg "The Hammer" Valentine, Fit Finlay, and Samoa Joe's wrestling tights. Up again, Starr clubbers away, but Badd cuts him off with a whip and a backdrop before scoring with a slingshot legdrop from the apron. Badd with a bodyslam, before throwing Starr to the floor to hit him with a running flip to the floor, just for the sake of a high spot. Starr thrown back inside and Badd springs in over the top with a turnover splash for the easy 3.
Winner: Johnny B. Badd
Rating: 1/4 * - Just for Badd's impressive maneuvering. Just an exhibition for Badd's offense.

The Barrio Brothers vs. Mike Davis and Larry Santo

Wow, talk about scraping the dirt underneath the bottom of the barrel here, right? The Barrio Brothers were barely above jobber status themselves. Dave Sierra, of The Barrio Brothers is probably best known for... uhh... challenging "Hacksaw" Jim Duggan for the WCW TV Title on an episode of WCW Saturday Night in 1999.

- Davis and Santana start, Davis with a series of arm wringers that Santana escapes with couple clubbing blows. Irish whip to the corner and a reversal and Davis comes off the second rope with a floatover crossbody block for two. Davis swings for the fences with a dropkick but Santana avoids it by holding the ropes. Tag and Sierra is in, off the top with a flying double chop before hammering away. Headlock and Davis with a whip and an armdrag. Sierra fights out and tags Santana back in. Santana in with some clubbering and an uppercut in the corner. Irish whip to the corner and Sierra in for an illegal whip clothesline from Santana followed up by one from Sierra. More boring clubbering, Davis scores with a sunset flip on Sierra, but Santana distracts the referee. Sierra scores a two-count off of a forearm shot. Barrio Bros. keep controlling Davis with some basic pounding and frequent tags. Sierra tags Santana in and they execute a crap version of the future Team Angle's signature hangman/leap frog double-team move on Davis. Barrio's keep controlling with choking, but Davis counters a vertical suplex from Santana with one of his own. Sierra tagged in quickly to maintain control, but Davis gets the boot up to counter a charge into the corner and nails Sierra with a clothesline. Davis with the lukewarm (at best, think a microwave dinner left out and thawed to room temperature) to Santo and Santo hits the ring like a well contained house of fire. Sierra absorbs a series of punches and counters an attempted whip with an elbow across the neck. Santana tagged back in and they finish Santo off with a lame Doomsday Device. Blech.
Winners: The Barrio Brothers
Rating: DUD - Just a boring formula tag-team squash. Nothing to write home about.

- Backstage, we see Dusty Rhodes and Chris Cruise. Dusty's rocking a witch hat and they claim to be in a "graveyard". We see "highlights" of the Hogan/Giant feud, where Giant threw "his father's" (implied to be Andre The Giant's) shirt at Hogan and crushed his motorcycle with a monster truck. Gotta love that mid-90's WCW cheese. Obviously, if you know your wrestling, you know this is leading to the terrible Hogan/Giant monster truck face off and Giant falling off the roof of Cobo Hall at Halloween Havoc '95. Also, the Ye-TAY/Mummy/Abominable Snow Yeti/Super Ninja/Ron Reese/Reese exploding out of a giant ice cube like a real life version of "Harvey Birdman's" Unfrozen Caveman Lawyer. But that's a whole lotta stupid for a whole 'nother show, folks.

- Back to the action, and we see a match that finally has some potential; Diamond Dallas Page vs. Alex Wright.

Man, I forgot how terrible Page's outfit was back in the early-90's. He literally looks like he's cobbled together his outfit from the scraps of other wrestler's costumes and discounted, sold "as is" fabric from the back of a quickly deteriorating Jo-Anne's Fabrics.

Lockup to start and Page with a big slam. He stops to taunt and Wright rolls him up for a super quick two count. Back up, Page goes to a full nelson and Wright chain wrestles Page into a an armlock before Page wrestles out into a front facelock. Page with a rolling facelock takedown and almost locks in a loose Dragon Sleeper. Wright counters with a mare and scores a nice dropkick. Wright with a series of arm wringers, Page shoots him off, Wright avoids an elbow and scores a crossbody that Page rolls through. Wright kicks out of a sloppy rope assisted pin attempt. Up again, Page tries for a vertical suplex but Wright counters into a small package that Page counters into a small package with the tights for the win.
Winner (and still TV Champion): Diamond Dallas Page
Rating: 1/4* - Basic match. Not bad. Page and Wright would actually have a much better and longer match at a Clash of The Champions around this time. Check that out. This was pretty much nothing.

- Here we go; its hype central for WCW Halloween Havoc '95 - Check out Machine vs. Machine as Hulk Hogan's Hulkamania Powered Red And Yellow Metal Machine goes one on one against The Giant's Giant Mobile!!! Also, Sting teams up with Ric Flair to be turned on...err... wrestle the dangerous tandem of Brian Pillman and Arn Anderson, Hawk takes on Kensuki Sasaki, Randy Savage attempts to avoid being eaten alive by the African nightmare Kamala and Johnny B. Badd tries to wrest the TV Title away from Diamond Dallas Page. Its time to get spooky, at Halloween Havoc!!!!!!

- Backstage we see Kevin Sullivan cavorting with "The Master", aka the father of future WCW TV Champion, Prince Iaukea. Is Hulkamania doomed?

This could be good. Bunkhouse Buck was decent and Savage was always good at bringing the best out of people. Robert Parker is probably best known as Jack Swagger's eventual work father in recent years or as Jeff Jarrett's pre-Debra manager in the WWF as Tennessee Lee in 1998 (Editor's Note: or as "Robert Fuller" if you like your Southern Rasslin').

Before the match starts we get a commercial break (check out Rockin' USA, the biggest hits of the 80's as defined by whoever picked that shit in 1995 and make sure to check out Pro Football Insider with whoever the Hell Fred Edelstein is, by the way) and as we return, Buck is stomping Savage down in the corner. Savage tries to comeback but Buck cuts him off with a rake to the eyes and a short clothesline. Buck with a stomp and a Camel Clutch. No confirmation however on whether or not Savage was humbled afterwards, though. Eventually, Savage fights out with a snap mare but Buck cuts him off with a clubbing blow and a neckbreaker for a series of two counts. Buck with a knee to the back and a surfboard hold. Back up standing, Savage tries to fight out but Buck chokes him over the top rope. Buck with another neckbreaker and some choking. Buck goes to the well a third time, but Savage counters a neckbreaker by grabbing the top rope. Savage scores a bodyslam and nails the flying elbow for the win.
Winner: "Macho Man" Randy Savage
Rating: 1/2* - Typical Savage formula. Savage gets beat down, gives up about 99% of the match, makes his comeback and wins in a couple moves. Typical B-show Savage stuff.

Prime Match of The Week: The Man of Question vs. Barry Houston

- In "the graveyard"/backstage Dusty and Chris Cruise (who's happily hugging a skeleton) give a quick push for Halloween Havoc '95 and we're out!

Final Thoughts: Its a WCW B-show in the mid-90's, before WCW opened their checkbooks up to every ex-WWF guy who could still stand on two legs and work a decent match. So, instead of Demolition Smash dressing like a golfer and jobbing to Saturn, we get boring matches from Hugh Morrus, b-show level Randy Savage, The Barrio Brothers, and a boring exhibition for Johnny B. Badd and a way too short match between Page and Wright. Watch this if old-school B-shows appeal to you or you're nostalgic for pre-NWO WCW. It was a more innocent time. And a more boring time.