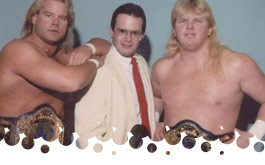 Taped on March 12th, from The Scope in Norfolk, VA.

Tony Schiavone welcomes us to tonight's program and doesn't waste time introducing us to Jim Crockett Jr. He's here to hype the 1988 Crockett Cup Tournament on April 22nd and 23rd. There'll be 24 teams competing, and the following teams have been confirmed as the Top 10 seeds. We then throw it to a pre-tape with Frances Crockett, running down all the teams...

Bob Caudle is standing by with Jim Cornette and the Midnight Express. Cornette is flipping out over his team seeded 4th, arguing in 1986 they were Champions and weren't seeded #1, then in 1987 when they weren't the Champions, the Champions were seeded #1. He promises to beat the Fantastics to show his momma that his Midnight Express are getting ripped off and to prove the Fantastics are bums that aren't worth their time. He says there better be some stand-by matches, because this won't take long.

The Midnights are the reigning NWA U.S. Tag Team Champions, and for those unfamiliar with the team, this is the Beautiful Bobby (Eaton) and Sweet Stan (Lane) version of the team. The Fantastics are Tommy Rogers and Bobby Fulton, making their NWA debut. I could've sworn the Fantastics used ZZ Top's “Sharp-Dressed Man”, but here it's some generic riff (and yes, this is the original broadcast version). This is introduced as a “Special Challenge Match.” Something awesome about the team from "The City of Angels" taking on a team from "The Dark Side." Fulton and Eaton start. Lockup to the corner and a clean break. They lockup again, with Fulton snapping Eaton over with an arm drag. Eaton with a side headlock and shoulder tackle. Crisscross and Fulton cuts him off with another arm drag. Eaton cranks on another side headlock. Lane gets the blind tag, but Fulton is ready for him. Whip to the ropes and Fulton sends Lane crashing to the canvas with a shoulder tackle.

We come back from a break, with Rogers coming off the ropes with a double axe-handle and taking Lane to the canvas with an arm bar. Lane breaks the hold with knees to the midsection. Rogers fires back with flat-footed boots and tags in Fulton. Eaton back in, unable to keep Fulton in the corner. Rogers takes Eaton out of his corner with a monkey-flip and we get a short conference between Bobby and Stan. Eaton puts Rogers down with a boot and loads up a roundhouse right. Lane tags in and accidentally takes Eaton out of the corner with a monkey-flip. Fantastics with a double hip toss on Lane. Eaton gets caught diving off the top rope and a double atomic drop sends the U.S. Tag Champs crashing into each other. Back inside, Rogers with a float-over arm drag into an arm bar, keeping Eaton on the canvas. Lane tries climbing in, but Fulton shakes the ropes, straddling Lane in the process. Eaton fights to his feet and blasts Rogers with another right hand.

Back from our second commercial break, with Fulton working the arm of Eaton. The one thing keeping Eaton in the match is his right hand, fighting out of every hold. Crisscross and Fulton with another arm drag into the arm bar. Lane loads up a Super-Kick, but Fulton hangs back on the ropes and struts. Crisscross and now Lane is hotdogging, joining his partner on the apron for a high-five. Fulton brings both in with a slingshot. Whip and the Fantastics with synchronized back body-drops and dropkicks to clear the ring. Things settle down, with Rogers and Lane as the legal men. Lane plants Rogers with a slam, but misses a jumping elbow drop. Rogers goes back to the arm and transitions into a later-press, but Lane bridges out. Rogers keeps Lane on the canvas, hooking the arms, but Lane keeps fighting his shoulders off the canvas. Eaton in and he's back on the canvas. Eaton avoids a right hand on the apron, feeling like he's avoided danger, but he's caught with a double-team body blow and running knee lift, sending him crashing to the concrete floor.

We're back from the next break and the Fantastics are still in control, taking turns working the arm of Beautiful Bobby. Things finally swing in the Midnights direction, as Lane catches Rogers off guard with a Super-Kick. Whip to the ropes, Lane with a drop toe hold and Eaton drops an elbow across the back of the head for a two-count. Eaton sits across the back of Rogers with a chin-lock. Rogers fights to his knees and breaks out of the hold with short right hands, only for Eaton to rebound and connect with a swinging neck breaker. Lane in, ramming Rogers in the lower back with a headbutt. Whip to the ropes and Lane with a sweeping clothesline for two. The Midnights aren't taking any chances, hooking the leg on every cover. Eaton with a right hand on the wide-open Rogers. Lane scoops Rogers up for a slam, but he counters. Eaton tags in as Rogers executes the roll-up and boots his head off.

When we return from the station break, Eaton is riding Rogers on the canvas with a chin-lock. He lets go of the hold to land a pair of short right hands. Rogers tries fighting from his knees, but Lane is in, punishing the back. Whip to the ropes and Rogers counters a back body-drop with a kick to the chest. Fulton with the hot tag, running wild with right hands on both Lane and Eaton. Referee Tommy Young cuts off Rogers, allowing the Midnights to hit a double-team flapjack for a near-fall. Lane with a blatant rake of the eyes and hair pulling. Eaton comes in for a double-team swinging throw, with Lane still using the hair on his end. Fulton struggles to his feet and gets knocked back down with a heel kick to the back of the head. Eaton with an elbow drop for two. He takes Fulton over with a suplex and gets two-count after two-count, trying everything to keep the shoulders down. Lane with a leapfrog body press in the ropes, then Eaton gives him second-helpings. Fulton luckily ends up near the ropes, getting a foot on the bottom rope to break up the cover.

Eaton has Fulton on the canvas, working the arm. Fulton escapes with elbows, but Eaton thumbs the eye and plants him with a slam. Bobby climbs the ropes and drops an elbow on the chest for a near-fall. Cornette with a distraction of referee Tommy Young, allowing Lane to throw Fulton over the top rope (a DQ in the NWA). Back inside, Lane with a snap mare and jumping elbow drop across the chest. Eaton with right hands and a choke in the corner. He brings Fulton to the canvas with a single-arm takedown and holds on with a hammerlock. Fulton ducks a right hand from Lane and connects with an atomic drop. Eaton takes a shot at Rogers on the apron to cut off the tag attempt. Whip to the ropes and Eaton with a spinning elbow. Whip to the corner and Eaton meets the boot charging in. Rogers FINALLY Gets the hot tag. He busts out a DOUBLE NOGGIN KNOCKER and rocks Eaton with a dropkick. Eaton cuts him off with a back body-drop over the top rope, then clobbers Fulton from behind to save Lane. Lane plants Fulton with a slam, but Rogers pulls him away from the Rocket Launcher, causing Bobby to crash land on the canvas. Now it's Rogers climbing the ropes and they hit the Rocket Launcher on Eaton for the three-count at 25:54 (shown)! The crowd is going crazy for the result, disregarding it was a non-title match. The five commercial breaks disrupting the flow makes it somewhat unfair to give a star rating, but this was, and I mean this with no pun intended, FANTASTIC. Everything looking so effortless, with highs and lows to keep the crowd from burning out too quickly but delivering the perfect finish at just the right time to get the best reaction you can possibly get for a match like this. What a risk for a company to make, dedicating the entire hour to one match, putting over a new babyface duo, and they beat the Champions using something out of their own playbook, clean as a sheet. I wish the uncut version was out there.

Watch Clash of the Champions, FREE OF CHARGE, tomorrow with a 4pm start time!

Tony Schiavone is standing by in the locker room with the Fantastics. Fulton thanks the fans who were with them all the way. Cornette's knocked them for a long time, and they just proved a point they weren't a fluke, and they beat them with their own move as the icing on the cake. We cut to a replay of the finish. I missed Lane being caught completely by surprise, ushered to the apron by Young as the Fantastics set up for the move, and having too little time to react and make a save.

Final Thoughts: An hour dedicated to the Midnight Express and Fantastics? Yeah, this was a breeze to sit through, with the only negative is those darn commercial breaks keeping us from enjoying more of the action. To honor the career of Bobby Eaton, it seemed only appropriate to find a gem of a tag team match. A flawless worker that was ahead of his time, Eaton defined the term "tag team specialist", having outstanding runs on a national level with two versions of the Midnight Express, working regularly with Arn Anderson as part of the Dangerous Alliance, and as his in-ring ability started to diminish, tapped into a guilty pleasure run as the Blue Bloods with Lord Steven Regal. He may not have the best look, or cut the best promos, but he was a work-rate guy back when it wasn't the cool thing to be, and more importantly, was one of those guys that nobody in professional wrestling could ever have a bad thing to say about, a guy always looking to do the right thing, willing to give you the shirt off his back. If you're unfamiliar with the career of Beautiful Bobby, you know where to search for some of that good content, you've be thankful to find yourself falling down that rabbit hole.