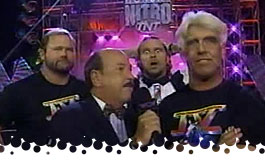 - Last week on Monday Nitro... Hulk Hogan and Ric Flair nonsensically ran in and ruined a World Championship Match between Randy Savage and the Total Package... The friendship between Sting and Luger continues to be a problem for some people, including Hogan and Savage... Harlem Heat successfully defended their recently regained Tag Titles against the American Males, but their manager walked away in the arms of Col. Robert Parker...

- Over on Monday Night Raw... Bret Hart got a cheap victory over a washed up and dug out of the ground Bob Backlund in a Non-Title Match (yes, THE CHAMPION couldn't get a clean win a non-title match over someone who hasn't been featured in a match since WrestleMania)... Aja Kong broke the nose of Chaparita Asari in a lop-sided contest... a young Jeff Hardy played the role of unknown Jobber to Owen Hart. Not the most stunning lineups. Should be an easy victory for WCW this week.

- We're LIVE from Charlotte, NC, with Eric Bischoff, Bobby "The Brain" Heenan, and Steve "Mongo" McMichael calling some of the action (at least the parts they paid attention to), unless otherwise noted.

For reasons unknown, the match starts without introductions, and you never hear music or announcements during the opening babble-fest between Bischoff, Mongo, and the Brain. Whip to the ropes, J.L. ducks a clothesline and goes for a roll up. Crisscross leads to a tilt-o-whirl backbreaker. Eddie with a scoop slam, followed by a somersault senton from the apron. Twisting back breaker gets two. J.L. fights out of a Powerbomb with an arm drag, but a body press is countered with a back breaker. Whip to the ropes, J.L. sends Eddie to the floor with a flying head scissors. They continue to flash great athleticism, but the crowd is mostly dead. J.L. with a suicide dive to finally pop the crowd. Back in the ring, J.L. with a vertical suplex for two. Whip to the corner and JL follows in with a dropkick. Whip to the corner, J.L. goes for a roll up, but Guerrero counters with a sunset flip for the three count at 4:23. *1/2 Heatless and pointless. They didn't seem to have much direction, and the lack of crowd response makes it worse.

- "Mean" Gene Okerlund interview Lex Luger and Jimmy Hart. Every time Luger and Savage meet, Luger winds up on top, and should be the WCW World Heavyweight Champion. You can't fault the logic there: He beat him convincingly at World War 3, and was in prime position to win the Championship Match last week if not for that no-good spotlight-hog Hulk Hogan.

I take it back... I LOVE Orndorff's butt-awful theme music. It's so damn cheesy. I still love Disco Inferno's theme music and energy. That's what I call commitment to the gimmick. Inferno attacks before the bell, stomping a disco ball in his butt. Speaking of butt, Disco Inferno's tights have "Monday Nitro Fever" on the fanny. Whip to the corner, Orndorff gets an elbow up on a charge and starts doing his own pounding. Orndorff with an inverted atomic drop and running axe-handle smash. He mocks Disco's dancing before dropping the measured elbow drop. Remember when Ric Flair would do an extended dance routine before the Figure-Four? This wasn't as awesome, but close. Orndorff with a back suplex, and it's over at 2:23. 3/4* Just turned out to be an easy squash for Orndorff.

- "Mean" Gene Okerlund is back, with Ric Flair, Arn Anderson, and Flyin' Brian. It's the Four Horsemen Minus One, as Chris Benoit's absence is not recognized... and no, that's not a WWE edit job. Remember, Flair and Double A will be in action tonight against the Hulka-Stinger-Maniacs. For whatever reason, Paul Orndorff interrupts things, taking exception to Pillman running his mouth, so we get a pull apart. Arn and Flair give him a Spike Piledriver on the concrete, and in WCW Land, that's as good as a death sentence.

.... AAAHHH!! Please, for the love of all that is Holy, don't be longer than 90-seconds. Update on Paul Orndorff's condition: He's hurt. Good to know. Duggan pounds away to start. Luger quickly turns the tide with his own pounding. Duggan regains control, sending Luger to the buckle. We thankfully cut away to watch Paul Orndorff taking a nap on a stretcher. Back to the "action", Duggan actually uses a hip toss. He strings together a clothesline and elbow drop, possibly performing the most moves in one match since 1987. They call a spot and move in slow motion to set up Duggan going for a loaded fist. Luger attacks from behind with the "loaded" elbow, and the Torture Rack finishes at 2:45. 1/2* So Luger is made to look like a chump, and only wins with a distraction from Jimmy Hart. Smart way to build your Starrcade Main Eventer.

- "Mean" Gene Okerlund interview WCW World Heavyweight Champion, Randy Savage. He's not just defending the WCW Title at Starrcade, but competing in the Best of 7 Series against Tenzan. On top of that, he defends the title next week against the Giant! He’s a mad man I tell you, a mad man!

I'm pretty sure I actually watched Nitro this week as it happened, a rarity since I almost always watched Raw. Loud "Hogan Sucks" chant before the match begins. Sting and Anderson start. Anderson grabs a side headlock, then counters a hip toss attempt with a fireman's carry. Crowd appreciates the heels tonight, apparently. Sting reverses a whip and takes Anderson down with a press slam. Hogan gets in a cheap shot to some serious heel heat. Hogan tags in and the crowd disapproves. Flair tags in, and you'd think the second coming of Jesus entered the ring. Hogan no-sells Flair's offense (surprised?) and works him over. Whip to the corner, Flair flips to the apron, and gets taken out by Sting. Anderson attacks Hogan from behind and has very little success, as well. Flair with a cheap shot, making Hogan, at least for a few moments, your "face"-in-peril. Hogan hits a clothesline from out of nowhere and tags out to Sting. He takes Flair down with a press slam, followed by his hip toss and dropkick combo for a two count. Sting with mounted punching until Flair counters with an inverted atomic drop. Anderson to the top, only to get slammed off. Sting with the Scorpion Death Lock applied, but Flair interrupts. Sting applies it to Flair, only for Arn to plant him with the DDT.

From out of nowhere, Jimmy Hart and Lex Luger make their way to ringside. Luger pulls Hogan off the apron and locks him in the Torture Rack at ringside! Meanwhile, Sting gets his knee worked over for an extended sequence (by Nitro standards). He goes for a desperate tag, but nobody home. Flair clips the knee and unloads in the corner. Flair locks in the Figure-Four, and gets some assistance from Double A for extra leverage. Flair slaps Sting around until Sting starts no-selling and does the Tarzan chest beat. Hogan gets the tag, but Anderson distracted the referee, so it doesn't count. Bischoff constantly trying to convince us that the crowd is behind Hogan is laughable. Sting stands tall to Flair's flurry of chops, then slams him off the top rope for a two count. Flair hooks the ankle to stop the tag, allowing Arn to continue punishing the Stinger. Whip, and Sting comes back with a bulldog. Hogan finally gets the hot tag (to almost little reaction), and gets planted with the spine-buster... and it's no sold. You fuck. Hogan with three rights, a big boot to Arn, a big boot to Flair, and the leg drop on Arn for three at 13:29 (no commercials!). Crowd boos that result. Pillman comes out to attack Sting from behind... but Luger makes the save, and directs Pillman to help Flair and Arn work over Hogan. Sting makes the save for Hogan while Luger looks on. Savage comes out to get in Sting's face... and STING lays SAVAGE out! **1/2 Good match, taking away the crowd shitting all over Hogan and cheering madly for Flair. Post-Match we get another long-winded interview. Yay.

Final Thoughts: Strong Main Event and very little else. This week’s episode is more notable for such a crowd backlash against what WCW was presenting them, and WCW continued to push things in a direction that nobody wanted. The stuff with Sting and Lex Luger continues to keep my interest, but holy crap was this a weak show until the final match. Guerrero and J.L. worked a heatless opener, a pointless squash for Orndorff only to write Orndorff off TV with an injury, and LUGER vs. DUGGAN. I'd check out Sting and Hogan vs. Flair and Anderson, and skip the rest. Only slightly better than Raw, I guess.