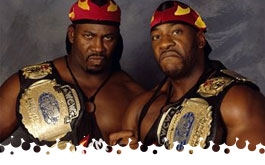 - Last week on Monday Nitro, Sting and Luger continue their bizarre friendship with a victory over Arn Anderson and Brian Pillman. I only say bizarre because faces and heels being friends was something that wasn't done very often, if at all. That's more of an "Attitude Era" thing, and even then, you never saw heel Undertaker maintaining a friendly relationship with babyface Kane. There was a Joshi Puro match that we'll ignore happened since they were only on loan for a few dates, and who knows where the Diamond Doll's heart is. Oh, and Hulk Hogan squashed Hugh Morrus (to boos) and beat up Ric Flair for no good reason.

- Over on Monday Night Raw, Sycho Sid and Marty Jannetty "headlined" and went to a no contest, because MARTY JANNETTY needs protection against SID. Elsewhere, Razor Ramon successfully defended the Intercontinental Title against Dean Douglas in what might've been the final in-ring appearance of Mr. Douglas, and the British Bulldog made short work of Bob "Spark Plugg" Holly. They also held a Very Special Interview™ with Shawn Michaels, who may or may not be able to return to the ring (Spoiler: He does). Doesn't look bad, but doesn't really excite me, either.

- We're LIVE from Phoenix, AZ, with Eric Bischoff, Bobby "The Brain" Heenan, and Steve "Mongo" McMichael calling the action (some of the time) unless otherwise noted.

(Booker T & Stevie Ray vs. Marcus Bagwell & Scotty Riggs)
Wait... (checks the date) if they give the American Males another damn Championship reign, I'm done recapping Nitro... for 5-minutes. Harlem Heat regained the belts some time ago, but it's barely mentioned. Is it racially insensitive for me to call her "Sista" instead of Sister? Sister sounds like she should be a Nun or something. Stevie and Riggs start. Lockup into the corner, with Stevie pounding away. Riggs comes back with dropkicks for barely a one count. Stevie reverses a whip and connects with a side slam. Riggs ducks a jumping heel kick from Booker and comes back with a diving forearm. The Am-Males with some double teaming. Bagwell with a sunset flip on Booker for two. Col. Robert Parker shows up to continue this nonsensical angle with Sherri. Riggs posts his shoulder on a charge attempt, and gets to play face-in-peril. Stevie Ray with an impressive forward powerslam as we cut to ringside with the Managers. Back in the ring, Booker takes Riggs over with a snap mare, but misses an elbow. He no-sells the drop, does a SPIN-A-ROONI (to no reaction), and connects with a jumping heel kick for a two count. Stevie Ray with a drifting back suplex for two. Booker with a flurry of knees and a jumping roundhouse kick. Riggs sells it like he's dead. Riggs Returns from the Dead and rolls him up for two. A.C. Green is at ringside, possibly screaming about the importance of abstinence. Harlem Heat with a double front suplex. Booker tries a splash from the second ropes, but meets knees. Bagwell with the hot tag and unloads with rights. Stevie does some awkward spot with Bagwell, and Booker finishes with a somersault leg drop (Harlem Hangover) at 7:47. ** Not as bad as I was expecting, but the crowd seemed to react more positively to Harlem Heat, and mostly ignored the Males hope spots.

- "Mean" Gene Okerlund interviews Sting and Lex Luger. They're both going to be involved in a Triangle Match, along with Ric Flair, at Starrcade in about three weeks. Sting recognizes his friendship with Luger, but doesn't approve of his business choices with Jimmy Hart by his side. Luger predicts he'll be walking out of Monday Nitro as the NEW WCW World Heavyweight Champion, yet another high-level match given away for free.

Yep, Sting simply finishes the interview while Luger heads back to the locker room. A.C. Green is at ringside, if you haven't noticed yourself. No Robert Parker with Kurasawa. Probably busy getting him some of Sista' Sherri. Lockup, Sting grabs a headlock. He rocks Kurasawa with a dropkick, and sends him to the floor with a clothesline. Kurasawa drags him to the floor and pounds away. Back in the ring, Kurasawa with a knee to the midsection and some goofy laughing. He starts working the left arm, and in case you forgot, he once broke the arm of Road Warrior Hawk (allegedly). Sting fights back with rights and chops. He sends Kurasawa to the corner and follows in with the Stinger Splash. He slaps on the Scorpion Death Lock, and it's over at 2:38. 3/4* Practically a squash match. I don't think Kurasawa has much momentum going for him.

- Starrcade is coming! It's New Japan Pro Wrestling taking on the stars of WCW (and unofficially representing America, including the Canadian Chris Benoit).

Scott Norton vs. The Giant (w/ Jimmy Hart & The Taskmaster):

Heel vs. Heel, again. That always makes a lot of sense. Will Norton do a clean job, or will WCW actually book a dumb finish with the Giant involved? Lockup, and neither man gets an advantage. Norton grabs a headlock, but a shoulder tackle easily goes the Giant's way. Another lockup, this time Giant clubs him across the back and plants him with a scoop slam. Norton ducks a clothesline and actually picks the Giant off the canvas for an atomic drop! Norton remains in control (boo!) with clubbering. He comes off the ropes with a pair clotheslines, but jumps off the top rope, right into the grip of the Giant. Giant with the Super-Sized Choke-Slam, and it's over at 2:45. 1/2* I wasn't too keen on Norton getting that much offense and the Giant selling for an extended period of time, but whatever. It's WCW.

- Charles Barkley makes an appearance, not looking nearly as fat as he does now. He comes to the ring with Ric Flair. It's nothing more than 5-minutes of sucking up to the local fans, despite Ric Flair being a heel. Oh well, it's WCW.

Jimmy Hart has a new, airbrushed jacket with Lex Luger's image on the back. I always loved those jackets. Extensive stalling to start, considering the limited amount of TV time. Savage finally attacks, throwing in some chokes and eye rakes. Luger reverses a whip and lays Savage out with a clothesline. Luger tries something from the apron, but Savage greets him with a fist to the midsection. Savage to the top rope for a double axe-handle. Whip to the ropes and Savage with an elbow for two. Luger blocks a suplex and counters with his own, but misses the jumping elbow that always misses. Savage goes to work on the arm as we take a break. We return, with Savage still working on the arm. PAYBACK! Unfortunately, the commentary is so atrocious it's barely trying to get the match over as the big grudge match it's being worked as. Savage slaps on an arm-lock, but Luger makes it to the ropes. Small package gets two, then it's back to the arm. Luger takes a weak bump to the floor and meets the post. Savage tries another axe-handle, but jumps right onto the security rail. Luger puts the boots to Savage, still selling the arm. Whip to the ropes and Luger with a clothesline for two. Luger with a trio of elbows for two. Luger with kicks to the midsection and a running knee lift. He drops three more elbows for two. Whip to the ropes, and a crisscross ends with a head collision. Savage recovers first and covers for two. They take it to the floor, with Luger getting thrown into the rail. Back in the ring, Savage sends Luger to the corner and lays him out with a clothesline for two. Luger gets rammed into an exposed turnbuckle, then takes out the referee on the way down. Savage drops the big elbow, but there's no referee to count. Here comes Ric Flair, KO'ing Savage with a foreign object. Hart rolls Luger on top of Savage, meanwhile, Hulk Hogan shows up to once again get the better of Flair. Hogan prevents the referee's count, signaling a Disqualification at 13:59. **1/2 The bullshit finish ruined what felt like a genuine Main Event, with plenty of time given to it, and overall solid work from both men. The commentary sucked, hampering some enjoyment, and that finish was pretty bad.

- Post-Match, Sting shows up and takes the proverbial bullet for Luger, taking a roundhouse right from Hogan, and he's mad. Sting and Hogan get into a shoving match, and now Savage tries to make peace. Next week, Sting and Hogan are scheduled to team up, and Hogan isn't sure where Sting's allegiance is. For the last time, he's on Hogan's side, but Luger's his best friend, and he's going to try and make things right. I should note the show ran about 10-minutes long, but Bischoff had all but promised this when the match began.

Final Thoughts: Good show overall, but a little disappointed with everything. For once, the Main Event is given plenty of time thanks to an over-run, and they give us one of the worst finishes yet. The commentary continues to bring the quality of the good matches down because the matches are mostly ignored. On the plus side, they did a solid job hyping the next week's Main Event. I actually enjoyed Luger/Savage because they've spent two months at each other's throat. Yes, they've had a match on Nitro and a PPV already, but this felt like it mattered more and was treated as such. Really tough to choose whether Raw or Nitro put on the better quality show, with both offering decent upper-card quality matches.