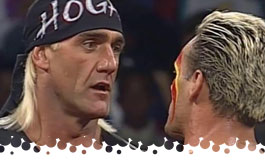 - Last week on Monday Nitro, Hulk Hogan issued a challenge to Sting, which was accepted and confirmed for tonight's Main Event. NJPW is starting to invade WCW, with Kensuki Sasaki doing a clean job to Chris Benoit. Dean Malenko punked out Sting until a fluke cradle ruined his night, and Randy Savage is going to need surgery on his left arm following a post-match beating at the hands of Lex Luger.

- Over on Monday Nitro, not much really happened. The 1-2-3 Kid had a decent match with Hakushi, and Diesel interrupted a heatless match between Savio Vega and Skip Bodydonna to tell the world he's not going to be a stupid, smiling, ass-kissing babyface. Oh, and then you had a Main Event between Shawn Michaels and Owen Hart that featured Shawn collapsing in the middle of the ring and EMT's working on him for the last 5-minutes of the broadcast with the commentary team in total silence. Nitro may have Sting vs. Hogan scheduled for tonight, but it's going to take a LOT to top that kind of finale.

- LIVE from Macon, GA, with Eric Bischoff, Bobby "The Brain" Heenan, and Steve "Mongo" McMichael on commentary. This is where the BIG BOYS PLAY!

The Shark vs. Scott Norton:

Ugh. It's the midcard feud that WCW kind of remembers is going on, but doesn't care enough to follow up with for more than one segment per month. Seriously, they had a spot on the second episode of Nitro, did a match about a month later that went to a crappy Double Count-Out, and now this. That's 2 and a half MONTHS. Shark attacks Norton during his entrance and four people boo. The match starts properly, with Shark grabbing a bearhug and taking Norton down with a belly-to-belly suplex. Whip to the corner and Shark follows in with an avalanche. Norton starts no-selling Shark's blows. Shark misses a second avalanche. Norton takes him over with a Powerslam for three at 1:44. 1/4* Same match as their previous encounter on Nitro, except Shark actually jobbed to the Powerslam.

Hey, that's not Ric Flair! I never understood promising a match with someone that you know won't be able to work due to an injury. Wouldn't Eddie vs. Pillman with Flair at ringside be just as successful in hooking the audience? Same goes for WWF or any other company, just to state for the record. Pillman sets the tone early by teasing Eddie with his jacket, not unlike a bull fighter. Lockup into the corner, Pillman with a cheap elbow and chops. Eddie comes back with a flying head scissors, a dropkick, and the bitch slap from El Paso. Eddie with a twisting back suplex, but a high risk manuever is countered with a dropkick. Pillman with raking of the eyes and biting. Whip to the ropes, Guerrero ducks a clothesline and rolls Pillman up for two. Whip is reversed, and Pillman takes him over with a back drop for two. Pillman with a suplex for another two count. Guerrero fights out of a chinlock, but gets taken over with a Powerslam. Pillman with some trash talking and a big old spit to the face, so Eddie tackles him and pounds away. Pillman lures him to the apron and takes him to the floor with a suplex. Pillman goes high risk, and comes crashing down on the security rail. Eddie to the top, and he launches himself into the entrance aisle onto Pillman! Back in the ring, they go through a seires of counters until Eddie plants him with a brain buster. Eddie takes too long going to the top rope and gets crotched along the turnbuckle. Pillman climbs up with him, but Eddie shoves him down and hits the Frog Splash for three at 6:27. Again, it's called a JACKNIFE. **1/2 Good match that was criminally short considering the talent involved. Imagine these two with 20-minutes? I'm thinking an easy 4-star effort with both men motivated.

Maybe it will be really short. Bobby Heenan mentions the return of the One Man Gang. Goodie. In a kind of shameful lie, Bischoff says that maybe at World War 3, someone will show up unexpectedly, just like when Lex Luger left the WWF on September 4th. Yes, he did mention the WWF by name. Hawk pounds away, takes Bubba over with a back drop, and lays him out with a clothesline. In a ridiculous moment, a foreign object comes flying out of Bubba's pocket, and then he casually picks it up and stuffs it back in his pants. Hawk misses a splash from the top rope as Mongo practically gives away the finish concerning the object. Bubba takes control with rights. Whip to the ropes and he grabs a bearhug. Hawk fights free, but walks right into a spinebuster. Whip to the corner, and a collision puts both men down. Hawk goes to the top, missing a clothesline. Bubba pulls out a "roll of quarters" and a roll of tape, but in one of the dumbest finishes I can think of, Jim Duggan magically shows up to trip him, resulting in Bubba landing on his own loaded, taped, fist, and Hawk covers for three at 3:49. -* It wasn't short enough and the finish was beyond stupid.

To further the bizarre storyline, Hogan continues working in his all black, long-tights attire, while Sting is rocking the red and yellow of Hulkamania. Hogan comes in from the crowd, but doesn't attack. WUSS! Sting unloads with kicks and rights. Hogan reverses a whip to the corner and follows in with a clothesline. Whip, Sting ducks under a clothesline and connects with a pair of dropkicks, sending Hogan over the top rope, to the floor. Hogan pulls him out under the bottom rope, rams him into the security rail, and takes him over with a suplex. Back in the ring, Hogan practically whiffs on a clothesline and rakes the back. Whip, and this time Sting comes back with a cross body press for a two count. They trade hammerlocks until Hogan takes him down with a drop toe hold and goes to work on the left arm with a cross armbreaker. No, that wasn't a typo. Sting fights back to his feet and takes his turn working on Hogan's arm. Hogan grabs a headlock and holds onto it for a while. Sting forces a break in the corner and kicks away at the left leg. Whip to the corner, but Hogan catches him in a bearhug to counter the Stinger Splash. Whip to the ropes and Hogan with a running elbow for two. Back suplex for another two count. Suplex gets two. Sting reverses a whip and clips the knee. He drops an elbow across the knee and slaps on the Scorpion Deathlock! Hogan muscles his way out of the hold and starts Hulking Up to a chorus of boos. He hits three rights and the big boot, but the leg drop misses! Sting applies the Scorpion Deathlock again, but this time the Dungeon of Doom (including new member Hugh Morrus) runs in to ruin the match at 9:33. Sting and Hogan easily fight off all the jobbers until the Giant makes his way to the ring. Savage saves them from a double chokeslam with a chair shot, but the Giant no-sells it and plants him with a Chokeslam. Sting and Hogan recover and clothesline the Giant with the chair, knocking him over the top rope, to the floor. **1/2 I was wavering a bit on this one. Do I go easier on the match because Hogan actually attempted to wrestle a different style than the boring formula he fell into since 1989, or judge more harshly because half the time he looked like he was doing stuff for the first time in his life? I honestly was going with the former, but the crappy finish knocked me to enough reality to land somewhere in the middle. It's a good match, and on PPV with 8-10 more minutes, could've been a classic Main Event, but here, it's just another ho-hum TV Main Event.

Final Thoughts: Unfortunately, the dream match of Sting vs. Hulk Hogan brought very little to the overall ratings, possibly due to having only been announced a week ago and featuring very little build to justify such a big deal. The match was good, but forgettable, and going head-to-head with Shawn Michaels' worked shoot meant the WWF probably ended the night being more talked about. Eddie Guerrero and Brian Pillman had a fine match, but the rest was the usual junk filler to get everyone rotated into Nitro appearances. It's a tough call this week, but give it to Monday Night Raw by the slimmest of margins.