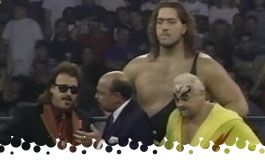 - Last week on Monday Nitro, a whole lot of nothing happened, we watched clips of the Halloween Havoc Main Event, and we are still in the dark when it comes to the World Championship situation. Honestly, NOTHING can be worse than last weeks episode, and with the promise of an INTERACTIVE NITRO (I honestly almost typed "Raw"), where the fans choose a match with one option from the red room (cough:Flair:cough) and one from the blue room (cough:Sting:cough).

- Over on Monday Night Raw, Jerry Lawler and Isaac Yankem DDS scored a Disqualification victory over Bret Hart and Hakushi when Barry Horowitz interfered (none of that sentence is a typo, it's a match that happened with an actual run-in). The British Bulldog scored a clean victory over burn-out Marty Jannetty, and there were a couple of squash matches featuring Henry Godwinn (over who I believe was a young Rhyno) and Kama (over some guy that definitely wasn't Rhyno). This sounds... eh.

- Live from Jacksonville, FL, with Eric Bischoff, Bobby "The Brain" Heenan, and Steve "Mongo" McMichael on commentary unless otherwise noted. Nitro is INTERACTIVE! Call 1-900-370-3WCW to pick the Main Event in tonight's show!

Cobra's AWFUL Morse-code theme music is driving me insane. Seriously, what's with WCW having some of the most annoying theme music possible?! What a great follow-up to the Giant's challenge to end last week's episode of Nitro. The Giant still has the WCW World Heavyweight Championship that he stole at Halloween Havoc. the Giant quickly grabs Cobra and plants him with the Chokeslam, and it's all over at the 18-second mark. No, I'm not going to give that a star rating for obvious reasons.

- "Mean" Gene Okerlund is in the "red" locker room (with a black background), with Ric Flair, Diamond Dallas Page, Big Bubba Rogers, The Shark, Scott Norton, and the Blue Bloods sipping tea. The Shark and Norton need to be seperated. Over in the BLUE Room, with an actual blue background, we've got Sting, Jim Duggan, Johnny B. Badd, the Nasty Boys, Alex Wright, DAVE Sullivan, and J.L. Seriously, does anyone see anything other than Flair vs. Sting as the logical choice from "fans"?

- Hulk Hogan and "Macho Man" Randy Savage, decked out in black and white (cough:nWo:cough), cut a promo from "Venice Beach, CA", and Hogan actually calls the Giant "stinky" and "wart infested." At least he finally found a new insult other than "stinky". They're sitting around some drunk hobo, or at least that's the perception I'm getting from his nonsensical screaming.

The Renegade vs. The Taskmaster (w/ Jimmy Hart):

This is our first appearance of Renegade on Nitro, long after his push died, for obvious reasons. He hits the ring and quickly levels the Taskmaster with clotheslines. He sends him over the top rope, but doesn't draw a Disqualification. Jimmy Hart with a distraction, allowing the Taskmaster to attack and crotch him along the security rail. Hart with trash talking about the Renegade being the next Hulk Hogan, but he wouldn't listen to him. You want to know how small the Renegade is? He's barely taller than the midget Kevin Sullivan. Sullivan goes for a somersault, but kind of meets knees. Renegade with a Powerslam, followed by the Muta Elbow. He traps himself in a Tree of Woe, and Sullivan charges in with a knee to the midsection. Double Stomp from the second rope and it's good for the three count at 2:45. Post-Match, Jimmy Hart throws water in Renegade's face, wipes off his makeup, and screams "you're not the Renegade, you're just plain, old, Rick." 1/4* Another nothing match, but it continues to establish the Dungeon of Doom's dominance.

- Meanwhile, The Shark and Scott Norton still have issues. Main Event in any arena in Japan. Ric Flair hogs the microphone, cutting a promo on Sting. Definitely not an obvious hook for the marks.

We're seeing a lot of Eddie vs. Benoit on Nitro, this being their third meeting in some way (2 singles, 1 tag team) in less than a month. Not that I'm complaining. Benoit attacks before the bell, plows through Eddie with a vicious charging forearm, and takes him over with a snap suplex. Benoit with chops and a high-angle back suplex. Whip to the ropes, Benoit with a spinebuster, and he slaps on the Liontamer in the center of the ring. We see a table of "Japanese contingent", including Jushin "Thunder" Liger, among others. Guerrero counters a slam with a series of arm drags and catches Benoit off the ropes with a tilt-o-whirl slam. Whip to the ropes and Eddie sends Benoit to the floor with an elbow. He hits the ropes, but Benoit walks away, only for Eddie to follow him to the aisle with a long-distance body press from the top rope! Back in the ring, Eddie with a Brain Buster. He heads to the top rope, but Benoit follows and takes him down with a Super-Plex for a two count. Benoit with a brutal Powerbomb for another two count. Eddie tries for a sneaky victory roll, but Benoit kicks out at two. Whip to the ropes, Benoit goes for a knee lift, but Eddie counters with a roll up for two. Benoit with a German Suplex for two. He holds on to the waistlock and takes Eddie over with a Northern Lights Suplex for another two count. Eddie blocks the Full Nelson Suplex, a nod to their first match on Nitro. Benoit changes course and hangs Eddie across the top rope with a front suplex. Eddie blocks a follow-up and they slug it out. Benoit picks him up for a back suplex, but Eddie shifts his weight, landing on top for the three count at 6:28, with Benoit accidentally having his feet hooked under the bottom rope the whole time. ***1/2 Just as good as their first match, borrowing a few key spots from there, but feeling like a fresh match overall that also gave us a nod to Eddie learning to block the spot that spelled his demise in their first encounter.

- Surprise, surprise, Sting and Ric Flair won the Interactive Vote and will face off in tonight's Main Event... NEXT!

***. Whoops, sorry, I got ahead of myself. With the television time remaining, this has to hit at least 3-stars. Sting is still sporting Halloween colors from Halloween Havoc, for those of you who care about that kind of thing. Sting attacks before the bell and mounts Flair with a flurry of rights. Whip to the ropes, Sting with a press slam, followed by mounted punches in the corner. He sends Flair to the corner, flipping him to the apron, and knocking him off with a clothesline. Sting follows him to the floor, sending him into the rail and no-selling his chops. Flair with a cheap shot and suplex on the floor, but Sting pops up like nothing happened, only to miss a Stinger Splash and dropping himself across the security rail.

We return from commercial break, with Flair working over Sting in the corner. He takes Sting down with a back suplex and slaps on the Figure-Four. He uses the ropes for extra leverage until Sting starts to feel the adrenaline, pulls Flair away from the ropes, and turns over the pressure. Flair comes off the ropes with a kick to the knee, but Sting stands tall. Chops? Nothing. Sting begs for me, backing Flair up. Whip to the ropes, and Sting with another press slam. He sends Flair across the ring with a hip toss, followed by a dropkick. Flair thumbs the eyes to slow him down and tosses him to the floor. Flair comes off the apron with a double axehandle and unloads with a pair of brutual chops. Flair grabs a chair, but the referee pulls it away. Back in the ring, Flair levels Sting with a right and tries to use the ropes to score a pinfall, unsuccessfully. Flair with a headlock takeover, countered with a head scissors. Flair floats over for a bridge spot, and Sting takes him over with a back slide for two. Flair goes to the eyes again and climbs the ropes, only to get slammed off. Sting backs him into the corner and unloads with rights and chops. The referee gets in the way, so Sting carries him away. Meanwhile, Flair whips out a "foreign" object and KO's Sting with it. He takes his sweet time before dropping an elbow, but it only gets two! Whip to the ropes, and a chop doesn't phase the Stinger. He no-sells everything Flair has to throw at him, and again takes Flair over with a slam. He sets Flair across the top turnbuckle and takes him down with a Super-Plex! He slaps on the Scorpion Deathlock, and Flair submits at 9:16! Sting keeps the hold applied, so a handful of referee's come out. It takes the entire Blue Room to get him to release it, but he charges back in to reapply the hold. Finally, Lex Luger shows up to talk Sting into letting the hold go. ZUH?! ***1/2 You could probably call a Sting/Flair match move-for-move in your sleep, but it's still a guaranteed pretty good/great match if they have the time and motivation. I should note that Luger missed his cue, mentioned by Eric Bischoff, but Heenan mentioned "security holding him back" to explain the long delay.

- "Mean" Gene Okerlund is in the ring with Jimmy Hart, The Taskmaster, and The Giant for a Main Event Interview. Jimmy Hart reveals he put a stipulation into the contract for Halloween Havoc that stipulated that the Giant would become WCW World Heavyweight Champion in the event the match ended with a Disqualification. NOT SO FAST... Okerlund brings out a WCW attorney to give the final judgment on the whole situation: The Giant is NOT the World Champion, and because of how the Disqualification took place, the Championship will be held up and awarded to the winner of the 3-ring, 60-man Battle Royale at World War 3. SWERVE!

- Next week on Monday Nitro: "Macho Man" Randy Savage takes on Meng, Eddie Guerrero challenges Johnny B. Badd for the Television Title, and Sting faces Dean Malenko. That sounds like a promising lineup.

Final Thoughts: Two outstanding matches, from the perspective of free television, makes this another must-see episode of Nitro. Yeah, we've seen Sting vs. Flair so much it's a little hard to entice people to search it out, but it's always a good performance. Benoit vs. Guerrero was pretty good, but unfortunately was largely ignored by the commentary. The rest was so short, I don't even have to consider evaluating it for my overall judgment for the week. Thumbs Way up, Raw loses.