- Last week on Monday Nitro, Sting finally was convinced by Ric Flair that his heart was pure, and helped him take on Double A and Flyin' Brian in a hot Main Event. In the undercard, Chris Benoit and Eddy Guerrero tore the house shown with a near 4-star performance that was actually put over by the usually ignorant and snide commentary. The Dark Side of Hulkamania continues to build towards the big showdown with a Big, Nasty, Stinky, Giant.

- Over on Monday Night Raw, it's the night after what is possibly the worst WWF PPV of all-time (the 4th In Your House, held in Winnipeg, Manitoba). Owen Hart won a 20-man Battle Royale, last eliminating Marty Jannetty, to earn a shot at the Intercontinental Title (side comment: it also featured the final TV appearance of King Kong Bundy). Alundra Blayze regained the Women's Championship from Bertha Faye in an OK match, and finally, Al Snow made his WWF debut as "Avatar", a masked man who came and left the ring without his mask on. He worked a squash match that was so hideously bad the character was killed off almost instantly. (According to the WON, on top of nerves and his opponent looking lost the entire match, the ropes were incredibly worthless thanks to 20 oiled up men soaking up the ropes in the previously featured Battle Royale)

- LIVE from Huntsville, AL. Eric Bischoff, Bobby "The Brain" Heenan, and Steve "Mongo" McMichael are on hand to call all the action, unless otherwise noted.

Savage is set to face Kamala at Halloween Havoc, and if he wins his match, and Lex Luger wins his, then he gets a rematch with Luger from a few weeks ago. Savage slaps Parker's cigar out of his mouth, so Kurasawa attacks with kicks, kicks, and more kicks. He throws in a few chops to change it up. Savage uses the tights to launch him to the floor. Kurasawa hops back in and continues the punishment. Kurasawa catches Savage over his shoulders and drops him with a slam for a near fall. Kurasawa starts working the arm, which may or may not be legitimately injured (spoiler: it is, but then they had Hulk Hogan go out on a live PPV and claim the injury as a fake, but that's WCW for you). We take a commercial break, and return with, you guessed it, Savage taking a beating. If I hear Bischoff say "back leg round-kick" again, I'm going to flip the channel to the USA Network. Kurasawa goes for a baseball slide, but Savage, using his Single-A Minor League Baseball Skills, avoids the colission. Kurasawa goes for ANOTHER kick, but it meets the post. Back in the ring, Savage clotheslines Kurasawa across the back of the head, and finishes with the Flying Elbow Drop at 5:48 (but not before Kurasawa awkwardly and obviously tries to get in proper position). DUD Typical formula Savage match: take a beating, make a quick comeback and finish with the Elbow. McMichael, in one of the few moments of not being stupid, suggest a cortizone shot for Savage's elbow if he's going to compete at Halloween Havoc later in the week.

- The lights go out, and it only means one thing: Dungeon of Doom nonsense! We get a pre-taped promo from the old wrinkled sack that the Taskmaster calls "Father" (or "Fadda!" in his New England accent). He hypes finding and somehow digging out a 13-ton block of ice (13 TONS, 26 thousand pounds) that contains their insurance policy: THE YETI. Whatever. Whoever, or whatever, is in there, will be revealed at Halloween Havoc. I guess this is WCW's answer to the Giant Egg at Survivor Series '90 for "lame promise of a big reveal." 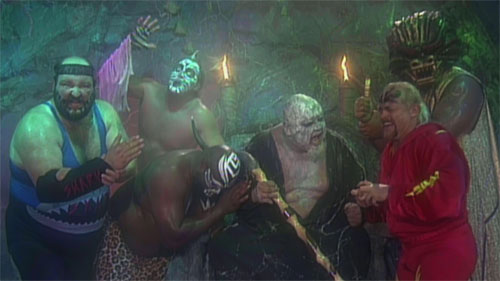 - "Mean" Gene Okerlund brings out WCW World Champion Goth Hogan for his final words concerning Halloween Havoc. Somehow, I have this weird feeling that the "Yeti" is an idea of Hogan's for a monster heel of freakish size and non-existant wrestling ability. He immediately no-sells his neck injuries by ripping off his neck brace and cutting a nonsensical promo about riding a Motorcycle and telling Sting, Savage, and Luger to get in line to do the job.

- This Saturday Night at 6:05 on TBS, the Tag Team Titles are on the line between the American Males and Harlem Heat, Lex Luger takes on The Shark, and WCW World Champion Hulk Hogan will be on hand, as well.

This was supposed to be Eddie and Alex Wright teaming, but Wright is limping out with a brace around his left leg and on crutches, so the Mysterious Mr. J.L. is subbing for him. Benoit and Guerrero start. Benoit grabs the arm, but Eddie sweeps the leg. Malenko gets the blind tag, and a series of moves leads to Benoit accidentally hitting his partner with a suicide dive. Eddie launches J.L. over the top with a plancha to add injury to insult. Back in the ring, Eddie with a fancy arm drag on Malenko. Criss-cross, and Malenko comes back with a jumping heel kick. Eddie catches him off the ropes with a tilt-o-whirl back breaker. Malenko takes J.L. down with a back suplex, and we cut to the locker room with Scott Norton and The Shark trading blows... OK? I guess Norton is still mad about September 11th... the match on Nitro, not the terrorist attacks that have yet to happen. Back to the match, and J.L. is your Cruiserweight In Peril. Malenko slaps on an abdominal stretch as we take a break.

We return with Malenko taking him over with a belly-to-belly suplex for two. Benoit with a brutal back suplex for two. J.L. counters a powerbomb, but a dropkick is easily swiped off. Malenko with a leg drop for two. Benoit drops him across the top rope with a front suplex, then takes him off the top with a Super-Plex. J.L. finally comes back and gets the hot tag to Guerrero. He greets Malenko with a dropkick, then knocks Benoit off the apron with another. Eddie walks the ropes and takes both men down with a arm drag/head scissors combo. Somewhere in there, J.L. tagged back in, Wright trips Malenko up, and J.L. takes him over with a victory roll for three at 9:11! Seriously? J.L. gets squashed all match and gets a fluke win? **1/4 Surprisingly disappointing. The wrestling was OK, but felt more like an extended squash once J.L. tagged in. The match also seemed to serve as a back-drop to the Shark/Norton pull-apart and hyping Hogan/Giant.

- Post-Match, Flyin' Brian shows up out of nowhere to attack Guerrero and plants him with a DDT on the concrete.

During the introductions, Bischoff and McMichael take a few shots at the previous night's In Your House with such comments like "In Your Outhouse" and suggesting the smell of poop. To be fair, it was an AWFUL show. Probably in the Top 5 of Worst WWF PPV's Ever, and only second to KOTR '95 for "at the time" lists. Sting is sporting red and yellow and has grown out some facial hair... is he representing Hulkamania for the little Stingers?! Sting and Booker T start. Booker with a headlock and shoulder tackle. Criss-cross, Sting with a dropkick, followed by a hip toss, sending Booker over the top, to the floor. Back in, Luger comes off the second rope with a double axehandle.

We return from commercial break, with Stevie in control of Luger with a nerve hold. Luger tries to fight free, but Stevie pounds away and Booker comes off the ropes with a dropkick. Luger with rights until Stevie thumbs the eyes. Sting tries protesting the cheating, but the referee turns a blind eye. Booker T with a scissors kick, but no Spin-a-Rooni. We see Sherri admiring a picture of Col. Parker while Luger pretends to sell this horrific beating at the hands of Harlem Heat. Eric Bischoff continues to horribly mispronounce "Yeti", adding an "ay" to the end instead of "e". Booker misses a somersault leg drop, opening the door for a hot tag. Sting pounds away on both men with rights and chops. Stinger Splash to Stevie! Stinger Splash to Booker! Elbow drop on Stevie, but Booker interrupts a Scorpion Deathlock. Harlem Heat with a double suplex on Luger. Sting surprises Booker with a clothesline from the top rope, and it's good for three at 6:38. * Mostly rest-holds and the finish seemed rushed and uninteresting. I expected a lot better, even with Luger and Stevie Ray being sub-par workers.

- Post-Match, The Giant shows up and Chokeslams Luger and Sting. Savage runs out to get him some, as does Hulk Hogan! Giant no-sells a few roundhouse rights and clubs him across the back of the neck. Hogan immediately starts Hulking Up and throws some more rights, staggering the big man. He sends him to the buckle, and suddenly the Dungeon of Doom runs interference to make sure that the Giant doesn't lose too much face. I'm fine with Earthquake, Brutus Beefcake, Haku, and Kevin Sullivan getting whooped by one guy. Since this segment was actually not bad, the ice chunk explodes and we see... something for half-a-second before we cut away. Was that a friggin' Mummy?!

Final Thoughts: The road to Halloween Havoc ends here, and the Giant and Hulk Hogan's showdown is still the only match worth hyping. Now they've thrown in some nonsensical bullshit about a "Yeti"... whoops, sorry, Ye-TAY, and you just have to slap your forehead and go "what are they thinking?". As far as the wrestling, I was surprisingly disappointed. The Main Event wasn't going to be great, but it felt very lackluster, and then the tag match between Benoit/Malenko and Eddie/J.L. was a real let down, worked mostly as a squash before an awful fluke finish that doesn't help anyone. No better than what Raw presented this week.