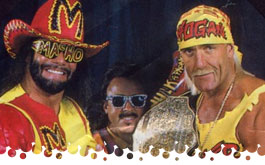 - From Las Vegas, NV and Caesar's Palace on January 25th, 1995, with Tony Schiavone, Bobby Heenan, and "Mean" Gene Okerlund welcoming us to the historic 30th edition of Clash of the Champions. I guess Heenan's thankful that he doesn't have to wear a toga and ride a camel this time he's at Caesar's Palace.

This was apparently arranged through an interactive fan poll... so the WWE App is ripping off a WCW concept from two decades ago!?! Anderson had recently won the belt from Johnny B. Badd. Lockup and a clean break. They trade blows, with Badd gaining the upper hand. Arn makes an unwise trip to the top rope, only to be dropkick'ed to the floor. Badd follows with a plancha onto Badd and Parker. Back inside, a double axehandle gets two, and Badd starts going to work on the arm. Badd surprises Double A with an enziguri for another two count. Arn tries it himself, only to kiss canvas. Arn hangs Badd up across the top rope and tosses him to the floor. Schiavone mentions this is a 15-minute Time Limit... let me guess the finish. Back inside, Arn quickly grabs a chinlock. Badd tries to get a boot up on Arn, but he lands on his feet and counters with an elbow drop. Badd comes back with a pair of clotheslines and a head scissors. He lands a roundhouse right, knocking Anderson to the floor. We get a game of cat-and-mouse between Parker and Badd, leading to Badd eating a DDT courtesy of Double A, and it's enough to retain at 7:39. **1/2 Some decent action, but this was too short to pick up and really deliver anything worth watching. These two seemed to get the shaft whenever it came to time. I recall them doing a match at the SuperBrawl V edition of "Main Event" that went less than 5-minutes, and then the goofy match at Uncensored.

- Gene interviews the Butcher and Kevin Sullivan. You reform The Mega Powers (without calling them that) and not only waste it on free television (as free as cable is), but against THESE TWO?! Wow, talk about stupid booking. I bet Hogan was behind it.

- Call the Hulk Hogan Hotline! With eight options to choose from, including "Beat the Hulk"... yeah, I'm pretty sure Hogan doesn't do clean jobs in imaginary phone matches, either.

- Das Wunderkind Alex Wright music video. UGH! From what I remember, Alex Wright was a pretty decent wrestler, and showed some athletic ability. He could've gotten over without this cornball stuff.

I don't like the odds of Beautiful Bobby, especially when we're told that Alex Wright is still undefeated. When people talk about Bobby Eaton as a great high flyer, it's hard to take seriously with his unimpressive physique, but damn was he a good worker. Wright with a takedown and goes to work on the left arm. Wright with a shoulder tackle, slam, and diving headbutt, then back to working the arm. Wright with a nifty back flip and flying head scissors. Whip to the ropes, Eaton ducks a body press, resulting in Wright hanging himself across the top rope. Eaton with choking and a chinlock. Wright with elbows to escape, followed by a snap suplex. Wright with a weird looking jumping heel kick. He goes to the top rope and connects with a missile dropkick for a two count. Twisting body press for another two count. Eaton with a swinging neck breaker. He goes to the top rope and connects with the Alabama Jam, but Wright kicks out at 2.99998. Wright avoids a charge and hits another twisting body press, and this time it's enough for three at 7:30. ** A hot finish picked up what was essentially an extended squash match for Alex Wright. I'm pretty sure Eaton was repackaged as "Earl Robert Eaton" not long afterwards.

- Big Van Vader, the #1 Contender and reigning United States Champion, has bought a front row ticket, because that's not obviously a set up for a run in later in the show. Oh, and Ric Flair, along with two random pieces of ass, is also in the house. Did I mention he was forced into retirement at the previous Halloween Havoc? That retirement didn't last long.

(Stevie Ray & Booker T vs. Marcus Alexander Bagwell & The Patriot)
I'm pretty sure Harlem Heat won the belts a few weeks earlier from Stars & Stripes. The first of what I think ended up being 10 reigns. Most of them BEFORE the Vince Russo era! Bagwell and Booker T start. Booker with a slap, and Bagwell responds with rights and stomps. Bagwell ducks a jumping heel kick and sends Booker to the floor with a dropkick. Patriot comes in and quickly goes to work on the arm. Stevie Ray tags in and starts putting the boots to him. Whip, clothesline misses, and Patriot comes back with a diving forearm. Bagwell comes in and gets planted with a front powerslam. Stevie misses an elbow and Bagwell goes back to the arm. Booker T tags back in and it's more of the same. Bagwell ends up playing the face-in-peril. After a couple of spots, we slow down again with a chinlock. Bagwell fights free, and a double body press puts both himself and Booker T down. Patriot gets a "hot" tag and everyone brawls. Sherri hops on the apron, shoe in hand, and Booker gets sent into her. Bagwell with a roll up, Stevie Ray hits him with a side kick, and Booker counters for the three count at 9:21. *1/2 This never seemed to get out of second gear. Harlem Heat never really had control of the match, and there was little build to a hot tag that was constantly screamed about not being legal, even though it appeared to be the other way around. Best bump of the match is Sherri getting knocked on her ass from the apron.

- I guess the non-trademarked, non-WWF name for Team Hogan and Savage is THE MONSTER Maniacs. Ugh.

- "Mean" Gene Okerlund is in the WCW Control Center to hype WCW SuperBrawl V on Sunday, February 19th from the Baltimore Arena in Baltimore, MD. Hulk Hogan defends the WCW Championship against United States Champion Vader, but only Hogan's title is on the line. Then he pimps the WCW Hotline. I guess if I were getting a cut of the money, I'd shill the crap out of it, too.

Special Referee: The Guardian Angel. Formerly The Boss (man, is he big), who is here to enforce law and order. I don't know why, either. Guardian Angel spent the latter half of 1994 jobbing to Vader at every PPV and Clash of the Champions, so it's not like he has much momentum as a babyface. Avalanche has obvious knock-off music of his Earthquake theme. He's also from MOUNT EVEREST, WA. He gets almost ZERO reaction. Then we hear "Man Called Sting", because of all the music in the world to pay for, it's THAT song. Did You Know... Sting appeared at the 1st Clash of the Champions back in 1988. Avalanche attacks before the bell with clubberin' blows. Sting with a pair of dropkicks, knocking him over the top rope, to the floor. Back inside, Sting goes for a slam, but Avalanche is too fat. Avalanche with elbow drops, leg drop, and Powerslam for two. Sting somehow drops him with a shoulder tackle and falls head first across the groin. Sting with not one, not two, but THREE Stinger splashes! Make it a fourth, and this time a slam attempt succeeds! Sting with the Scorpion Deathlock! Avalanche keeps saying yes, but the Guardian Angel won't call for the bell. Nick Patrick runs in to signal for the bell, giving the win to Sting at 5:19. Guardian Angel takes exception to this and puts a post-match beating on Sting. That seemed sudden. * Sting might as well have been wrestling the Invisible Man, "Avalanche" was that helpful towards making it a good match.

- Post-Match, "The Guardian Angel" denounces himself and declares he's "Big Bubba Rogers." If you say so. Gene Okerlund scolds Big Bubba Rogers for using "ass" on Cable Television past 9 o'clock. Now you can say every word in the book after 8 o'clock on basic television.

Oh man, it's THIS match. You'll see what I mean later. I'm not entirely sure, but this could be Savage's in-ring debut with WCW. "The Butcher" is Ed Leslie, formerly Brutus Beefcake in WWE. I guess him headlining a PPV that bombed wasn't enough to immediately push him down the card. The "Monster" Maniacs come out to "American Made", because Hogan will never let Savage look like an equal to him. Hogan and Butcher start. I guess you can say it's all uphill from here. Hogan outsmarts him (as if that's hard to do) and pounds away with rights. Savage tags in and comes off the top with the double axehandle. Savage cleans house of both "Faces of Fear", making them look like total Jobbers. Hogan hits a running high knee for two. We're in Las Vegas, not Japan. Stop trying to bust out the moveset (Spoiler alert: It's typical WCW Hogan from this point forward, so... good job Hulk?). Butcher grabs a Sleeper, seemingly out of nowhere.

Butcher and Sullivan celebrate as Savage tries to revive Hogan... and then it happens: Savage climbs the ropes and comes crashing down with the elbow smash! AND IT'S HULK UP TIME. Yes, Randy Savage revived Hulk Hogan with an elbow drop, because I guess we as fans watching should know "Hogan ALWAYS revives after taking a signature move, especially when it comes from Randy Savage". They clean house again, working Butcher over relentlessly until Savage gets to play face-in-peril following a man sized bump over the top rope. Is Hogan going to expose the business by letting Savage revive from his leg drop? HA! EVEN BOBBY HEENAN MOCKS THE LACK OF INTELLIGENCE BEHIND THE "REVIVE" BIT. Sullivan finally works an extended period, doing little worth noting. I'm still in shock over that Elbow drop routine. REALLY?! Sorry... I'm just... wow. This isn't a goofy house show spot no one but the few thousand in attendance will see: THIS IS A PRIMETIME SPECIAL ON CABLE TELEVISION HYPING THE FIRST TIME HULK AND SAVAGE ARE A TEAM IN YEARS! AND YOU DO THAT?!?! Hogan gets the hot tag (of course), cleans house of everything walking with an ugly mullet, hits Butcher with the big foot, Savage drops the elbow, and the leg drop finishes at 12:07. * Savage took a good beating and I guess the crowd was into it, but the rest was junk. Did I mention how stupid and retarded the reviving elbow spot was?

Final Thoughts: 1995 wasn't a very strong year for the WWF and WCW, and when it comes to WCW, it's clear what some of their problems were: The undercard is fine, but forgettable, thanks to lame characters like Alex Wright that turn off the crowd because his goofy dancing overshadows his quality ring work. Arn Anderson is constantly being protected by a repackaged Haku. Random teams like Marcus Bagwell and the Patriot playing "dress alike" and having zero team chemistry. Earthquake being pushed as the same old "monster" heel that fizzled out by the end of 1990. The Guardian Angel repackaged AGAIN, this time as Big Bubba, the gimmick that WWE (or others) can't (or won't) sue over. Ed Leslie in a Main Event. KEVIN SULLIVAN IN 1995 IN A MAIN EVENT. The reviving elbow drop. Hogan no-selling the big monster's finisher weeks before their first meeting on PPV. This was just... not good. Still more entertaining than most episodes of Monday Night Raw, though.