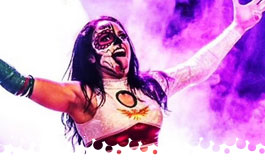 "Live" on Bleacher Report Live. Our hosts are Excalibur and Taz.

Sakura's team refuse to shake hands and then ambush from behind. Shida squares off against Itoh, who gleefully pummels her into the corner. Shida palm thrusts Itoh away. Itoh channels her dark side, and nails a tight head butt. Shida answers with a step up kick to the jaw. Rin tags in and strings together some offense on Sakura. Rin's crucifix is blocked and she eats Sakura's backbreaker. Veny tags in to pick up the scraps, but Saruga trips from ringside. Veny rolls through Rin's shotgun dropkick, smirks and slaps hard, but Rin recovers with a Northern Lights Suplex. Saruga enters with a springboard double stomp to Veny's back. Saruga applies Cattle Mutilation, Veny reverses a rollup into a sitout facebuster. Springboard moonsault by Veny gets 2. Sakura rolls Sagura around in circles while applying a surfboard stretch, while Itoh sings in the middle. The heels are enjoying themselves way too much as they pick Saruga apart. Shida gets a hot tag and shows great fire, piling her opponents for a triple buckle bomb. Sakura cuts Shida off with a tilt-a-whirl backbreaker. Sakura and Shida simultaneously hit backbreakers on interfering opponents. Sakura hits Shida with a spinning neckbreaker and running body press. Jumping knee strike by Shida, but Itoh sneaks in for a swinging DDT, and the match breaks down. Sakura puts Shida and Saruga into a clever double stretch muffler and gets them both with a body press. Veny moonsaults onto Shida and maneuvers into a rolling kick. Veny's moonsault on Shida is broken at the last moment. Veny blocks a Falcon Arrow and hits a German. Itoh head butts Shida to set up Veny's Sitout Powerbomb for only 2! Rin hits Veny with a super rana, allowing Shida to hit a dead lift German over the buckles. Vertical suplex by Shida gets 2 on Veny, and Sakura saves after a KO kick. The heels are whipped together, and Shida hits the Falcon Arrow on Veny for another 2. One last KO kick by Shida finishes Veny at 18:18. Very good exhibition match and compelling business statement by the participants, ***¾.
Winners: Hikaru Shida, Mei Sagura, and Rin Kadokura

Shida and friends foil the heels' post-match attack. Shida is all smiles.

Mizunami crushes Sakazaki with a hard handshake and backs her into the buckles. They trade wrist locks and Muzumani elbows the shoulder for an advantage. Sakazaki flips into an armlock takedown. Mizunami monstrously no-sells Sakazaki's dropkicks. Sakazaki pokes the eyes and sprints through rapid pinning combinations. Sakazaki hits a baseball slide dropkick and waits patiently for Mizunami to return to dropkick her knee out from under. Mizunami recovers and goes to work on Sakazaki's bad back and shoulders. Sakazaki rallies with a rana and diving elbow. She cartwheels off the turnbuckle to dodge a charge, but Ryo still hits a power slam. Wheelbarrow suplex by Mizunami and guillotine leg drop. Mizunami applies a triangle choke, but Sakazaki reverses into a triangle sleeper. Mizunami escapes with a dead lift powerbomb! Mizunami builds more steam with an overhead belly to belly throw. Sakazaki returns fire and hits a sliding lariat for 2. Magical Girl Splash only gets 2! Magical Girl 450 is no good, and Mizunami suplexes her for a breather. Sakazaki repeatedly rolls through Mizunami's power offense, but a spear and short-arm lariat nearly finish her. Mizunami's inside hook powerbomb finishes at 14:50! Great battle and a surprising outcome, ***¾.
Winner: Ryo Mizunami

They shake hands and lock up for some engaging chain wrestling. Riho runs the ropes and hits a pair of armdags and bridges up for a dropkick. Rosa answers with rolling vertical suplexes and hangs Riho on the ropes for a running boot to the head. Rosa elbows the head and picks apart Riho's neck. Riho comes back with a spinning head scissors takedown and lands a hard kick for 2. DDT by Riho, but Rosa answers with a neckbreaker for 2. Rosa applies a vicious full nelson, followed by a dragon sleeper. Riho rolls into a double stomp to the chest and gets 2 on a diving crossbody. Clothesline into the corner by Rosa and slingshot knees to the chest. Shotgun dropkick by Rosa only gets 2. Desperation dragon suplex by Riho! Rosa's superplex is reversed into a diving footstomp into a tree of woe! They both become frustrated by the nearfalls and Rosa steals it with a cradle at 11:32. Really good back and forth match, but the kick-outs at 2 started to wear on me, ***¼.
Winner: Thunder Rosa

And we're back to Youtube and Daily's Place for the U.S. bracket finals. Excalibur and Taz are still on the call.

Madi throws a book at Bates, which earns her a kick to the face. Bates hits a crossbody off the apron. Vertical suplex by Bates and a Northern Lights suplex for 2. Madi snaps the neck on the ropes to gain an opening. Bates answers with a series of stiff shots and kicks. Bulldog by Leva gets 2. Facebuster by Madi also gets 2. Madi rips some pages out of another book (The Young Bucks' autobiography) which fires Leva up. Madi clocks Leva with the book and wins at 4:10. Just a match, not particularly well executed. Madi's heel turn feels off, *½.
Winner: Madi Wrenkowski

Hirsch hits a quick shoulder block and leap frogs into position for an armdrag, but Alize returns the favor. Alize hits a rana to force a timeout. Alize hits a knee lift on the apron and takes control with corner attacks. Hirsch explodes into a shotgun dropkick. Brainbuster by Hirsch gets 2. Alize hits a ripcord knee strike and springboard corkscrew elbow drop for only 1. Hirsch reverses a neckbreaker into an armbreaker for an instant submission at 3:28. Cool squash for Hirsch.
Winner: Leyla Hirsch

They cautiously feel each other out early. Rosa springboards into Nyla's arms, but blocks a slam, only to get back into the buckles. Rosa escapes with her kickboxing skills and applies an ankle lock. Rose kicks free, but appears injured by the hold. Rose blocks a drop toe hold but misses an elbow drop. Rosa elbow drops the bad ankle. Rose manages to smash Rosa around the ringside area despite her ankle injury. Rose hits a pair of splashes for 2. Rose misses a spear into the buckles and Rosa capitalizes with a crossbody off the apron. Rose answers with a back suplex for 2, so stretches Rosa in a backbreaker position. Chokeslam by Nyla gets 2. Nyla climbs the ropes but Rosa trips her into taking a bad fall. Low clothesline by Rosa and slingshot knees to the chest. Shotgun dropkick by Rosa and a missile dropkick for only 2. Rosa's bad back won't allow a vertical suplex, so Rose hangs her on the ropes for the diving knee drop. Rosa kicks out! Desperation DVD by Rosa only gets 2! Rosa counters with a stunner and back drop suplex for yet another nearfall. Rosa flies into Nyla's Beast Bomb and pinfall at 13:42! Love that finish! Really enjoyed this, Rose makes a compelling de facto babyface, ***½.
Winner: Nyla Rose

Final Thoughts: What a privilege it is to be able to watch in-ring competitors of this caliber have competitive matches commercial free, all for free on the internet. This tournament has been a pleasure to watch, and I keep finding myself disappointed by the eliminations (which means I'm invested, that's a good thing).