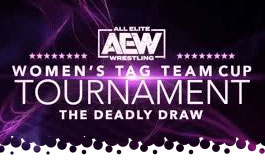 From Jacksonville, Florida. Our hosts are Veda Scott and Tony Shiavone.

Brandi is sporting a pair of her AEW action figure, providing a cheap plug, and showcasing some fun arrogance. She makes "little Brandi" do a tope suicida onto Marshall, and I'll be damned if it made me chuckle. Savoy takes advantage of Brandi's antics to almost steal the match with quick pin attempts. Allie tries to settle things down with a wristlock, but Savoy reverses and tags in Big Swole for some dancing kicks. Savoy's exploder suplex forces Allie to take a timeout, and Savoy inadvertently hits Marshall with a dive. Brandi is concerned about her action figure's safety and helps Allie take control of Savoy. Double underhook suplex by Savoy allows the hot tag and Big Swole plows through Allie with running lariats. Brandi is distracted by her toy at ringside while Allie takes a beating. Think it might be time for Brandi to see her shrink again. The Swoles look ready to finish when Britt Baker distracts on a speakerphone from her ride, and Allie drops the dime on Savoy to win at 8:15. The wrestling itself was fine, but Brandi's antics shifted from entertaining to downright farcical, and distraction finishes in AEW make my heart hurt, *¾.
Winners: The Nightmare Sisters

Swole storms around looking for payback, but Marshall helps Allie and Brandi escape to safety. Little Brandi made it out too, in case you were worried.

Conti and Ivelisse exchange kicks and Conti applies an armbreaker in the ropes. Jay tags and hits Diamante with a shoulder tackle. Roundhouse kick by Jay and a spin kick into the corner. Jay's running dropkick gets 2. Ivelisse and Diamante swarm Jay with rapid strikes in their corner to take control. Jay gets pummeled for a good while before making the hot tag to Conti, who spins Diamante into a side slam. Ivelisse makes the save, prompting Jay to storm in for stereo cutters. Ivelisse assists Diamante with Sliced Bread for the win at 7:19. Not too bad, but I found myself dwelling on the empty arena setting more than usual, **.
Winners: Ivelisse and Diamante

The Nightmare Sisters are asked if they can stick to business in the finals. Brandi is sure they can, but Allie hasn't forgotten about the nonsense with the action figure. Brandi dismisses Allie and brags that she'll have a second action figure before any other AEW woman gets a toy. She's probably right.

Ivelisse and Diamante are interviewed about making the finals. They both waited too long for this opportunity and simply have to win.

Final Thoughts: Nothing worth going out of your way to see, although Brandi's antics are reaching Wrestlecrap territory once again, and I know some of you are into that sort of thing.