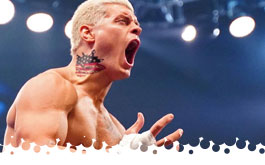 Taped from the Greensboro Coliseum in Greensboro, North Carolina. Our hosts are Taz, Excalibur, and Ricky Starks.

Jungle Boy (with Luchasaurus and Christian Cage) vs. Isiah Kassidy (with The Hardy Family Office)

Fans sing and dance along to "Tarzan Boy." Quen's distraction gives Kassidy a rollup for 2. Kassidy stomps JB into a heap, but stops to pose. Jungle Boy capitalizes with a step up springboard arm drag and then a dropkick. Kassidy hits a cutter over the top rope, then delivers a tornado senton to outside. Slingshot senton by Kassidy gets 1. Hardy sneaks a hard cheap shot, and Kassidy follows with a rolling dropkick for 2. Back from commercials, Jungle Boy strikes his way back into the contest. JB dropkicks the ankle and then nails a twisting lariat. JB's fisherman buster gets 2. Kassidy answers with a poison rana that seemed to injure his own groin. JB hits a belly to belly into the buckles, then a German suplex for 2. JB hits the tope suicida, kicks Quen away, prompting Christian to take Quen out of commission. Luchasaurus chokeslams Jora Johl and fends off Hardy. Meanwhile, JB finishes Kassidy with the Snare Trap at 8:57. Kassidy looked like a wet noodle and seemed to be working extra hard to hit his spots. Also, this played out in such predictable fashion, I almost could have written this PBP without watching, *½.
Winner: Jungle Boy

Miro video promo. He's still lost in limbo, having been "cast from heaven." Redemption doesn't come with a smile, it comes with a price. He's coming back to be champion. We'll feel the joy in his cruelty, or shame in our's.

No entrance for Bronson. Hook marches out with the same swagger as last time. Bronson grabs a wristlock, but Hook aggressively takes him down and goes for the legs, prompting a desperate rope break. Hook blocks a body slam and lights Bronson up with stiff shots. Bronson returns fire (and the fans boo him, haha), but Hook takes him down for a Sugar Hold. Bronson escapes and leans into the crowd's booing by raking the eyes for a side slam. Hook casually no-sells and nails a Northern Lights suplex. BACKDROP DRIVER!!! Hook finishes with the Tazmission, which will be known as Red Rum from here on out, for the win at 3:04. Yeah, Hook is a total babyface, the fans love him, there is no point in fighting it. Bronson got in a bit too much to call this a squash, this felt like an urgent fight without a second to spare, **¼.
Winner: Hook

Tony Nese nods at Hook from the stands.

Eddie Kingston talks to the camera. He's not mad at Daniel Garcia, actually, he sort of respects him for stealing a pinfall. Eddie will team up again with Santan and Ortiz to face Garcia and 2point0 soon.

They share a friendly handshake, but I must confess I'm disappointed that Kris didn't go for a boop. She doesn't let me know, and boops Leyla after a clean break in the buckles. Leyla doesn't appreciate the sentiment and grabs a tight headlock. Kris absorbs a shoulder block and shows Leyla how it's done. Hirsch hits running knees in the corner, followed by a swinging dropkick. I'm sensing some hostility from the fans, but some supporters rally behind Kris while she hits a powerslam for 2. The fans do appreciate Statlander's extended delayed vertical suplex. Hirsch comes back with a low dropkick, and then a cross armbreaker. Kris escapes with a dead light charge into the buckles, but Leyla applies a hanging armbreaker. Leyla's second rope moonsault is almost botched, but gets 2. Kris hits a Blue Thunder Bomb for an ill-advised 2 count, and Hirsch arbitrarily answers with a German suplex. Kris comes right back with the Spider Crab and wins at 6:26. A bit too spotty, sloppy, and over-booked for my liking, *¾.
Winner: Kris Statlander

Leyla slaps away a handshake and storms off. Hirsch could use some character development.

Mark Henry hosts the split screen interview between TNT Champion Sammy Guevara and Cody Rhodes (with Arn Anderson). Henry wants to know how Cody plans to win when he has a "one foot out" mentality. Arn jumps in and says that you never pick a fight with someone who's p!ssed off, and Cody had better be p!ssed due to Arn chewing him out over the past months. Guevara gets offended and says he's going to be carrying AEW and Cody's @ss for years to come.

Welp, even Greensboro hates Cody, like, to the point where I forget this isn't New York. Justin Roberts takes a moment to give a shout out to DAVID CROCKETT in attendance. These guys last met on the very first Dynamite, in a match I likely overrated at ***¾, but still, they had good chemistry that night, Sammy has improved since, so my expectations are high. Bell rings, and Guevara blasts a shotgun dropkick. Cody blocks GTH, but Sammy back flips into a dropkick. Sick uppercut by Sammy, who sends Cody outside and mocks with a resting pose. Match restarts with Cody grabbing a headlock. Sammy escapes and scores a big power slam. Cody Cutter is good, but he stalls, which allows Guevara to control the ringside brawl. Sammy goes for a somersault dive, but pulls back when Cody uses Arn as a shield, and takes an awkward landing. Cody capitalizes with an arm scissors. Back from commercials, Cody delivers a delayed power slam. Guevara dodges a moonsault, but is selling an arm injury. Sammy uses his good arm to deliver a series of quick attacks, including a double springboard cutter for 2. Guevara steals Cross Rhodes, but Cody rolls out. Guevara delivers a double springboard 450 splash to outside! Sammy looks for a rana off the steps, but Cody powerbombs him into the crowd. I sure hope those fans are plants, one guy looks loopy. Back to the ring, Cody hits the Disaster Kick and Cross Rhodes, but Sammy kicks out! Guevara blocks a reverse superplex and hits GTH, but Cody kicks out! Fans chant "this is awesome." Sammy perches for the 630, but Cody gets his knees up. Cody hits a pair of Cross Rhodes and then a Tiger Driver ‘98 to win at 15:14! Fans hate that result and let him know it. I definitely overrated their first match in 2019, because this had better action, a better story, higher stakes, and far more drama, but I still think it was only ***½ (which still means it's very good).
Winner and new TNT Champion: Cody Rhodes

Cody celebrates with The Nightmare Family and Jim Crockett, like a perfectly nice and respectable guy.

Final Thoughts: The main event is an important chapter in whatever it is that Cody is doing. It seems obvious in hindsight that Cody was going to win this, due to Scorpio Sky and Ethan Page being set up as preemptive challengers. I wonder if Sammy's Inner Circle friends will have anything to say about this situation, although it seems like that group may have been quietly dissolved. Also, Hook looks like a potential breakout star, especially if the fans keep giving him the big babyface reactions. It's too early to say if Hook's reaction is the "Fandangoing Effect" where fans ironically get behind something cheesy or meme-worthy, or if this more like the "Yes Movement" with a true groundswell of fan support, but tonight made me lean towards the latter. Check out the Hook match and main event, skip the other matches, which would have been better served as Dark Elevation main events.