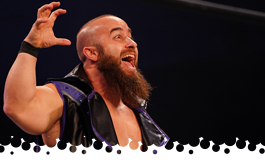 Live from the Chaifetz Arena in St. Louis, Missouri. Our hosts are Excalibur, Ricky Starks, and Taz.

The Acclaimed's freestyle rap slaps extra hard tonight, with a proclamation that they end more careers than Bryan's father-in-law (Big Johnny helped ax 18 WWE stars today). Hopefully, this won't result in an awkward Thanksgiving dinner conversation when Bryan's family gathers. Bell rings, and Bowens scores the first takedown! A second lock up results in Bowens hitting an arm drag. Bryan realizes he underestimated Bowens and goes after the arm, but gets reversed into a crucifix pin. Bowens gets overconfident and runs into a tight kick. Just when you think Bryan is going to take over, Bowens returns fire. Bryan gets slammed face first onto the apron, and Caster takes a cheap shot to send us to commercials. They return with Bowens hammering the head. Bryan mounts a comeback and hits his running clothesline. Yes Kicks get a 2 count. Bryan misses a charge into the buckles and eats an enziguri and Arrival for 2. Bryan takes a moment to dropkick Caster, and then back drops Bowens onto his partner. Bryan takes the Acclaimed down with an outside high crossbody! Missile dropkick by Bryan, then traps the wrist for face stomps. The Yes Lock submits Bowens at 9:00! Satisfying TV formula match, with Bryan playing his greatest hits for an appreciative crowd, ***.
Winner: Bryan Danielson


Tony Shiavone talks to Andrade, MJF, and FTR backstage. They think Cody Rhodes sucks, FTR are the "greatest luchadores of all time," and are happy to take Andrade's money. They can't help notice that Pac disappeared again like a British b!tch, so Dax wants him one on one on Dynamite.

CM Punk comes to the ring to talk. He quips about pretending to jog in the ring for 3 ½ minutes of commercial time and invites Eddie Kingston to the ring. Eddie's music hits, but there's no Eddie. Punk thinks he needs to just talk more, since Eddie feels more comfortable when he's interrupting someone. Eddie finally marches in with mic in hand. Punk wants an apology, and Eddie gives him a sarcastic, condescending, biting "world's smallest violin" apology. Kingston says that early 00's indie guys like CM Punk were inspirational heroes, but all he ever did was judge him. Punk admits they did judge Eddie, but it was with his best interests in mind, and were holding him to a standard of greatness. Sadly, Eddie is just a bum. Eddie retorts that nobody in the locker room ever wanted Punk in AEW, so he'd better get out. Eddie wants to fight Punk at Full Gear, but Punk thinks Elevation or Dark would be more fitting for someone like Eddie. Kingston thinks Punk should leave again for 7 years, so Punk interrupts with a brutal headbutt! The locker room empties for a pull apart brawl and the crowd loves this. If you didn't watch this, you missed something special.

Tony Shiavone interviews Christian Cage and Jurassic Express backstage. Christian doesn't think Adam Cole and the Young Bucks are tough guys, so they're going to meet at Full Gear in a Falls Count Anywhere six man tag. Sounds like an invitation to jump off set pieces.

TBS Championship Tournament - Opening Round:
The Bunny vs. Red Velvet

Jade Cargill and Mark Sterling are hanging out in the front row. Velvet rushes in for a Thesz press. Velvet's body shots seem to injure Bunny's ribs and she flees the ring, only to eat a clothesline. Velvet lets Jade distract her, and Bunny drives her into the rails. Bunny stomps Velvet's face into the ring steps. Bunny also has words for Jade, but quickly refocuses on her vulnerable opponent. Velvet makes a quick comeback and hits a stunner for 2. Bunny ducks some kicks for a roll-up, and DVD for 2. Thrust kick by Bunny, but Velvet kicks the midsection and hits the Final Slice to win at 3:40! Decent short match, anchored by Velvet injuring a body part to win, **.
Winner: Red Velvet

Mark Henry hosts the split screen confrontation between The Superklique and Dark Order ahead of the main event. John Silver admits that he asked Adam Cole to cut his hair, become a manager, and change his name to BUDGE! Cole is sick of Silver's fun and games and calls him insecure. Silver just beat them while dressed as Bambi and still feels smug about it. Cole dismisses the loss as a fluke, he is not someone to mess with. I'm glad we're seeing this side of Silver on TV.

Adam Cole (with The Young Bucks) vs. John Silver (with the Dark Order)

The fans like Cole enough to pop for his entrance but also play along with a loud "BUDGE" chant. Cole doesn't think this is funny and aggressively takes it to Silver at the bell. Silver manages a press slam onto the ropes. Silver flexes his muscles while hitting hip tosses. Cole answers with an overhead snapmare onto the apron! Cole applies a camel clutch at ringside, and Bucks help mock Silver with stereo kisses. Back from commercials, Silver makes his comeback right on cue. Silver reverses a rana into a Liger Bomb for 2. They trade kicks, and Cole hits a mean neckbreaker for 2. Silver surprises with a big time lariat! Snap German suplex by Silver, and head kick would have ended it but the Bucks put Cole's foot on the rope. The Dark Order return to neutralize the Bucks. Silver blocks Cole's low blow, kicks him in the groin, and hits a spinning Liger Bomb but COLE KICKS OUT! Fans chant “this is awesome.” Silver reverses Panama Sunrise with an Alabama Slam into the buckles, but he runs into a pair of super kicks! Cole drops the BOOM and wins at 11:05, effectively breaking the hearts of everyone in attendance. They are really onto something with Silver's clever underdog shtick, Cole had to dig deep to put him away, ***¾.
Winner: Adam Cole

Final Thoughts: The in-ring action was good, but Punk and Kingston stole the show with their vicious exchange of words. I can't blame you if you didn't stay up to watch Rampage, but this episode is well worth catching up on through DVR.