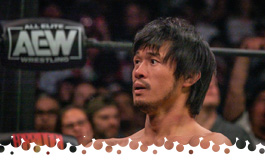 Video promo highlighting Katsuyori Shibata's journey back from a serious brain injury to return to the ring.

This is only Shibata's third match since 2017, and the live crowd seems to know it. Cassidy chose Shibata as his “dream opponent” so I expect he'll TRY tonight. He puts his hands in pockets and Shibata grabs a headlock. Cassidy reverses with a head scissors, Shibata head stands into an ankle lock, then misses a penalty kick. They return the ropes, Cassidy knocks Shibata outside for a tope into the rails! Shibata throws OC into the rails in vicious fashion, and takes a seat in the ring. OC returns fire in a slugfest, and they avoid a double countout. Back from commercials, Cassidy has the advantage, and pockets his hands for a running dropkick. He hits some disrespectful sloth kicks, but Shibata answers with an STO. Shibata mocks with his own sloth kicks, which pisses Cassidy off. They both sit criss crossed together, Cassidy hits sloth strikes, and Shibata answers with a stiff onslaught of attacks. Cassidy answers with a tight back suplex, Shibata returns the favor, and they butt heads and collapse to some applause. Cassidy hits a Penalty Kick, but Shibata no-sells. Cassidy hits another Penalty Kick, Shibata doesn't flinch, so Cassidy loses his temper. Shibata hits a mean leaping elbow. Shibata applies an abdominal stretch and then an octopus, but Cassidy gets a late rope break. Cassidy reverses with Stun Dog Millionaire! Cassidy sells a hurt neck while hitting face kicks, but Shibata surprises with a Death Valley Driver! Cassidy counters a second DVD into a Stunner, and then hits a DDT. Beach Break by Cassidy, but SHIBATA KICKS OUT! Orange Punch connects, but Shibata no-sells for a sleeper! Shibata breaks free with a back suplex, but runs into an Orange Punch and Cassidy retains at 11:12! HELL of a sprint! This match thrived as a stiff, work-rate driven match, and as a complete novelty dream match, ****.
Winner and still All-Atlantic Champion: Orange Cassidy

Shibata and Cassidy shake hands afterwards, and OC gives Shibata his own pair of shades.

Backstage interview with Interim Women's Champion Toni Storm. She doesn't understand how Jamie Hayter could have become such a bully, they were so close during the pandemic. It upsets Toni that Hayter lets Britt Baker manipulate her, so she'll teach her a lesson at Full Gear.

Backstage interview with the Blackpool Combat Club. Claudio Castagnoli can't accept Chris Jericho attacking non-wrestlers like Ian Riccoboni. He wants his ROH Championship rematch. Bryan Danielson says he brought prestige to the ROH title, and Rampage isn't long enough for him to list his grievances against Jericho. William Regal thinks both guys have legitimate reasons to face Jericho, and orders the ROH champ to make a choice.

Madison and Jamie start with some chain wrestling. Skye tags in to help whip Madison into a drop toe hold into an elbow drop. Blue goes for Hayter's wrist, absorbs an Irish whip, and nails a high crossbody for 2. Hayter comes back just in time for commercials. Back from break, Rayne has the hot tag and is running wild through Britt. Jamie helps with a backbreaker on Rayne. The match breaks down with all four women in the ring at once. Rayne tries a crucifix bomb on Hayter, but it's reversed into a lariat for the win at 7:21. Absolutely average outing, **.
Winners: Jamie Hayter and Britt Baker

Britt takes the mic to gloat about what a great bully she is while Jamie keeps beating up Rayne. Toni Storm arrives to knock down Rebel, throw Britt into the rails, and brawl with Jamie. Storm locks on a sloppy Cloverleaf while Jamie taps out. Britt breaks it up with a belt shot to Toni's face. Based on what I've seen for TV build, this is the Full Gear main event.

Video recap from Dynamite, in which Chris Jericho picked a fight with Lamarre Jackson. Now, Tony Shiavone is standing by with Sammy Guevara and Chris Jericho, and pleads with them to stop attacking interviewers. Jericho doesn't think the Blackpool Combat Club really likes each other, so he thinks about choosing both Claudio and Bryan as his next challengers. But, Jericho isn't stupid, so he considers brining Guevara into the match to back him up. He knows Sammy will do the right thing because he's his little buddy. Sammy seems to have other ideas, but we'll have to wait until Full Gear, or Final Battle, to know for sure.

Ricky Starks comes to the ring to talk. He complains about his recent lack of TV time. People like him because of his cool pose, and he likes the people too. Starks enters himself into the Eliminator Tournament for the AEW Championship! Things are crumbling around here, so he's going to carry AEW on his bare back. He doesn't care if he faces MJF or Moxley, because he deals in Absolutes. This guy is starving for TV time and he earned his keep tonight.

Tony Shiavone chats with Sammy Guevara backstage. Sammy deflects a question about his loyalties to Jericho, and says the ROH title with stay with The Ocho. Sammy would rather talk about Bryan Danielson, and challenges him to a ⅔ falls match on Dynamite.

Wardlow starts and chases Kaun out of the ring. Wardlow corners Kaun with mean shoulder thrusts. Kaun fires back with body shots, Wardlow answers with a clothesline. Joe tags in but gets mandhandled by Liona. Joe fires back with jabs. Enziguri by Joe, but he gets distracted by Kaun, which allows Liona to bite his forehead. Back from commercials, Joe escapes Kaun's chinlock. Joe plants Kaun with his patented uranage. Wardlow gets the hot tag and cleans house to a more subdued crowd reaction than I'd have hoped for. Wardlow gives Liona a German suplex and kills Kaun with a spinebuster for 2. Liona ambushes Wardlow, but Joe pulls him outside for a rear naked choke. Wardlow knocks Prince Nana off the apron, Kaun sneaks a rollup for 2. Wardlow head butts Kaun and finishes with a Powerbomb Symphony at 9:12. Decent extended squash, but you can see how the lack of focus on Wardlow in recent months has hurt his push, **.
Winners: Wardlow and Samoa Joe

Powerhouse Hobbs arrives to confront Wardlow on the stage. Hobbs makes it clear that he wants the TNT Championship, even if it's fallen off the map.

Final Thoughts: The opener with Cassidy and Shibata ruled hard, so that makes this Rampage an automatic recommendation, but sadly you can turn it off as soon as it's over. Rampage does not feel like a third hour of Dynamite right now, even if Tony Khan and company say otherwise.