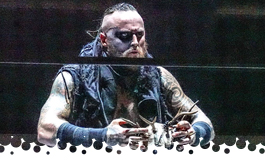 10 and King start with a hoss fight. 10 seemingly hurts his knee, forcing a quick tag to Silver. Matthews tags in to trade holds with Johnny Hungie, and they reach a stalemate. Silver avoids getting double teamed and Reynolds tags in for a rana attempt on Black, who cartwheels to safety. Reynolds ducks Black's roundhouse kick, and they have a staredown to applause. The match breaks down into a 3 on 3 brawl. Back from commercials, Reynolds is stuck in the House of Black's corner. 10 gets a hot tag and runs wild like a big man should. Matthews saves Black from a full nelson with a Meteora. Reynolds throws Matthews into Silver's uppercut, and they briefly manage to swarm King before getting dismantled. 10 boots King out and puts Black into another full nelson. Black pulls off 10's knee brace and locks in a kneebar! All hope looks lost for Dark Order, but Miro arrives to beat up Matthews and King on the ramp. Reynolds rolls up Black to win at 9:06! Good match, but didn't try to be an epic like other matches in the tournament, **¾.
Winners: The Dark Order

Miro wants a piece of Black, but King sends him into the ring steps. The Dark Order disappear while the House of Black triple team Miro in the ring. Help arrives in the form of Darby Allin and Sting, seemingly setting up yet another trios match for All Out.

Backstage interview with FTW Champion Hook. He doesn't care about a disrespectful video and takes off. 2point0 steal some airtime to trash talk Hook.

Nemeth says the best part of growing up in Cleveland was leaving Cleveland, and now he's the Hollywood Hunk. Personally, I find his IMDB page to be lacking. Nemeth doesn't stop talking trash and eats a brutal headbutt. Jay Lethal and friends show up on the stage to watch Wardlow totally dominate Nameth and win via Powerbomb Symphony at 1:33. Proper squash, Wardlow continues to look like a star.
Winner: Wardlow

Backstage interview with Andrade El Idolo, Rush, and Private Party. They've all been losing lately and don't quite trust each other. Rush reminds them that he turned on his own brother, so Private Party better step up or something.

Hobbs doesn't get paid by the hour and nails a brutal clothesline. Hobbs hits a second clothesline and then mocks Ricky Starks' pose. A spinebuster finishes it at 1:05. Good squash.
Winner: Powerhouse Hobbs

The big screen reveals that QT Marshall and The Factory are beating down Starks. Hobbs is pleased, but I'd caution him from joining the Job Squad.

Backstage interview with TBS Champion Jade Cargill and the Baddies. Jade tells everyone to scram, what have they done for her anyway? She wants Athena at All Out, but gets her right then and there via sneak attack.

Sammy Guevara and Tay Melo (with Angelo Parker) vs. Ortiz and Ruby Soho

Ruby still wants revenge after getting her hand slammed in a car door, but Tay gains the early advantage by stomping the bad hand. Ruby shoulder thrusts Tay into the buckles, but misses a running kick. Tay kicks the gut, but Ruby answers with an elbow strike. Tags are made, and Ortiz dominates with short arm clotheslines. Ortiz slams Ruby onto Sammy for a 2 count. Tay's distraction lets Sammy whiff on a big boot to send us to commercials. They return with Ruby rallying against Tay. Sammy puts Ruby on his shoulders but eats a poison rana. Tay's diving crossbody on Ruby gets 2. Sammy shields his wife from Ruby, but Ortiz ambushes with a DDT. Ortiz blocks Tay's DDT, and Ruby hits No Future, but Sammy breaks the cover. Sammy menaces Ruby, so Ortiz charges in on a tag. Anna Jay interferes by throwing Ruby into the steps. Sammy hits Ortiz with a cutter to win at 9:44. Fun, lively match, but defined by shenanigans, **½.
Winners: Sammy Guevara and Tay Melo

Mark Henry hosts the split screen confrontation between Dustin Rhodes (with Arn and Brock Anderson) and ROH World Champion Claudio Castagnoli (with Wheeler Yuta). Dustin says he's going to give Claudio the best version of himself ever. Claudio is pleased, he wants to face Dustin the legend. IT'''S TIME FOR THE MAIN EVENT!

They shake hands and lock up. Dustin hits a shoulder tackle and roll-up for 1. Armdrag by Dustin gets another 1 count and stalemate. Claudio appears to have underestimated Dustin. Claudio works a side headlock and then a shoulder tackle. Dustin takesa timeout and then goes for a sunset flip, but Claudio reverses for 2. Tempers flare, and Claudio starts throwing uppercuts. Dustin hits an atomic drop for 1. Claudio ducks a crossbody to send Dustin crashing to ringside! Back from commercials, Claudio is working a crossface. Dustin escapes and hits a side slam! They slug it out until Dustin hits some lariats, sending the champ outside for a cannonball! Dustin hits another lariat for 2. Flying rana by Dustin, uppercut, and Code Red for 2! Claudio comes back with his own lariat for 2. Claudio puts Dustin through the Giant Swing but only gets a 2 count, so he reapplies the crossface. Dustin reverses into a pinning predicament and nails a messy piledriver for another 2 count. They have an awkward exchange in a leap frog spot, in which Claudio suffers a low low. Claudio recovers with a pop up uppercut and wins at 12:23. This was cooking until the awkward finish, ***.
Winner and still ROH World Champion: Claudio Castagnoli

Final Thoughts: Just an enjoyable hour of wrestling, but nothing you'd be sorry to miss.