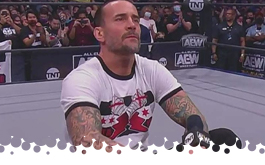 Live from a sold out United Center in Chicago, Illinois. Our hosts are Taz, Excalibur, Jim Ross, and Mark Henry. The capacity crowd is chanting "CM Punk" for some reason.

Well, they cut right to the chase when "Cult of Personality" blasts and out comes CM PUNK! He soaks the moment up for all it's worth before declaring "It's clobberin' time" and making his way to the ring, hugging fans (and almost getting pulled back in by overzealous security). There's a closeup of a fan breaking into tears in the stands, and a constant "CM Punk" chant. Moments like this are why AEW was created. They'll need more time, so they take a commercial break. We return and Punk says "You guys know how to make a guy feel like Britt Baker in Pittsburgh." He claims he didn't plan what to say because he didn't know how he was going to feel, and he puts over the Chicago fans. Punk says he heard the chants over the past 7 years, and while he can't get to everything tonight, he's got the time on Wednesdays, Fridays, and 4 weekends a year, he's not going anywhere. Punk addresses the disappointment some fans had with his departure, but he wants everyone to understand that he was never going to get himself healthy staying in the same place that made him sick in the first place. Punk has a story to tell and takes a seat. He reminisces about how he cried during his last match in Ring of Honor because he was leaving a place he loved. On August 13th 2005 he left pro wrestling, but on August 20th 2021, he's back. Punk is here for the fans, and for himself, because now he's surrounded by the kind of talent he wish he'd been around 10 years ago, and he's got scores to settle. He calls attention to Darby Allin and Sting, hanging out in the rafters, and announces himself for All Out. Last thing, 7 years was a long time to wait, so Punk asks everyone to grab a free ice cream bar, on him. I can't even begin to objectively critique this promo, because I'm so high on emotion, so let's just leave it at that.

Christian Cage pumps up Jurassic Express. The Young Bucks won't be able to handle them in a cage match. Also, Christian is coming for Kenny Omega's World title at All Out, and will also take his soul.

The Young Bucks show up uninvited to watch on the stage. Jungle Boy starts against Kassidy, and they sprint towards a stalemate. JB hits an elaborate tight rope arm drag on Quen, leaping over Kassidy's interference. Quen pulls the hair to plant JB onto the canvas and send us to commercials. They return with Jungle Boy hitting a makeshift Poetry in Motion and Luchasaurus roars in on a hot tag. The crowd has enough energy left to get behind Jurassic Express. Kassidy blocks the tandem superplex and hits Jungle Boy with a CANADIAN DESTROYER OFF OF LUCHASAURUS! Quen missile dropkicks Luchasaurus, and Kassidy hits a guillotine neckbreaker. Quen takes down Luchasaurus with a (glancing) springboard shooting star press to ringside. Jurassic Express block Silly String, and Luchasaurus plants Kassidy for JB's nearfall. Matt Hardy runs in, and Kassidy nearly rolls up JB for the win. JB reverses Gin n' Juice into a tornado DDT. Luchassauurs hits a big boot and serves Quen up for Jungle Boy's sitout powerbomb to win at 10:10! Nonstop, crazy, elaborate action, despite a few misfires, ***¾.
Winners: Jurassic Express

Don Callis and AEW World Champion Kenny Omega react to Christian's words from earlier. They offer platitudes about how much trouble Christian is in at All Out.

Jade towers over Hogan and shoves her down hard. Hogan fires off kicks but Jade cuts her down with a thrust kick. Jaded ends it at 1:08. Decent squash that served its purpose.
Winner: Jade Cargill

Update, CM Punk will be at next week's Dynamite in Milwaukee, so maybe they'll move some tickets between now and then.

Mark Henry interviews Jon Moxley and Daniel Garcia/2.0 via Zoom. The jabronis question Moxley's toughness. Moxley is still pissed about their recent assault and is going to commit a felony in the ring.

Jon Moxley (with Eddie Kingston) vs. Daniel Garcia (with 2.0)

Moxley tears into Garcia as promised, stomping him into the buckles and hitting an overhead suplex. Snapmare by Moxley and then several kicks to the chest. Garcia dropkicks the leg and continues the assault. Moxley reverses an ankle lock, but Garcia unloads with elbow smashes to the face. Moxley fires back with German suplexes. Garcia rolls back into an ankle lock, Moxley considers tapping, but gets the ropes. Moxley is limping but hits a clothesline. Moxley outbrawls Garcia and hits an inside out powerbomb. Garcia blocks the Paradigm Shift and locks on a deep Sharpshooter. In fact, the hold is too deep, as Moxley easily reaches back to reverse into a bulldog choke and wins at 4:08! Really good back and forth short match, reminiscent of late 90's WWF, **.
Winner: Jon Moxley

2.0 attempt a beatdown, but Sting and Darby Allin show up to help Moxley and Kingston dismantle the jabronis. Stinger Splash and Scorpion Death Drop pops the fans. Allin hits a Coffin Drop on 2.0 for the exclamation mark. Darby has a date with CM Punk at All Out, but the fans still like him.

Final Thoughts: About half of the broadcast was devoted to the cathartic return of CM Punk that made me feel many feelings. That alone is a wonderful piece of history that requires your attention. Thumbs Up.