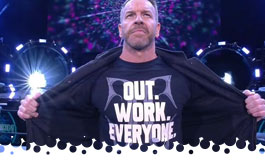 Live on TNT from the Petersen Event Center in Pittsburgh, Pennsylvania. The building looks packed. Our hosts are Excalibur, Mark Henry, Taz, and Chris Jericho.

If Christian is washed up, nobody told the fans in attendance, they are buzzing at the opening bell. The guys let the moment breathe for a few moments before locking up. The fans give them a dueling chant. Christian gets a clean break and gives Kenny a middle finger salute. They each tease their finishers, and Omega retreats for some advice from Don. Kenny lures Christian into giving up the higher ground, but Christian avoids a tope and hits a baseball slide dropkick. Callis distracts Christian, allowing Omega to push him off the top rope for a rough landing onto the floor. With that, they cut to commercials. They return with Christian escaping a cravat and hitting a snap suplex. Christian blocks a superplex and nails a sunset flip powerbomb. Christian unloads mounted corner punches, steps on the back, and floats over for an uppercut. Flying uppercut by Christian gets 2. Omega blocks the Killswitch and hits a Finlay Roll and moonsault for 2. Reverse DDT by Christian gets a hot nearfall. Christian charges into a V-Trigger, Omega nails a powerbomb, and a second V-Trigger for 2. Christian blocks One Winged Angel, Omega rolls through a sunset flip and misses a V-Trigger into the buckles, and Christian's Killswitch only gets 2! Omega stumbles up and serves a pair of Dragon suplexes. Christian snaps Kenny's neck on the ropes and hits a Frog Splash but KENNY KICKS OUT! Callis distracts the ref while Kenny hits a low blow. The Young Bucks slide in a chair, but Christian reverses with a Killswitch onto the chair and wins at 15:28! Huh, my 2021 Bingo Card didn't have "TNA Champion Christian." Terrific, pay-per-view worthy match that starts Rampage on a hot note, ****.
Winner and new Impact World Champion: Christian Cage

Jurassic Express arrive to celebrate with Christian as he hoists both the Impact and TNA titles into the air.

Mark Henry interviews Christian Cage backstage while Jurassic Express pops champagne. Christian feels good but admits that it was really hard to beat Omega, but he's ready to do it again at All Out.

Fuego Del Sol video promo. He's gotten over as an endearing loser on the Youtube shows and now he's going to give God's Favorite Champion a baptism by fire.

Fuego also has a full-time AEW contract on the line here. Fuego ambushes Miro with a tornado DDT. Miro looks loopy and eats a second tornado DDT. Miro rolls to ringside and nearly gets counted out. He crawls back and Fuego hits a third tornado DDT for a hot nearfall. He then flies onto Miro's shoulders and eats a Samoan drop. Thrust kick by Miro and Game Over ends it at 2:18. This was far more interesting than most 2 minute matches and served its purpose, *½.
Winner and still TNT Champion: Miro

Miro rips up Fuego's contract just to be a d!ck. The fans give Fuego a standing ovation anyway. His luck turns around when Tony Khan gives Sammy Guevara a fresh contract to offer Fuego. Sammy puts Fuego over for getting over with the fans despite his constant losing. Sammy is happy to inform his best friend that he's officially All Elite. This was nice, but needlessly cheapens match stipulations, which is something AEW has been careful to avoid thus far.

Sting and Darby Allin hang out in the rafters.

Mark Henry interviews Britt Baker and Red Velvet on split screens, CNN-style. Velvet reminds us that Britt attacked her with a crutch and is eager to ruin her night in Pittsburgh. Britt is immune to rain and tells Velvet to stir her sh!t up somewhere else.

The partisan crowd hates Velvet and loves Britt. They lock up to a loud "DMD" chant. They get a break and trade forearm shoves. Velvet goes after the arm, but gives up a chance to easily stomp Britt's hand. Britt misses a head of steam, and Velvet goes back to work on the arm. Leg lariat by Velvet and then a standing moonsault for 2. There's only 9 minutes of showtime left, but they cut to commercials anyway. They return with Britt back in the driver's seat, but Velvet turns it around with body shots. Kris Statlander is spotted in the crowd. I feel like I missed some botches while typing and being distracted by Statlander. Britt hits a sweeping neckbreaker for 2, but her hand is too injured to properly apply Lockjaw. Velvet applies a deep armbar and pulls off Britt's glove. Rebel hops onto the apron so Velvet throws the glove in her face, giving Britt a chance to roll her up for 2. Rebel gets ejected! Thrust kick by Velvet and then a moonsault for only 2! The fans breathe a sigh of relief. Britt pops up for a brutal neckbreaker and curb stomp, but Velvet kicks out. Velvet steals Lockjaw, but Britt reverses, only for Velvet to smash her bad hand. Britt reapplies the hold with her other arm and wins at 10:39! I spent the first half lamenting how disappointing this was (despite the hot crowd) but that second half more than made up for it, with Britt digging deep and overcoming an injury to win, ***.
Winner and still AEW Women's Champion: Dr. Britt Baker

Kris Statlander attacks Britt (to boos) but gets ambushed by the returning Jamie Hayter, who seems to be aligned with Britt. What an odd, yet strangely delightful surprise.

Final Thoughts: Good effort for the inaugural Rampage. There were enough little format tweaks and production changes to differentiate this from Dynamite, and the one hour length is pleasing. I don't know if Rampage will always be destination viewing, but they pulled it off tonight.