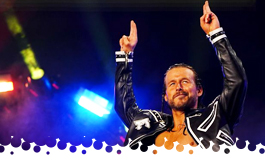 Taped from the Wintrust Arena in Chicago, Illinois. Our hosts are Chris Jericho, Taz, and Excalibur.

Cole immediately blasts a running pump kick and then pummels Uno into the corner. Quick backstabber by Cole has Uno reeling. Uno passes Cole's leg to the referee to hit a timely cutter. Uno takes control with kicking offense, but Cole blocks his senton. Knee to the head by Cole, and then some low thrust kicks. Cole drops the Boom and wins it at 2:29! I was expecting a three star special, instead we got a pretty effective squash for Cole.
Winner: Adam Cole

Cole grabs the mic and lists off everyone he's beaten so far in AEW. He's pretending to still be undefeated in singles action because that's what the official record book says. Well, he's technically correct, which is the best kind of correct. Cole demands some damn respect and boasts that no matter where he goes, he eventually ends up running the show. People enjoy certainty, so we can all feel certain that he will become AEW World Champion.

TBS Champion Jade Cargill and Smart Mark Sterling talk to the camera about how awesome Jade's undefeated streak is. Jade wants to know who's next on That B!tch Show.

Sammy is sporting taped ribs as a lingering effect from the ladder match with Cody. Kassidy hits a chop, they run the ropes until Kassidy scores a combination of attacks. They trade slaps to the face and turn up the intensity with a brawl, but Kassidy scores an advantage by attacking the ribs. Sammy manages a dropkick and then hits a dive. The AHFO interfere and Hardy hits Sammy with a Side Effect onto the ring frame. Back from commercials, Sammy makes his heroic comeback right on cue. Sammy is too hurt for a GTH, so Kassidy elbows his lower spine. Sammy hits a thrust kick to buy some time. He prepares to fly when Andrade El Idolo shows up to check on his investment. Sammy rolls through a 450 splash attempt, but Kassidy catches him with a backbreaker into a backstabber for a good nearfall. Kassidy hits a stunner and then a slick tope suicida, complete with a swanton bomb to the lower spine for a great nearfall. Sammy blocks a Twist of Fate, they trade corkscrew kicks. Sammy takes a moment to take down Quen with a springboard moonsault, and then hits Kassidy with a springboard cutter for a false finish I fell for. The GTH finishes it at 9:18. Not everything Kassidy did looked good, but this had a sound structure and story you could sink your teeth into, ***.
Winner and still TNT Champion: Sammy Guevara

The AHFO get ready to gang up on Sammy, but Darby Allin rushes in. Andrade takes the opportunity to offer him a contract, but Darby is firmly aligned with Sammy...at least until he remembers that Sammy is carrying the TNT Championship. The AHFO backs off, leaving Darby to give Sammy a warning pat on the chest.

QT Marshall video promo, complaining about how Hook is cold-hearted and has the audacity to walk over people. He'll teach him a lesson next week.

Tony Shiavone asks Kris Statlander about Leyla Hirsch' attitude. Kris thinks Leyla should start acting like a professional, which earns her an ambush chair attack by Ms. Hirsch. Red Velvet arrives too late and does the hilarious overly concerned act.

Rosa starts with a shotgun dropkick, and drops some elbows onto the spine. Rosa drapes Mercedes for a running senton to the back. Rosa continues attacking the spine with a vertical suplex outside. Martinez answers with a hard spinebuster in the ring. Back from commercials, Martinez hits an avalanche DVD but Rosa kicks out. Rosa makes a gritty comeback, hitting an Emerald Fusion, but Martinez rolls outside. Martinez clocks Rosa in the head with a lead pipe and the referee calls for a rare DQ at 7:44! Martinez loses, but looks like the winner as Rosa is down and out. This was living up to expectations until the sudden non-finish, **½.
Winner via DQ: Thunder Rosa

Tony Shiavone asks Mercedes Martinez about the lead pipe. Martinez said this was the plan all along. AEW Women's Champion Dr. Britt Baker (with Jamie Hayter and Rebel) shows up to complain that a DQ was not part of the bargain. Britt orders Mercedes to beat Rosa properly, or she'll make sure that her time in AEW is shorter than her last job. Feels like Britt vs. Rosa is the plan for Revolution, and that Mercedes is the dragon she'll have to slay first.

Mark Henry hosts the split screen interview between FTW Champion Ricky Starks (with Powerhouse Hobbs) and Jay Lethal. Lethal admits that he's worried about his numbers disadvantage, but promises to knock down Ricky's ego. Starks brags that he's cut from a different cloth, Lethal has never dealt with someone like him. Lethal wants to find out what Taz will do to Starks should he lose the FTW title. IT'S TIME FOR THE MAIN EVENT!

Crowd gives them a dueling chant as they lock up. Lethal's experience shines through early, so Starks slaps him. They exchange chops. The fans look tired but sound interested. Lethal trips Starks to outside and hits a tope suicida. Crowd asks for another tope, Lethal obliges. Powerhouse Hobbs steps in to buy Starks some time. Starks slips by the ring post to hit a sneaky clothesline and take control. Back from commercials, Lethal fights out of a front headlock. Lethal blasts a clothesline to give them a breather. Lethal Combination gets only 2. Starks blocks an Alabama Slam and dishes out a Liger Bomb for 2. The crowd sounds as tired as they look now, I think it's time to go home. They brawl back to their feet, Lethal takes a moment to dropkick Hobbs off the apron. Hobbs swats away Lethal's tope, but Dante Martin runs in to hit Hobbs with a springboard dive. Lethal hits Starks with a cutter, Starks blocks the Lethal Injection. Lethal gets a close nearfall and tries Lethal Injection again, but Starks impressively reverses into Roshambo to win at 12:51! That finish was fire, the match as a whole stalled in second gear due to everyone being kept up past their bedtimes, **¾.
Winner and still FTW Champion: Ricky Starks

Final Thoughts: This episode was another easy hour of wrestling, albeit, a much more skippable episode than recent Rampages. I'm not a fan of AEW using DQ finishes, but since they currently average about one per year, I can forgive them for using it to advance Rosa's chase. My overall feelings on this episode are pretty neutral, so if you're busy this weekend, you can leave this on your DVR for later.