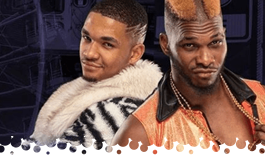 Moxley doesn't appreciate Caster's diss and clocks him before the bell. Moxley takes his anger out on Bowens with aggressive punching. Moxley bows to Aubrey Edwards when she admonishes him for throwing Bowens into the rails. Bowens reverses a tug of war into the ring post and takes control. Russian leg sweep by Bowens gets 2. Moxley answers with a twisting powerbomb. Caster grabs Moxley's boots to allow Bowens to hit a ripchord neckbreaker. Back from commercials, Bowens delivers a superplex. Moxley desperately back drops Bowens onto Caster, and then hits Caster with the tope. Bowens catches Moxley on his return with a draping DDT. Moxley dominates a slugfest and hits a piledriver for 2. Bowens builds steam with a kick to the chest and power slam for some nearfalls. Bowens tries to use the boombox, but Aubrey disarms him. She doesn't see Caster toss in some chains, but Moxley cuts him off with a cutter. Moxley removes Caster and nails a King Kong lariat. The Paradigm Shift ends it at 12:06. Really nice win for Moxley, and this told an appealing story of Bowens stepping up to take a returning star to the limit, ***¼.
Winner: Jon Moxley

Meanwhile, Bryan Danielson is spotted watching Moxley on the screen. He smirks at the camera and walks away.

Andrade El Idolo barges into Sting's dressing room and finds Darby Allin. He demands to know where Darby's "boss" is and offers him a contract. Darby laughs at the notion that he works for Sting. Money doesn't mean a lot to Darby, so he abruptly ends this "business meeting" and tells them to get the hell out. Andrade feels threatened by Darby's bat, and still wants a word with Sting.

Cash takes Johnson to school with shoulder blocks, but he may be too overconfident as Brock's blind tag lets Lee hit a rana. Quick tag to Dax, who relishes the chance to lock up with another bruiser. They trade headlocks and head scissors until reaching a stalemate. Brock seems to be evenly matched with Dax, and Lee helps him with a double back body drop. They clear the ring and Johnson hits a brutal flying senton onto Cash. Johnson wipes out Dax with a dive, follows with a flying crossbody for 2. Back from commercials, FTR have taken control of Johnson, but he survives with a cutter. Hot tag to Brock, who explodes with clotheslines. Brock hits a back suplex on Dax, and whips Cash into a gut wrench powerbomb! Brock and Cash trade pinning predicaments, Brock catapults Cash into Lee's enziguri, which sets up a DDT and frog splash, but Cash gets a rope break! Arn knocks Tully down! Lee kicks off Dax to cover Cash, but Dax tags himself in to set up a tandem piledriver for the win at 10:07! Really good formula tag, these teams have fantastic chemistry, and Brock delivered an eye-opening performance, ***.” Winners: FTR

Thunder Rosa video promo talking more trash to Mercedes Martinez. This entire feud has been them threatening each other via video packages. Mercedes wants to fight Rosa too, so her AEW career can start at 1-0.

Julia is still sporting an eye patch from Malakai Black's toxic spray. Jade grabs a headlock and nails a shoulder block. Julia leap frogs a charge but gets caught in a tilt-a-whirl backbreaker. Jade takes a break to exercise. Julia sneaks up for a rollup, and connects with some thrust kicks. Julia reverses an electric chair into a rana, but Jade pops up for a bicycle kick. Jaded ends it at 2:25. Great squash match, especially when you factor in the experience level fo the competitors.
Winner and still TBS Champion: Jade Cargill

Mark Henry hosts the split screen interview between AEW Tag Team Champions Jurassic Express (with Christian Cage) and Private Party (with Matt Hardy). Matt says this is a new and improved Private Party, and they've beaten Jurassic Express before. Cage thinks Matt is trying to convince himself and his two dipsh!ts that they have a chance. Christian says that Matt has never been on his tag team level. Isiah Kassidy thinks they are going to pound Jungle Boy's @ss. Jungle Boy offers a quick rebuttal, but it's time for the main event.

The Gunn Club are in the front row, which distracts Jurassic Express, allowing Private Party to immediately hit Gin n' Juice for a scary nearfall. Private Party follow with a flying double stomp/neckbreaker combo on Jungle Boy. Private Party then attempt stereo flying attacks, but JB dodges. Early hot tag to Luchasaurus, but Private Party run away. Luchsaurus throws The Blade aside, and slams Kassidy onto the apron. Luchasaurus has Quen by the throat, but Matt hits a chair shot. Back from commercials, Andrade El Idolo watches from the stands as Private Party dismantles the leg of Luchasaurus. Kassidy misses a head of steam into the barricade, Hardy throws him in to slow Luchasaurus down as he sludges towards Jungle Boy. Luchasaurus spins Private Party with double clotheslines, and Jungle Boy storms in on the hot tag. Jungle Boy hits a trilogy of dives. Private Party attempt a Doomsday Device, Jungle Boy shifts to Luchasaurus' shoulders and reverses Kassidy with a SPANISH FLY! That spot is worth an extra half star, at least. The match continues to break down as Private Party hits Luchasaurus with Silly String. Jungle Boy arranges a meeting of the minds and applies the Snare Trap on Kassidy, but Quen breaks it with a SSP! Jungle Boy then reverses Gin n Juice into a Destroyer! Jurassic Express finish it with a tandem powerbomb at 10:54! This was a great fun and a real crowd pleaser, full of well executed and innovative spots, ***¾.
Winners and still AEW Tag Team Champions: Jurassic Express

Final Thoughts: This week made a strong case for being Dynamite's third hour and not filler, as we got important chapters in various feuds, Moxley's rebuild, and two title matches. This is an incredibly easy to watch hour of wrestling. Recommended.