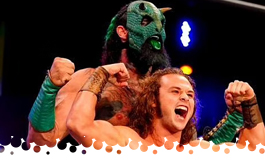 Taped from the PNC Arena in Raleigh, North Carolina. Our hosts are Excalibur, Taz, Ricky Starks, and Chris Jericho.

Adam Cole (with Britt Baker, reDRagon, and The Young Bucks) vs. Trent Beretta (with Best Friends)

Trent swats away a pump kick and delivers some chops. Trent hits an overhead suplex and follows with forearms to the face. Low dropkick by Trent sends Cole outside. The Young Bucks distract with smack talk, and Cole trips Trent back-first onto the ring frame. Cole intelligently goes to work on Trent's surgically repaired neck. Cole tries Panama Sunrise on the floor, but Trent reverses into a back body drop. Trent misses a spear and hits the rails hard. Back from commercials, Trent makes a desperate comeback with more chops. Trent nails a deadlift German suplex! Tornado DDT by Trent gets 2. The crowd is really into this and pops for Trent's superplex. Cole answers with a backstabber. Trent sells the neck and lures Cole into a half n' half suplex. Cole no-sells and hits a brainbuster onto his knee for a hot nearfall. Cole sells a head injury and Trent pulls him into a piledriver on the ring apron! Trent can't go for the cover, and Cole nails a Destroyer for only 2! Trent reverses the Panama Sunrise into a Saito Suplex and then nails a mean lariat. Cole fires away a pair of superkicks, but Trent counters Panama Sunrise into Storm Zero! Cole can't kick out but gets a rope break. Tensions explode at ringside and a huge brawl breaks out. Meanwhile, Cole drops the Boom to win at 11:36. This was a nasty bit of business with neck vs. head attacks, and they kept it interesting by Cole being unable to hit his primary finisher, ***¾.
Winner: Adam Cole

Video package hyping Thunder Rosa vs. Mercedes Martinez. Rosa can't believe Mercedes came to AEW just to expose herself as a cheater. Martinez has no shame and wants to beat some respect into Rosa.

Spears shows off with a cartwheel and the TEN taunt. Everett tries a springboard move but gets caught with C4. Spears casually rests on Everett to pin him at 0:54. Not sure Spears deserves such a dominant squash at this point in his career, but he does have a big match coming up with CM Punk, so I digress.
Winner: Shawn Spears

Spears grabs the mic to ponder if CM Punk is truly the best in the world. Spears traveld the same roads as Punk, and is just as dangerous. He's the guy that MJF sends to do his dirty work and you never see him coming. The fans interrupt with Wardlow chants. Spears lands into it, saying that on Wednesday, Punk won't be in the ring with a “one move wonder” (like Wardlow) but a veteran with years of experience, and Spears will expose him. The Chairman Cometh! Wardlow is a good sport… for now.

Diss track with The Acclaimed. They amusingly cosplay as Darby and Sting and goof around in the sort of abandoned building where their enemies might film their gothic video messages. This was amazing, don't miss it.

Kris and Leyla argue over who starts first, and I'm already tired of this. Hirsch quickly gets cornered, and the ref won't let Kris help. Leyla breaks free, Kris tags herself in and hits Bunny with a waistlock takedown. Bunny fires back with forearms, but Statlander nails a scoop slam. Kris and Velvet hit a double whip and tandem scoop slam onto Bunny for 2. Hirsch botches a leg sweep on Bunny to set her up for Velvet's elbow drop. Leyla won't tag in Kris, so Velvet tags herself in, but gets blindsided by Rose. Back from commercials, Rose destroys Velvet with a chokeslam for 2. Statlander gets the hot tag (no sign of Leyla) and she runs wild through Ford. Eye gouge by Ford, but she misses a cutter, and Kris backslides her into the Spider Crab! Vickie distracts the ref from the submission, and Bunny saves Ford. Bunny gets caught in Statlander's Blue Thunder Bomb but kicks out. Leyla returns to tag herself in, and Bunny shoves her into Kris and rolls her up at 9:08. Match was alright, just wish they were staying away from the CAN THEY GET ALONG trope that's been overplayed in WWE, **.
Winners: Nyla Rose, The Bunny, and Penelope Ford

Dan Lambert and Men of the Year talk to the camera. Scorpio Sky still doesn't understand why he can't get a TNT title shot when it seems like anyone else can, especially with his glistening win/loss record. He wants Cody Rhodes and Sammy Guevara to settle it and he'll take the winner.

Ricky Starks complains on commentary about all the disrespect that Team Taz gets and puts Jay Lethal on notice. This brings out Lethal in the flesh. He spent two months watching Dante Martin mix it up with Team Taz, and it's made him sick to his stomach. Lethal also notices that Starks hardly defends the FTW title, and wants a shot at it just because it means so much to Starks. Lethal doesn't expect an answer, because he knows that Starks has to run everything through Daddy, er, Taz. Them's fighting words, but referees show up before anything can happen. Taz is irate to the point of hilarity.

Mark Henry hosts the split screen confrontation between The Dark Order and Jurassic Express. Alex Reynolds and John Silver are ready (have you SEEN Silver's meat) and they mock Christian Cage with a kazoo song. Christian is glad they are taking this so seriously, because if he could inspire them with a kazoo, imagine what he's doing with talent like Jurassic Express. That's enough talk (and music), it's TIME FOR THE MAIN EVENT!

The crowd is hot while JB locks up with Reynolds. JB gets the better of Reynolds, and tags in Luchasaurus for a chop to the neck. Jurassic Express hit Reynolds with a scoop slam/stalled senton combo for 2. Silver is hungie for a tag and gets one. Silver hits a back body drop and flexes his meat. Silver hits an enziguri on JB, somersault senton on Luchasaurus, and gets into Christian's face. Dark Order are too clever to get caught and hit a tandem dive to send us to break. Back from commercials, Luchasaurus gets the hot tag and cleans house to massive crowd approval. Reynolds saves Silver from a chokeslam, but Luchasaurus adjusts to chokeslam Silver onto Reynolds for a good nearfall. Silver escapes a 2 on 1 situation and sends Luchasaurus out with a low bridge. Jungle Boy blocks a doomsday device, Silver tries a German superplex, but Luchasaurus interrupts, and they have a wildly awesome (and silly) tower of doom! Jericho describes this as “total extinction!” Silver is up and removes Luchasaurus with a shotgun dropkick. The Dark Order swarm JB and nearly win with a jackknife pin. Fans chant “this is awesome!” Jungle Boy hits a big lariat on Reynolds, Luchasaurus sends Silver into JB's rana onto Evil uno! JB hits a Destroy off of Luchasaurus for only 2 on Reynolds! Jurassic Express hit Reynolds with a tandem slam, JB wipes out Silver, and Luchasaurus gets the pinfall at 12:41! This had crazy, fun, nonstop action, and was a rare compelling babyface vs. babyface match, ***¾.
Winners and still AEW Tag Team Champions: Jurassic Express

Final Thoughts: It's hard to sit through a main event like that and not feel good. This episode just breezed by. Recommended.