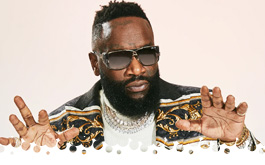 Ricky Starks comes to the ring to talk about his loss to MJF. Even though he lost, Starks can hold his head up high, unlike MJF, who ran away like a coward at the first sign of Bryan Danielson. Starks is ready to work his way towards another title shot and welcomes challengers. He's joined by none other than The Ocho Chris Jericho (with Sammy Guevara and Daniel Garcia). Jericho puts Ricky over as a million dollar talent, but he's not ready to be world champion yet. He still invites Starks to join the JAS. Starks compliments Jericho for constantly reinventing himself, like getting himself into shape again (you were built like an air-fryer) and dressing like a single father on his fifth divorce. Ricky reminds us that Jericho just lost to Action Andretti, so his stock is dropping. Perhaps the "J" in JAS stands for "jobbers." Starks doesn't think Jericho and his JAS-holes have accomplished much lately. Jake Hager and his awesome purple hat sneak attack and the JAS prepare a bat attack. Luckily, Action Andretti runs in and drops Jericho with a springboard clothesline. Andretti and Starks clear the ring and stand tall.

Death Triangle © (Pac, Penta El Zero Miedo, and Rey Fenix, with Alex Abrahantes) vs. The Elite (Kenny Omega, Nick Jackson, and Matt Jackson, with Don Callis, MT Nakazawa, and Brandon Cutler)
No rules, so The Elite try triple powerbombs, but Death Triangle counter with triple superkicks and dives. Abrantes and Cutler are dressed as elves and battle over some Christmas freeze spray. Penta smashes Kenny with a trash can. Death Triangle stomp the can into Kenny's groin and give Matt the BTE Trigger. Nick hobbles through a series of high spots, but Penta stops him with a Sling Blade. Back from commercials, Death Triangle whip Matt into an artificial Christmas tree! Nick assists but accidentally superkicks a chair with his bad ankle. Pac prepares a Pillmanizer for Nick, but Kenny knocks him over with a trash can. Matt moonsaults onto Lucha Bros. Kenny hits the Finlay Roll and then a trash can assisted moonsault onto Pac! Kenny fetches a barbed wire broom and punishes Fenix with a Kotaro Crusher onto the wire! The Bucks put Penta and Pac through tables at ringside. Omega hits Fenix with the wired broom again for a dramatic 2 count. Fans chant "This is awesome!" Omega hits Fenix with a V-Trigger, but Fenix reverses One Winged Angel into a poison rana for a hot nearfall. Fenix smashes Omega with the dreaded hammer, but Omega kicks out! Pac wraps tinsel around Omega for a Brutalizer, Fenix puts Nick into an ankle lock, but Matt fights past Penta to break up the submissions. Death Triangle arm themselves with hammers, but the Bucks clear the ring and hit Fenix with a Meltzer Driver onto a chair to win at 13:44! Good hardcore stunt show. The live crowd enjoyed this a lot more than I did, ***½.
Winners: The Elite

Unaired footage from last week, with MJF ranting about Bryan Danielson attacking him "from behind." MJF was robbed of his moment because Danielson had to stick his sh!tty little hipster nose into his business. MJF's "reign of terror" is just getting started.

Tony Shiavone chats with Action Andretti backstage. He's feeling proud after defeating Chris Jericho against all odds. Andretti isn't a half-bad promo and shows some good babyface fire here. He's interrupted by 2point0, who also think Andretti is on fire, which sets up Jericho ambushing with a fireball from behind. Well, that escalated quickly. I guess Jericho is still a wizard.

Renee Paquette interviews Bryan Danielson in the ring. Bryan earns a cheap pop for reminding us that he trained to wrestle in San Antonio. While Rudy Boy Gonzales and Shawn Michaels were his first teachers, it was William Regal who made him the wrestler he is today. Regal taught him that actions have consequences, which means MJF is in a world of trouble. Instead of MJF, we get Ethan Page (with Stokely Hathaway), and Ethan resents "Vegetable Man" Danielson jumping ahead of him in line for a title shot. Stokely fires off a series of b!tchy insults, but Danielson can't hear him because of Stokely's shiny, bald head. Ethan threatens to turn Bryan into a vegetable, and Bryan thinks he should try it right now. Ethan declines, so Bryan encourages some YES chants from the fans.

Jon Moxley talks to the camera about the $300,000 Trios Battle Royal on Rampage. He'll be there, so Hangman Page will know where to find him. Moxley mocks Page for getting emotional about the concussion. What was Moxley trying to do with that clothesline, comb his hair? Sending Hangman to the hospital means that Moxley is good at his job, so he's the bad guy? This is gold.

"The King of Television" Samoa Joe wishes us all happy holidays from the comfort of his own home. He hopes Wardlow has the merriest of holidays, because he won't be having a Happy New Year when Joe is finished with him.

"Exodus Prime" might be the best jobber name ever. Well, after Action Andretti's win last week, we can't dismiss these job guys too fast anymore, right? Hook doesn't agree with me, and blasts a deep lariat. Red Rum ends it at 1:05. Squash matches like this will keep me hooked.
Winner: Hook

Stokely Hathaway interrupts Hook's celebration on the big screen. Big Bill chokeslams Jungle Boy into a trash can, which isn't supposed to make me chuckle, but here we are.

Moxley is unapologetically aggressive in the early going. Darius hits some ineffective shoulder blocks, so Moxley slaps him across the face. Darius hits a dropkick to force a timeout. Mox throws Darius outside and then tosses him into the barricade. Moxley hits a suplex on the floor. Darius tries to answer with a high spot, but Mox knocks him off the ropes. Darius beats the countout, but Moxley slams him into position for a kneebar. Superplex by Moxley leads to hammer and anvil elbow shots. Darius blocks a Brainbuster, and is able to hold his own in a strikefest. Moxley kicks the previously injured knee and tries to remove his brace, but Darius kicks him in the face. Darius slips while hitting an elaborate Pele Kick, but got enough of it to retain his dignity. Darius rallies and hits a leaping Flatliner for 2. Moxley rolls through Darius' crossbody and stomps his face in. Darius fights out of a Bulldog Choke, but Moxley hits Death Rider to win at 8:52! Well, this wasn't the most exciting or best executed match ever, but it succeeded at sending a message from Moxley, and there were NO COMMERCIALS! **½.
Winner: Jon Moxley

Book of Hobbs video package. As a child, he watched his uncle overdose. He was robbed, beaten, shot at, etc. These events turned Hobbs into a monster and now he's going to be the one spilling blood.

FTR are looking for revenge after the Gunn Club beat them up at ROH Final Battle. FTR are clearly not at 100% after losing to the Briscoes in a brutal dog collar match. Cash punches Colten in the kidneys and hits some atomic drops. Austin charges in and Cash brutalizes him with atomic drops and uppercuts. Cash repeatedly whips Austin into Colten. FTR dominate the fight at ringside to set up commercials. They return with Cash fighting out of the Gunn Club's corner. Dax gets the hot tag and runs wild with clubbing offense. The Gunns block the Sharpshooter, Cash helps with a tope! Austin teases a Sweet Chin Music, but instead does the DX crotch chop, and puts Dax into a Sharpshooter. Cash breaks it up and throws Colten outside, but misses a dive onto the barricade! Dax blocks the Fame-asser, but is too injured to give Austin a piledriver. Austin reverses an O'Connor Roll and grabs Colten's hand to pin Dax at 9:09! Whoa, despite all the circumstances and tomfoolery by the Gunns, the internet will not be happy about this outcome, **½.
Winners: The Gunn Club

Sonjay Dutt drops a diss track against The Acclaimed while Jay Lethal, Jeff Jarrett, and Satnam Singh make mean faces. Something is brewing for Rampage.

Tony Shiavone and hip hop star Rick Ross are here to oversee the meeting between Swerve Strickland and Keith Lee. Ross calls Lee a "big mutha f*cka" and it slips past the TBS censors. I expect to see that on a t-shirt by the weekend. Swerve casually arrives late, he's sick of Lee's accusations. Parker Boudreaux randomly attacks Keith from behind. Ross awkwardly watches while Lee takes out Parker. Lee marches towards Swerve, but a heavily tattooed man ambushes him in the aisle. Parker takes Keith down with a chair shot, and the duo lay him across the steps for Swerve to double stomp a cinder block through his gut. Rick Ross apparently is on board with all of this and hands out matching "Mogul" merch to the crew. This kind of fizzled out with the live crowd, and it looks like we have yet another faction in AEW. The eventual Swerve vs. Lee match should be fire though.

Best Friends and Orange Cassidy talk up the $300,000 Trios battle royal on Rampage. Wow, that's about half of what Mandy Rose earned on her dirty website this week. The Dark Order survivors are also participating, so you know Hangman Page will be lurking.

There's not really a feud between these two, but they trade stiff shots like they caught the other one breaking into their house. Scoop slam by Shida, followed by suplex into the buckles. The fans give them dueling chants while Shida unleashes a running knee strike to the face. Back from commercials, Hayter has gained the advantage and hits a power slam for 2. Shida punches her way back into the fight and hits a dropkick. Missile dropkick by Shida, but Hayter counters with a snapmare onto the apron. Hayter looks for a German to the floor, but Shida reverses into a vertical suplex onto the concrete! Back from MORE commercials, Hayter drops Shida from the top rope, but MISSES a moonsault. Shida hits a devastating knee to the head for only 2! Hayter desperately hits a backbreaker onto her knee, followed by a sliding lariat for only 2! Fans chat "This is awesome" while Hayter hits a Uranage backbreaker for 2. Shida answers with a combination of kick, then a release German suplex! Britt distracts with a kendo stick, Shida takes time to hit a springboard enziguri. Shida blasts Britt with the kendo stick, and then trades reversals with Hayter until taking a powerbomb. The fans give them a standing ovation for that sequence. Hayter hits a pair of lariats to finally win at 16:22! It was daring to give this match the main event spot, but it got OVER. Tremendous outing, ****.
Winner and still AEW Women's Champion: Jamie Hayter

Toni Storms runs in to save Shida from a beatdown, but she also falls to the numbers game. Fortunately, Saraya makes the late save to drop Britt with a thrust kick. I feel like I've been saying this a lot lately: the AEW women's division feels alive.

Final Thoughts: Another good episode of Dynamite that remains focused, is getting each division over, and is following up on important details (ie, Ricky Starks and Action Andretti). I'm happy to say that Dynamite feels like episodic, appointment television again.