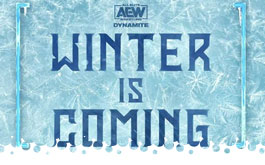 Live from the Curtis Culwell Center in Garland, Texas. Wrestletix estimates attendance at 4,799 fans. Our hosts are Excalibur, Tony Shiavone, and Taz.

Death Triangle © (Pac, Penta El Zero Miedo, and Rey Fenix, with Alex Abrahantes) vs. The Elite (Kenny Omega, Nick Jackson, and Matt Jackson, with Don Callis and Brandon Cutler)
Death Triangle are up 2-1 thus far. The two major ongoing stories here are The Elite's redemption arc, as well as Fenix resisting his teammates' urges to cheat with a hammer. Nick cuts off Penta's taunt and they trade athletic counters until Nick hits a tornado armdrag. Matt tags and enters with a slingshot leg drop. Fenix tags and eats a rana. Pac tags and gets caught in a Kotaro Crusher/facebuster combo. Pac takes a tilt-a-whirl backbreaker and then suffers a double stomp over Omega's knee. Nick hits a dive but seems to tweak his ankle. Omega and Matt swarm Pac while Nick checks on his ankle. Penta cheap shots and allows Fenix to hit a tightrope walk penalty kick. Fenix dives onto Omega while Pac suplexes Matt for 2. Back from commercials, Omega and Matt are going it alone. Matt hits rolling suplexes on Fenix, and meets Penta with a Northern Lights while snapping Rey's legs. Omega gets the hot tag an soars in with a high crossbody. Finlay Roll and Moonsault by Omega get 2. Crowd chants "Kenny!" Omega signals a dive, but Pac trips him up for a slingshot cutter. Pump kick by Pac, but Omega answers with a running back elbow. Pac blocks a German, but Omega improvises with a Brainbuster! Kenny looks for a tag, but Penta gives Matt Fear Factor on the ring frame. Fenix hits the Spanish Fly on Omega, Penta hits Made in Japan, and Fenix nails an inverted frog splash, but OMEGA KICKS OUT! Omega dodges the Black Arrow just as Nick limps back to the apron. Nick gets the hot tag and runs wild with basic punching. Nick counters Rey's springboard attack with a cutter. Penta smashes the dreaded hammer over Nick's bad ankle! Fenix capitalizes with a knee bar and Nick taps at 14:56! This was terrifically different from the previous matches, combining their usual high spots with a well delivered injury storyline, ***¾.
Winners: Death Triangle


Kenny Omega gets on the mic. Since Death Triangle keep using a hammer to win, why not make the next match No Disqualifications?

Alex Marvez asks AEW World Champion MJF for his thoughts about Ricky Starks. MJF thinks it's cute that Starks thinks his promo last week was a star-making performance. MJF was already a star when he arrived in AEW. MJF takes credit for giving Ricky the rub. He mocks Ricky's tough upbringing and gloats about being born with a silver spoon in his mouth. MJF isn't one to be upstaged and he really delivered here.

AEW Tag Team Champions The Acclaimed (with Daddy Ass Billy Gunn) come to the ring for their weekly rap, but they're jumped by Jeff Jarrett, Jay Lethal, Satnam Singh, and Sonjay Dutt. The fans are upset about missing the full rap and give Jarrett the heat he's been looking for. Jarrett smashes his guitar over Max Caster. Jarrett gloats that he now has The Acclaimed's attention, so they can "Scissor this, Slapnuts." Based on the crowd, this feud might have some legs after all.

Footage of Claudio Castagnoli defeating Chris Jericho for the ROH title by making him submit to the giant swing. Cut to Tony Shiavone with the JAS. Jericho isn't taking the loss well and rants about the giant swing being a "barbaric" move. He insists that he's still The Ocho and plans on beating up some jobber to get ready for his rematch. Jericho orders Daniel Garcia to shadow his "elder" Sammy Guevara so he can learn how not to be such a loser. Jake Hager likes his hat. Cute segment that sets up something new for Garcia.

Perry is selling a bad neck, after getting chokeslammed onto the apron by Big Bill (formerly W. Morrissey). Bell rings, Jack looks for an armdrag, but Cage counters into a shoulder tackle. Cage tries a DVD but Perry counters with a head scissors takedown and then hits a flying rana. Cage fires back with power offense and hits a deadlift suplex over the ropes. Cage uses Jack as a weight and then hits a fallaway slam. Back from commercials, Jack uses his quickness to mount a comeback. Cage absorbs a lariat, but Perry counters with a DDT. Cage answers with a release German suplex, and then a Full Nelson driver for only 2. Perry blocks the Drill Claw but Cage nails a discus clothesline. Perry reverses with a Canadian Destroyer but Cage kicks out. Perry applies the Snare Trap, but Prince Nana distracts the ref from the submission. Cage inadvertently hits Nana with his lariat, and Perry capitalizes with the pinfall at 8:15. They got clever with the reversals, raising this above your usual formulaic TV match, ***.
Winner: Jack Perry

Perry is feeling confident after beating Luchasaurus and Brian Cage, so he wants the biggest b!tch of them all, Big Bill, right now! Stokely Hathaway answers the call and threatens to slap Perry for being a little h0. Lee Moriarty rushes in to distract Perry from Big Bill's arrival. Big Bill gives Perry a big time Chokeslam in the ring. Hook marches in (to a big pop) to chase The Firm away. Hook extends a hand to Perry, and it looks like they're teaming up to take on common enemies.

The Blackpool Combat Club talk to the camera. Jon Moxley thinks people have been confused about the group lately, but all we need to know is that Wheeler Yuta and Claudio Castagnoli won championships in convincing fashion at Final Battle. Even though they promised to be finished feuding with the JAS, Moxley would like to stomp in Sammy Guevara's face on Rampage.

Swerve in Our Glory video package. They won at Final Battle, but things are still not even steven between them. Swerve wants a meeting with Keith Lee next week to figure things out.

The House of Black (Malakai Black, Buddy Matthews, and Brody King, with Julia Hart) vs. The Factory (Cole Karter, Aaron Solo, and Nick Comoroto, with QT Marshall and Jora Johl)

Comoroto throws his toothpick at Julia, so she sprays black mist into his eyes. The HoB clear the ring and dominate The Factory at ringside. QT stupidly walks into the Black Mass and gets pinned at like 0:05. Functional heater for the HoB.
Winners: The House of Black

Video package building up Jamie Hayter vs. Hikaru Shida for the Women's Championship.

Renee Paquette is standing by with Dr. Britt Baker and Rebel. Britt is more than happy to trash talk Shida again for old time's sake. Skye Blue interrupts because she's sick of Britt's talking, so they'll fight on Rampage.

Jericho enjoys the fans singing along to "Judas" but then flips them off anyway. Jericho slaps Andretti, but Andretti slaps back. Jericho turns up the aggression and dominates with tight corner attacks. Andretti manages a couple of chops, but Jericho continues tearing him apart. Andretti hits a rana and springboard spinning leg drop for 1. Jericho hits a Death Valley Driver while fans chant "Let's go, jobber!" Andretti kicks out of the Codebreaker to survive the first segment so we're off to commercials. They return with Jericho looking frustrated while the fans sing along their support of Andretti. Desperation chops by Andretti, but Jericho pokes his eyes. Andretti rallies and hits a backbreaker/neckbreaker combo! Andretti's split legged moonsault is blocked! Andretti ducks the Judas Effect and gets a roll-up for 2. Enziguri by Andretti, and then a split legged moonsault to outside! Crowd chants "holy sh!t!" Andretti springboards into the Walls, but Andretti blocks. Modified crucifix slam by Andretti, and then a running SSP, and ANDRETTI PINS JERICHO at 9:40! Holy upset! This guy I've never heard of walks right into AEW and pins Chris Jericho with a hot crowd going nuts. They must really see something in Andretti, it's hard to imagine that he's not signed, ***¼.
Winner: Action Andretti

Ricky Starks talks to the camera. He projects confidence and is ready for his shot against "Maxi Pad." Starks has paid his dues and overcome a broken neck, and his time is now.

Video promo with FTR, fresh from losing the ROH Tag titles to the Briscoes at Final Battle. They're moving on to focus on The Gunn Club, who keep getting into their business.

Tay meets Ruby with a pump kick on the apron. Ruby whips Tay into the guard rails. Tay hammers on Ruby's shoulder and whips her into the rails and ring steps. They finally enter the ring and Ruby scores a series of suplexes. Tay blocks No Future and retreats to ringside. Ruby follows, but Tay hits a hammerlock DDT on the ramp. Back from commercials, Ruby angrily unloads punches to the face. Ruby hits some running boots and then bashes Tay's face against the buckles. Ruby misses a senton and Tay capitalizes with a pump kick to the face for 2. They trade chops until Tay hits a Judo throw and Gotch piledriver, but Ruby kicks out! Ruby targets the nose and hits No Future to win at 7:23. Good showing from Tay, who was looking like she did a year and half or so ago when she was being discussed as a Most Improved performer. Ruby seems to be getting her working legs back under here, and kept things pretty basic, **½.
Winner: Ruby Soho

Anna Jay power walks in to attack Ruby from behind. Ruby sells like her nose might be broken again.

Alex Marvez wants a health update from Hangman Adam Page, who is frustrated because he's still suffering migraines and other symptoms from his concussion. Page isn't cleared to wrestle, and resents Moxley calling him out. Page emotionally reveals that his head injury was so bad, he actually forgot his own son's name for an entire hour.

Orange Cassidy, Dustin Rhodes, and Best Friends talk to the camera. They're united to flatten Trent Seven and his friends on Rampage.

MJF starts with a near low blow and confidently scores the next few shots, and finds time to strut. Starks runs the ropes and shoulder tackles MJF through the ropes. MJF pouts in the crowd and returns only to find Starks ready to pounce. MJF hides in the ropes and sneakily thumbs the eyes. MJF goes to work on Starks previously injured ribs. Back from commercials, MJF uses the ropes for leverage in an abdominal stretch. The ref catches on, and Starks surprises with a hip toss and desperation lariat! Starks rallies with quick running attacks and hits a tornado DDT! MJF blocks Roshambo, so Starks hits a Liger Bomb for 2! They trade rapid counters until MJF hits a brutal powerbomb onto his knee. They engage in an aggressive brawl until Starks hits a spear. MJF reverses the cover into Salt of the Earth! Starks dramatically gets the ropes! They aggressively chain wrestle until Starks hits a thrust kick. MJF blocks Roshambo, hides behind the ref, and hits a sneaky low blow to win at 15:50! Strong, mat-based match. The red hot crowd helped A LOT, ***¾.
Winner and still AEW World Champion: MJF

MJF thinks his night is over, but Bryan Danielson arrives to chase him into the crowd. Bryan helps Starks to his feet and puts over his effort.

Final Thoughts: Good episode that continues the recent trend of AEW's creative feeling much more focused. It's becoming easier to see the threads connecting one episode to the next. My biggest concerns are mostly around talent that disappear, like we haven't heard from Preston Vance since he turned on The Dark Order. That's a big-picture worry that doesn't impact my opinion of Winter is Coming as its own show.