Live from the Gas South Arena in Duluth, Georgia. Our hosts are Tony Shiavone and Excalibur. Jim Ross is taking a leave to battle skin cancer (get well, J.R.!).

Bryan Danielson vs. Alan Angels (with The Dark Order)

The live crowd still likes Bryan and gives him a hero's welcome and YES chants. Luckily, Angels is from Atlanta, so the crowd likes him even more. Bell rings, Bryan goes right for a half crab, and now the fans let him have it with boos. Angels unloads a flurry of stiff shots. A grumpy Bryan answers with a tight uppercut. Bryan dominates and hits his running corner dropkick. Angels tries a backslide pin but Bryan counters with a butterfly suplex. Angels throws Bryan out for a tope suicida and top rope moonsault. Spanish Fly by Angels gets 2! Bryan dodges a moonsault and pops up for his patented running knee. Bryan looks at Hangman while trapping Angels' arms and stomping his head in. Bryan applies a kneebar for an instant submission at 6:11! Good showing for Angels in front of his hometown fans, but another dominant win by Bryan, **½.
Winner: Bryan Danielson

Tony Shiavone reveals that Bryan will get his shot at Hangman in 2 weeks at Winter is Coming and comments that Bryan looks ready. Bryan scoffs that Angels is the best Atlanta has got and he whooped his @ss. He's looking forward to beating up one more Dark Order guy in Long Island, and then he'll become champion in the home of the Cowboys, prove that Hangman is a one hit wonder, and expose him for being "cowboy sh!t." Hangman is ready for a fight, but John Silver steps in to chase Bryan out. Bryan reveals that Tony Khan ordered him and Hangman not to touch today, and that's fine with Bryan because these Atlanta jerks don't deserve to see it. Bryan's mic work continues to entertain, but this segment got messy from a narrative standpoint.

Miro video promo. He appears to be stuck in a blank purgatory setting. He claims to have heard the word of his God, which probably means bad things for the AEW roster.

MJF joins commentary to keep an eye on Punk. MJF thinks Punk has been binge drinking all week since barely beating QT Marshall. Excalibur explains that Punk was suffering from a non-COVID condition. Punk and Lee trade holds while MJF promotes the Dynamite Diamond Battle Royal for next week. Lee scores some arm drags, so Punk thrusts him into the buckles. Leg lariat by Punk, and then a diving clothesline. Back from commercials, Moriarty is in control, and MJF makes the argument that PG Punk has gone soft. Moriarty hits a mean Saito suplex for 2. Moriarty rolls through Punk's crossbody and applies a crossface. Punk tries a super rana, but Moriarty rolls through again, and they trade pinning predicaments. Punk blasts a roundhouse kick, but looks shaken. Moriarty reverses a twisting lariat, nails a penalty kick, and Michinoku Driver for 2! Punk muscles out a GTS for the win at 10:24. Really good stuff with Punk needing to dig deeper than he expected to put Moriarty away, but would have been better served without the context that QT lasted 11 minutes with Punk last week, ***.
Winner: CM Punk

MJF grabs a mic and mockingly tells Punk he's proud of him for struggling to defeat lower card guys. The only thing Punk is "Best in the World" at now is trying to get into Britt Baker's pants. MJF has gone full Twitter troll with these insults. Punk thinks MJF has a lot of nerve talking about pants since he appears to be wearing Larry David's pajamas. He asks MJF to bring his needle d!ck to the ring for a fight, but MJF refuses to be the spark to a flame that Punk hasn't had since 2011. MJF invites Punk to watch him win the Dynamite Diamond Battle Royal in the most magical place in the world, Long Island, where he thinks he's going to be the popular hometown heel. MJF threatens Punk's dog, Larry, which finally triggers Punk to storm the stage, but Wardlow steps in as a shield. 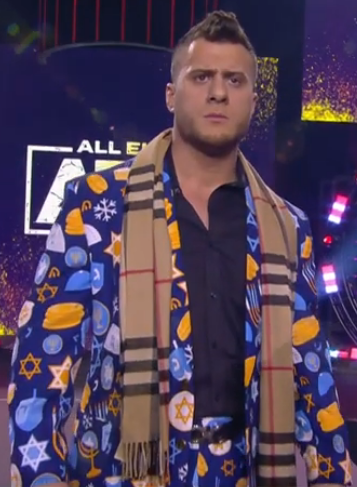 Tony Shiavone interviews an upset AEW Women's Champion Britt Baker (with Rebel and Jamie Hayter) who is disgusted after losing to Riho. Britt cheers herself up by announcing that Hayter will slaughter Riho on her behalf.

Adam Cole, who gets an awfully big ovation for a guy that Twitter has informed me has become a lesser star in AEW, joins commentary. Cole is quick to bicker with Tony, but gets distracted when Orange Cassidy meanders out for a confrontation. The Young Bucks sneak out, but Cassidy was expecting them, and gives out sloth kicks. Sadly, this gives Cole a chance to uppercut his groin. The Bucks mockingly give sloth superkicks before throwing proper superkicks. The trio prepares a BTE Trigger, but Best Friends finally arrives with chairs to save their buddy.

Tony Nese talks to the camera about how Sammy Guevara doesn't deserve to be TNT Champion. He's going to destroy Sammy's ribs and take the title on Rampage.

The jobber slaps Wardlow's chest and then eats a clothesline. Wardlow takes his time hitting several powerbombs for the win at 1:30. Spears unloads chair shots on Adams for good measure. This was a functional squash match.
Winner: Wardlow

Tony Shiavone interviews Penta and Pac backstage ahead of their match with FTR on Rampage. Pac is wearing an eye patch as a result of Malakai Black's mist, but he isn't scared.

The Gunn Club (Billy and Colten, with Austin) vs. Darby Allin and Sting

This is Sting's first match in Atlanta in 14 years. Well, Duluth is close enough. Taz is taking a turn on commentary. Darby starts against Colten, but takes a shoulder block. Darby trips Colten and hits an armdrag and shotgun dropkick. Papa Billy tags in, so Darby gives him Sting. Sting dishes out a round of punches and an atomic drop. Billy slips out to avoid the Stinger Splash. Billy orders Colten into the ring. Colten reverses the Coffin Drop into a nasty power slam. The Gunn Club work Darby over in their corner to send us to commercials. They return with Darby stuck in Colten's Scorpion Deathlock. Darby survives and shoves Colten into Billy. Sting gets the hot tag and cleans house with clotheslines and Stinger Splashes. Sting hits Colten with a spinebuster and puts him into a real Scorpion Deathlock. Austin sneaks in to save Colten, so Darby kills him with a tope. Billy sneaks in for a Fame-asser on Sting, but Colten's cover gets 2! Darby wipes Billy out with a tope and gives Colten a stunner. Sting finishes Colten with the Scorpion Death Drop at 10:06, ending the Gunn Club's undefeated streak. Not a great match or anything, but cool for sentimental reasons, **½.
Winners: Sting and Darby Allin

Lio Rush comes out to talk to Team Taz on commentary. Rush takes exception with Taz' calculation that there's a 125% chance that a Team Taz guy wins the Dynamite Diamond Battle Royal. Rush will be in that match and will keep fighting even if he has a 1% chance of winning. Taz thinks Rush should just retire again. They trot Dante Martin out to gloat about abandoning Rush and that's a wrap.

Mark Sterling and Jade Cargill talk to the camera. Jade is the uncrowned rookie of the year and will be facing one of Thunder Rosa's students on Rampage. Rosa says she'll be commentating that match, so Jade better watch her back.

The fans give them a dueling chant while they lock up. They reach a stalemate when Ruby stops herself from using a closed fist. They reach another stalemate when Kris stops herself from hitting a penalty kick to the face, instead opting to boop Ruby's nose. Mind games are fun. Ruby tries a monkey flip, but Kris hand stands her way to safety. Flatliner by Ruby gets 2. Back from commercials, Ruby hits a STO and flying senton for 2. Kris blocks a suplex and nails a Blue Thunder Bomb for a good nearfall. Kris applies the Spider Crab and dead lifts Ruby for a buckle bomb! Another BTB gives Kris a convincing nearfall. Ruby makes a scrappy comeback and maneuvers into a poison rana! Ruby hits a low rana for a hot nearfall that pops the crowd. They trade finisher reversals, and Ruby scores a rollup victory at 10:30! This tournament rules, ***½.
Winner: Ruby Soho

Vickie Guerrero shows up to yell at Statlander while Nyla Rose sneaks into the ring to attack Ruby. Kris rushes back to spare Ruby any real damage while Nyla slips away.

Uh oh, Atlanta hates Cody now too. Andrade rushes Cody on the stage and they brawl down the ramp. Meanwhile, Arn gets his shots in on poor Jose. Cody and Andrade head into the crowd and throw trash at each other. There's a "Cody" chant, which wills him to moonsault off a rail. Back to ringside, Andrade overturns the ring steps and drops Cody onto the sharp part! Cody knocks Andrade into the post and takes a break to visit T-Pain, who offers up a chair. Couldn't we all use a friend like T-Pain? Cody smashes Andrade with the chair and they finally enter the ring, where boos drown out any love for Cody. Andrade hits a low blow and whips Cody with his own weight belt. Andrade smashes a Chromebook over Cody's face. Fans chant "We want tables" and Andrade makes it clear he won't take their orders. Instead, Andrade piles a chair on Cody and hits a split legged moonsault! A defiant Cody hits a low blow, but Andrade desperately tosses him, setting up some commercials. They return with Cody blocking a moonsault by flinging a chair! It looked botched live, but the replay showed it was perfectly timed and executed. Cody wraps a chain around his fist for a punch to the face! Cody's tope is blocked with a chair shot. Andrade rips up some floor padding but takes a backdrop onto the floor! Cody considers using a sledgehammer, but instead opts for a golden shovel. I guess, it's time to "bury some talent." Cody shakes off a run-in by Jose, but Andrade blindsides him with a high crossbody. Andrade props a chair against Cody's face and hits running knees. Cody kicks out! Andrade leans a table in the ropes and puts Cody through it with a hip toss! Andrade sets Cody on a new table, but gets tripped on the ropes. Brandi Rhodes sneaks in and sets the table on fire! Cody hits a reverse DDT through the flaming table! Cody took the worst of the bump, and makes the cover despite being on fire and wins at 19:16! Do we love Cody again? This was an awesome brawl with a shocking finish, ****¼.
Winner: Cody Rhodes 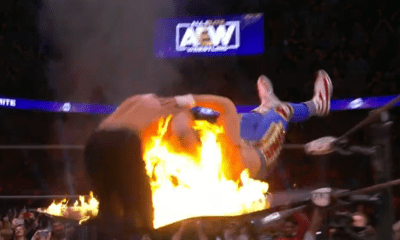 Final Thoughts: This Dynamite did a very good job setting up big events in Long Island and Texas, while also delivering a great main event that came out of nowhere. That was easily Andrade's best AEW performance to date, and the best Cody match in ages. I never really know what to expect from AEW, and I'm usually rewarded for tuning in.