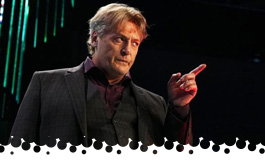 Live from Chicago, Illinois. Our hosts are Tony Shiavone, Excalibur, and Taz.

Show opens with William Regal standing in the ring. He appears defiant after helping MJF win the AEW title at Full Gear. Jon Moxley storms through the fans and looks ready to tear Regal to pieces, but Bryan Danielson rushes in to act as a human shield. Bryan pleads with Moxley to spare Regal, who could get seriously hurt if attacked. Bryan admits that Regal did a bad thing at Full Gear, but he and Moxley have done bad things at times in their careers. Danielson loves Regal because he taught him how to love his own troubled father. Moxley takes this to heart, and maintains his temper, but still gives Regal a no-BS warning to run away and stay far away from him. This was an outstanding piece of business, with Danielson, Regal, and Moxley acting like human beings rather than cartoonish one dimensional heels or babyfaces. It is no easy feat to pull off a segment with so much nuanced, mixed emotions and motivations, but they knocked it out of the park.

Renee Paquette asks Keith Lee about what's next, now that he seemingly split up with Swerve Strickland at Full Gear. Lee looks miserable over the development, and an equally unhappy looking Swerve interrupts. Swerve covers the camera with his hand, as their discussion needs to happen in private. Maybe it's wishful thinking on my part, but so far, the two segments on this episode feel like way more thought than usual went into putting them together.

A fan sign in the crowd proves that I'm not the only fan of Hager's awesome, purple bucket hat. Hager puts on OC's shades and slaps away his knuckle locks. Cassidy puts his hands in pockets and hits a dropkick, but Hager answers with a mean clothesline. Cassidy grabs Hager's head and plays keep-away with 2point0, but Daniel Garcia snatches it back. Cassidy dives into Hager's powerslams into furniture, and Hager triumphantly regains possession of the bucket hat. Back from commercials, Hager knocks Cassidy into a trust fall onto Best Friends. Hager plows through Best Friends, prompting OC to hit a tope. Cassidy hits a springboard somersault senton onto the JAS. Hager catches OC in mid-air, but eats a Stundog Millionaire and tornado DDT for 2. Hager blocks the Orange Punch and nails a Uranage for 2. Hager puts on his hat, but OC blocks the Hager Bomb. Hager goes for an ankle lock instead, OC rips off the hat again and hits the Orange Punch. Cassidy's victory roll ends it at 8:38. Feel-good Thanksgiving Thumpin' fun, ***.
Winner and still AEW All-Atlantic Champion: Orange Cassidy

Best Friends' group hug is rudely interrupted by QT Marshall and The Factory. It looks like trouble but then the lights go out Julia Hart appears on the stage dressed like a lady Undertaker. The House of Black, having failed to get their AEW releases, appear in the ring for a beatdown on Best Friends. The Factory thinks this is funny, except then they get beaten up too. Good reset for the House of Black.

Video promo with Jungle Boy Jack Perry, fresh from defeating Luchasaurus in a cage match at Full Gear. He's glad to have won and kicked his former friend's @ss.

Page promises to make Starks and the fans cry like losers. Starks is covered in bandages after recent dealings against Lance Archer. Starks has to work extra hard to compete in a punchfest and loses his temper. Ethan answers with shoulder thrusts to the bandaged ribs. Starks is hurting but hits a desperation spear. Back from commercials, Starks reverses a hard Irish whip, but Ethan hangs him up on the ropes. Starks laboriously goes for a dive, but Stokely pushes Ethan out of harm's way. Stokely gets ejected. They battle on the top rope until Starks nail a superplex that leaves them both down. Swinging neckbreaker by Starks, then a spinning DDT gets 2. Ethan answers with a slick power slam. Starks blocks the Ego's Edge, and finishes with a pair of spears at 13:00. Good story-driven match, the kind of match that AEW's detractors pretend they don't have, ***.
Winner: Ricky Starks

Footage of Jade Cargill getting into an altercation with Bow Wow. Renee Paquette wants to know what's going on, Jade has no comment for her. She's happy to have her TBS title back on her shoulder and Red Velvet back at her side. Jade and friends are ready to party, but first Mark Sterling fires Keira Hogan from the group for failing to live up their standards as a Baddie.

The partisan Chicago crowd boos the Elite during their entrance. Death Triangle are 1-0 after winning at Full Gear. Omega shakes Fenix' hand and then nails a V-Trigger. Matt Jackson gives Pac a powerbomb onto the apron. Omega hits Fenix with a sky-high powerbomb for 2. Meanwhile, Penta hits Matt with SlingBlade, but gets ambushed by Nick Jackson's dive off the apron. Everyone gathers for a seemingly over telegraphed dive, but instead Fenix rushes in to take Omega down and hit his own corkscrew senton instead. The fans entertain themselves with soccer chants while Death Triangle swarm Omega 3 on 1. The Bucks break it up, Matt hits a moonsault onto Lucha Bros outside. The Elite antagonize the crowd while working Pac over with quick tags. Back from commercials, Omega takes a bite out of Pac's arm, Pac answers with a lightning German suplex. Penta hot tags in and dives onto the Bucks. Penta serves up extra helpings of backbreakers. Fenix hits Nick with a springboard rana, but he and Matt go down with stereo superkicks. Fans chant “This is awesome” while Omega and Pac duke it out. Snap dragon by Omega. The Bucks rip off Pac's protective mask for the BTE Trigger, but Lucha Bros break the pin. Nick dives onto the Lucha Bros, leaving Pac behind for Omega's V-Trigger! Pac blocks One Winged Angel, so Omega hits a Go To Sleep instead! THAT'S going to raise some eyebrows. Fenix walks the ropes to knock down the Bucks and Penta helps with a somersault dive. In the chaos, Matt low blows Pac and gets a hammer from Brandon Cutler. Penta also has a hammer and knocks Matt out, and Pac gets the pin at 14:52. Maybe the Lucha Bros should change their names to the Hammer Bros, amirite? This was the typical high-octane spotfest you'd expect from these guys, I'll admit the cartoon finish made me chuckle, ****¼.
Winners: Death Triangle

Renee Paquette announces that Thunder Rosa has relinquished the AEW Women's Championship, therefore Jamie Hayter is no longer an interim champion. Hayter, Rebel, and Britt Baker join Renee on the stage. Britt hogs the spotlight by grabbing the mic out of Jamie's hands and making the segment all about her.

The fans are behind Hayter as she locks up with Tay. Hayter reverses a suplex onto Anna and Tay, and then suplexes Tay for 2. Britt tags and hits Tay with Sling Blade. Anna and Tay give Britt a double suplex. Willow enters the match to pile Anna and Tay for a corner splash. Willow slams Skye onto Anna for 2. Tay distracts Willow and whips her into the rails. Back from commercials, Blue is running wild on a hot tag. Hayter interrupts a cover, and the match breaks down with drive-by attacks until Britt throws Skye into the Hayter-Breaker. Britt then easily finishes Skye with the Curb Stomp at 8:05. Decent match that served to establish the new status quo between Britt and Jamie now that Hayter is the champion, **½.
Winners: Jamie Hayter and Britt Baker

Renee Paquette hosts Top Flight and FTR backstage. Both teams are impressed with each other, so they respectfully set up a ROH Tag Team Championship match for Rampage.

AEW Tag Team Champions The Acclaimed (with Daddy Ass Billy Gunn) come to the ring to earn more crowd adoration with some rapping and scissoring. Jay Lethal, Sonjay Dutt, and Satnam Singh interrupt on the big screen. They're not happy that Max Caster dropped Jeff Jarrett's name in his rap. Jarrett warns them to watch their backs. Billy ironically wants Jarrett's “old ass” off the screen, and they proceed with the scissoring festivities. It's a Thanksgiving miracle!

Jericho happily flips off Ishii and the fans. They trade hard slaps to the face. Ishii snapmares Jericho down for a kick to the spine. They trade forearms until Ishii scores a takedown. They block finishers and restart with a lockup. Ishii hits a shoulder tackle, Jericho gets up for another slapfest. They trade chops straight into a commercial break. They return with the chopfest continuing, and Jericho is bleeding profusely from his chest. They continue trying to one-up each other with stiff offense. Ishii blocks Jericho's springboard dropkick with a mean lariat. Jericho answers with a spike DDT on the ring frame! Ishii sells exhaustion but still hits a German suplex. Jericho pops up to answer the German, Ishii collapses, Jericho hits the Lionsault for a good nearfall. Codebreaker, but Ishii kicks out! Ishii blocks the Judas Effect and nails a headbutt. Sliding lariat by Ishii gets 2. Jericho tries the Walls, but Ishii steals the Codebreaker! Charging lariat by Ishii, but Jericho kicks out! Jericho reverses an enziguri into the Walls. Ishii nearly escapes, but Jericho improvises with a Liontamer to win at 15:28! Awesome finish to a nasty fight, ***½.
Winner and still ROH World Champion: Chris Jericho

Jericho finds ROH commentator Ian Riccaboni and gets ready for trouble, but Claudio Castagnoli knocks him out from behind.

Final Thoughts: Really strong post-PPV show. I still really enjoy AEW, but the product has been scatterbrained for most of the year, and tonight's show had signs that the booking might be tightening again.