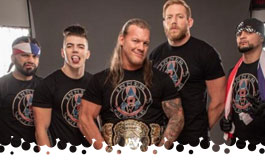 From Bojangles' Coliseum in Charlotte, North Carolina. This is another small arena that looks sold out, which continues to warm my bitter old heart. Our hosts are Jim Ross, Excalibur, and Tony Shiavone.

"The Bastard" Pac vs. Trent Baretta (with Chuck Taylor and Orange Cassidy)

They lock up and wrestle to a quick stalemate. Pac doesn't like the fans' chanting, and tries to punk out Orange at ringside, which is obviously a lost cause. Trent capitalizes with knife edge chops. Trent counters Pac's springboard with a modified Northern Lights suplex. Pac no-sells the damage and drives Trent into the guard rail. Pac drops Trent on the steel ramp and tries to win via countout but decides to keep going with a high arching dive. Missile dropkick by Pac only gets 1! Pac's hard Irish whip sets up a German suplex for 2. We get a rare rest hold in AEW, as Pac applies a chinlock. Trent escapes, but Pac snaps him into the top rope. Orange Cassidy, hands in pocket, enters the ring for a distraction. Cassidy hits some sarcastic kicks, so Pac kicks him square in the face. Trent returns with desperation clotheslines and a half nelson suplex! Trent's somersault senton dive is good! Pac reverses an Irish whip into the barricade, but Trent bounces back with a spear! Trent's nasty knee to the back of the head gets a great nearfall! Hard lariat by Trent and a swinging DDT, but PAC KICKS OUT! Fans chant "Let's go, Trent!" Pac surprises with a brainbuster at ringside! Trent is nice enough to drape himself into position for the Black Arrow for a (possibly botched) nearfall. Pac angrily applies a modified crossface for the win at 11:44. Good story here with Trent scratching and clawing to hang with Pac, ***½.
Winner: Pac

Pac cuts a short promo vowing to make an example out of Hangman Page at Full Gear.

Tony Shiavone interviews Cody in the ring. Cody gets a thunderous hometown ovation from the live crowd. The fans loudly chant "AEW" as he puts over the magnitude of his World title match against Chris Jericho at Full Gear. Cody continues to rile up the crowd by putting over how proud he is of AEW, including the schedule, pay, and freedom the company offers. "This is the Ellis Island for professional wrestlers!" Cody is interrupted by a loud "You deserve it" chant. Cody announces that if he does not defeat Chris Jericho at Full Gear, he will never challenge for the AEW World Championship again. Whoa, that's a bombshell of a stipulation. Cody is mad about being called a millennial bitch, and says he missed the part in Jericho's autobiography (that you can buy on Amazon for 3 dollars!) where he had it so hard being brought up as the upper class son of a famous hockey player, "you stupid dick!" Cody's gets so emotional that his voice cracks, he's on the verge of tears, and the crowd is totally with him. This was a world class passionate promo and they deserve to sell some extra PPV buys because of it.

The Dark Order (Evil Uno and Stu Grayson, with the creepers) vs. Private Party (Isiah Kassidy and Marq Quen)

There's actually bronze medals on the line here, coming out of the tag team title tournament. That's cute. Dark Order try to double team Quen early on, but he hits Grayson with an atomic drop to serve him up for Kassidy's enziguri and leaping double stomp. Match restarts with Kassidy avoiding Grayson's cheap shot but ends up eating an uranage anyway. Kassidy blocks a double team slam and hits another enziguri, but Grayson slams him onto the apron for a slingshot senton! CUE THE COMMERCIAL! They're back and Kassidy is still getting worked over. He reverses a suplex on Evil Uno and the crowd pops for Quen's hot tag, but he stupidly runs into Uno's lariat. Dark Order hit a combination sidewalk slam, but Quen kicks out. Quen blocks Fatality and dropkicks Stu off the apron. Quen's moonsault on Uno is good, and he wipes the Dark Order out with a dive. Springboard crossbody by Quen gets 2. Grayson blocks a double team and catches Private Party with Pele kicks. Sick neckbreaker by Uno. Dark Order swarm Quen and toss him onto Kassidy. Dark Order's combination 450 splash/cannonball is good, but QUEN KICKS OUT! Quen counters with a rana, but Kassidy tags and springboards into a counter. Private Party avoid Fatality yet again, and they finish Grayson with Gin and Juice at 11:44! I was scared they were actually going to job Private Party, so those nearfalls meant a lot to me. It felt like they were working really hard not to botch anything in the late going, but they held it together and provided an exciting finale, ***½.
Winners: Private Party

The Inner Circle air a parody video package of Cody's promo from a few weeks ago. Somber music plays and talking heads, including his aunt's friend from church and VIRGIL, make ironic points. Crowd thinks this is all very amusing. Hager has nothing to say. Guevara says Jericho is the youngest AEW Champ in history. Jericho says it's hard waking up every morning being as great as he is. It's hard finding the best places to go for a bit of the bubbly, but it's something he's just got to face, because he is the Le Champion. This was an EXCELLENT troll job.

Sakura is cosplaying as Freddie Mercury because... why not? Sakura shows off her meanness by throwing Riho around by the hair. Hayter interferes with a leg sweep, but Riho rebounds with a knee strike to Sakura. Shanna tags and hits a wild phantom uppercut to the face. Shanna's running knee to the face gets a 1 count, and her neckbreaker gets 2. Shanna slams Riho onto Sakura for another 2 count. Sakura rakes the back, but Riho's drop toe hold sets up the 619, but Sakura counters into a double underhook backbreaker. Hayter tags and crushes Riho with suplexes. The match continues through a commercial on a split screen. Back from break, and Riho hits a desperate head scissors on Hayter. Riho rolls Sakura into a double stomp to the gut. Shanna gets the hot tag and runs wild until Hayter counters with a backbreaker. Sakura's Vader Bomb is blocked. Hayter wrenches Riho off the apron to prevent a tag. Shanna catches Sakura with a rana and follows with a top rope crossbody to ringside! Fans chant "This is awesome." Shanna hits Sliced Bread and a double underhook slam but SAKURA KICKS OUT. Sakura counters with a Flatliner. Hayter's knee to the face gets 2 on Shanna. Hayter's Falcon Arrow also gets 2. Hayter continues to overwhelm Shanna and tosses Riho. Sakura's Vader Bomb is good, but Riho breaks the pin with a diving double stomp! Riho misses a running knee and Sakura gets a scary close nearfall. Sakura reverses a pinning predicament and steals the win at 13:45! This was a complete balls-to-the-wall barn burner after the commercial, ***½.
Winners: Emi Sakura and Jamie Hayter

Brandi Rhodes cuts an ominous promo while holding a glass of wine and lounging on an armchair. Brandi is sick of all the grief she's been getting, and wants to know who the real bullies are. Images of Awesome Kong are spliced in throughout. This was far less cringeworthy than whatever last week's Brandi's video was supposed to be, but I still have major reservations about the wife of the beloved babyface hero, Cody, acting as an all powerful villain in the women's division.

The fans chant for Tully while the competitors exchange wristlocks. Spears does the 10 gesture, prompting Cutler to go on a hot streak, complete with a leaping kick over the ropes. Guillotine leg drop by Cutler is easily the coolest thing he's done so far in AEW. Spears trips Culter up on the apron and throws him into the barricade. They trade hard strikes in the ring, and Cutler misses a top rope move, allowing Spears' running thrust kick. Spears' Death Valley Driver finishes at 3:15. Perfectly acceptable short match.
Winner: Shawn Spears

Spears prepares to slam Cutler onto a blood stained chair when Joey Janela runs in to chase him off. I guess Janela is still upset about the time Spears tried to rip his tongue out with pliers.

Video package for Jon Moxley vs. Kenny Omega at Full Gear. In a night of great lines, Omega adds "You're upset we're having a hardcore match, what were you going to do, chain wrestle me?" Clips of Omega and Moxley attacking each other are split between clips of young Moxley tearing it up on the indie scene.

Guevara is now vlogging his way to the ring, which only makes me nostalgic for Tyler Breeze. Omega wants to fight Jericho but gets Guevara instead. Omega slaps the head while working a wristlock, prompting Guevara to slap back. Omega dishes out open hand slaps and chops. Belly to back suplex by Omega and tag is made. Page and Omega hit a leg lariat and standing SSP while crowd chants "cowboy sh!t." Page counters into an overhead slam for 2. Jericho tags and runs into Page's boot. Jericho recovers with a missile dropkick and takes over the match. Omega gets a needed tag and overwhelms Guevara with open hand shots. Omega's moonsault gets 2! Guevara blocks some suplexes and hits an enziguri. Omega counters Guevara's springboard with a dropkick in mid-air. Omega catches an interfering Jericho with a rana , but Jake Hager cheap shots the back of the head! Crowd is PISSED. The Inner Circle is cooking as they take a commercial break (with 7 minutes of show left). Back from break, and Omega is getting worked over by the Inner Circle. Page gets the hot tag and runs wild with all sorts of Cowboy Sh!t. Omega back drops Guevara into the safe arms of Hager, but wipes them both out with a dive! Page follows with a top rope moonsault onto the Inner Circle! Pac runs in and kicks Page in the groin! Jericho hits the Judas Effect and finishes Page at 13:08! Good match elevated by the crowd treating these guys like superstars, ***½.
Winners: Chris Jericho and Sammy Guevara

The Inner Circle put the boots to Page and Omega. Cody runs in and uppercuts Guevara in the face. Jericho and Hager flee, and Cody dares them to come back. MJF ambushes Jericho and Hager with chair shots and tosses Jericho into the ring for a Cross Rhodes! Cody poses with the championship belt. Meanwhile, Jon Moxley arrives on the scene wielding a barbed wire bat. Jericho pulls Cody out the ring, and Omega retrieves a barbed wire broom to duel. Moxley and Omega's duel is cut short by Santana and Ortiz, who take the weapons from them. The Young Bucks make the save with a SUPERKICK PARTAY!!! The Bucks follow with torpedo suicidas as the crowd chants "AEW!" The Inner Circle regroup and almost powerbomb the Bucks off the stage, and Omega and Moxley finally get to exchange blows on the stage. The wild brawl results in Matt Jackson climbing onto the entrance tunnel and diving onto the field! Battle lines are redrawn and the brawl continues as the show goes off the air!

Final Thoughts: This show makes me so happy I could burst into song. Go watch this.

Final Thoughts: This flew by and was awesome all the way through. Excuse me while I mark out. Thumbs Up.