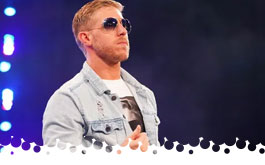 Live from Toronto, Ontario. Our hosts are Excalibur, Taz, and Tony Shiavone.

RENEE PAQUETTE starts the show with her own entrance and jumps straight into an interview with Christian Cage. Christian proclaims himself to be the face of Toronto, but still cannot help take a dig at the Mapleleafs' playoff failures.

Perry hits a shotgun dropkick right out of the gate. Perry steals Christian's moveset by standing on Luchasaurus' back and floating over for an uppercut. Luchasaurus answers with a German suplex. Luchasaurus sets up a table, but misses a chop against the ring post. Perry smells blood and attacks the freshly injured arm. Luchasaurus smashes Perry into the barricades to regain control. Back from commercials, Luchasaurus misses a charge and hits the buckles. Perry capitalizes with a tope attempt, which is nearly reversed into a chokeslam, but Perry reverses again into a rana. Jungle Boy then hits a wild sunset flip powerbomb through the table! Christian leaves commentary to interfere. Luchasaurus hits a Death Valley Driver for 2. Jungle Boy pummels Luchasaurus into a tree of woe , but Luchasaurus counters with a headscissors takedown. Buckle bomb by Luchasauurs, followed by a chokeslam for 2. Perry counters into a crucifix bomb for a hot nearfall. Perry tries a Killswitch but instead hits a spike poison rana! Perry then hits the Killswitch, but LUCHASAURUS KICKS OUT! Perry locks on the Snare Trap, but the dinosaur gets a dramatic rope break. Christian stops JB from dragging Luchasaurus away from the ropes, and Luchasaurus sneaks back for a top rope chokeslam. Luchasaurus hits an Attitude Adjustment to win at 14:07! Well, I certainly didn't see that finish coming. I know the goal here is to keep some heat on Christian while he recovers from injury, but this felt like a buzzkill in AEW's Toronto debut, ***.
Winner: Luchasaurus

Renee Paquette tries to interview Stokely Hathaway and Ethan Page, but Matt Hardy and Private Party interrupt to argue. I've lost track of what the issues are. Page makes a challenge to a Rampage match in an attempt to free Private Party from Matt's control.

Comoroto looks slightly less caveman-esque since I last paid him any attention, maybe he's ready to graduate from this loser stable. Joe and Wardlow dominate from the opening bell, Wardlow flips QT with a lariat. Wardlow hits Comoroto with overhead belly to belly suplexes. Comoroto fires back with shoulder thrusts, but Wardlow cuts him down with a spinebuster. Joe holds Comoroto down for Wardlow's Swanton Bomb! Joe chokes Comoroto out at 2:28. Crowd pleasing squash match.
Winners: Samoa Joe and Wardlow

The fans want more, so Wardlow makes QT suffer a Powerbomb Symphony. They're interrupted by Prince Nana and The Embassy. Brian Cage says that he hasn't seen FTR all day and doubts they were allowed into Canada. FTR appear right on cue to a big pop. FTR challenge The Embassy to a match on Rampage, with their old Pinnacle buddy, Shawn Spears, who comes out to an amusingly big pop (considering his AEW tenure to date). FTR put Aaron Solo down with the Big Rig, and Joe and the remaining Pinnacle guys stand tall.

Tony Shiavone is backstage with ROH World Champion Chris Jericho and 2point0. Angelo Parker calls Bryan Danielson a piece of garbage for breaking up their happy family by influencing Daniel Garcia. Matt Menard threatens Bryan with some gibberish. Jericho says Bryan forced him to hurt Garcia, who is like a little brother to him. Jericho vows to retain the ROH title against Danielson later on and continue his reign as "The Ocho."

Swerve Strickland vs. Billy Gunn (with The Acclaimed)

It should come as no surprise that Toronto also loves The Acclaimed and are ready to sing the Scissor Me song. Billy enjoys the early advantage, but gets carried away teasing a full moon. Swerve leaps through the ropes for a dropkick to the knee. Back from commercials, Swerve hits a slingshot knee drop to outside. Billy answers with a desperate tilt-a-whirl power slam. Billy hobbles through a comeback sequence, but Swerve blocks the Fame-asser. Swerve wrenches the bad knee over his shoulder and hits a Flatliner. Swerve mocks the Scissoring gesture and hits a flying double stomp, but BILLY KICKS OUT! Billy swats away a dropkick, Swerve blocks the One and Only, and grabs the ropes for a leverage pinfall at 8:48! This was Billy's best singles match in forever, thanks to the fans' DX nostalgia and modern Acclaimed love, **½.
Winner: Swerve Strickland

Despite the loss, Billy prepares a Scissoring lovefest with The Acclaimed. They're interrupted by Smart Mark Sterling and Tony Nese, who reveal that they've trademarked "Scissor Me" and The Acclaimed owe them their t-shirt profits. Sterling and Nese scissor each other to the fans' disgust. This is silly, but I kinda dig it.

Alex Marvez asks MJF about his near handshake with Wheeler Yuta. Stokely Hathaway interrupts to yuck it up with MJF about how funny their beatdown was. MJF refocuses for an intense promo directed towards Yuta about how hard it is to always be the bad guy. MJF thinks this is his ticket to becoming champion. He proclaims himself to be a generational talent and he's backing it up with these promos.

Tony Shiavone hosts AEW World Champion Jon Moxley in the ring. The crowd loves Moxley and boos the mere mention of Hangman Page. Moxley says it's not all fun games being World Champion, one which doesn't have time for being anxious, and he loves this job. This brings out Adam Page for a rebuttal. MJF looks on from the box seats while Page gets angry about Moxley dismissing him as a "nice kid." Moxley stands by his words and he doesn't think Page has it in him to take him out. Page admits that he's angry and the medicine isn't working anymore, but he's still here and still a man. Page is a husband, father, survivor, and keeps coming back for more! This speech earns a "Cowboy sh!t" chant. Page vows to become champion again by beating Moxley in Cincinnati, and is happy to say this to Moxley's face, unlike MJF in the stands. Big time promo by Hangman.

The presumed main event of the evening is going on around 9:00, which makes me think we're getting a screwy finish, or a surprisingly long match. Bryan tries a quick rollup. They trade chops, Bryan catapults Jericho outside for a tope suicida! Bryan nails a slam on the ramp and haul Jericho back for a stiff brawl. Jericho hits really weak looking punches on the top rope, followed by a super rana! Back from commercials, Danielson is going to work on Jericho's spine. Jericho answers with a DDT, but Danielson responds with an avalanche butterfly suplex! Bryan grabs a crossface, Jericho reverses into the Walls! Bryan fights out with vicious elbow strikes and steals the Walls for himself! Bryan follows with a roundhouse kick for 2. They trade counters until Jericho nails a Codebreaker for 2. They trade more counters until Jericho shoves Bryan into the referee, and they both go down. Matt Menard passes the ROH title to Jericho, but Daniel Garcia runs in to disarm his big brother. This allows Danielson to hit a Busaiku knee, but Garcia then knocks Danielson down too! Danielson makes a slow, late cover to win at 14:38! Great professional wrestling with a disappointing sports entertainment finish, ***½.
Winner and still ROH World Champion: Chris Jericho

William Regal, Claudio Castagnoli, and Wheeler Yuta march to the ring to check on Danielson and ensure the JAS can't do anymore harm.

Backstage, Renee Paquette is interviewing Nyla Rose and the Vicious Vixens. Nyla has stolen the TBS title from Jade Cargill, and makes no apologies about it. Anna Jay challenges Nyla to a match on Rampage, even though Nyla isn't the actual champion. This is silly, and I don't dig it.

Shida aggressively overpowers Hayter at the opening bell. Hayter kicks the gut, Shida answers with a dropkick. Storm tags in and grabs Hayter by the hair for a flurry of offense. Britt grabs Toni by the leg to allow a Hayter thrust kick. Back from commercials, Shida gets a hot tag right on cue. Hayter saves Britt from Shida's onslaught and takes an avalanche suplex for her trouble. Shida suplexes Britt onto Hayter! Shida hits a springboard meteora, but Britt kicks out! Hayter helps with a backbreaker on Shida, but Storm ambushes with a bulldog. Britt gets the glove, and Hayter sets Shida up for her double stomp. Storm saves the match, and DDT's Britt. Storm hits Britt with a Storm Zero , but Jamie tackles Shida to break the pin! The fans give them a non-standing ovation. Britt and Shida trade counters to "This is awesome" chants. Shida reverses a victory roll to win at 8:16! This was all fire after the break, **¾.
Winners: Hikaru Shida and Toni Storm

The Butcher and the Blade talk to the camera to build up some backstory ahead of their Rampage match against Jon Moxley and Claudio Castagnoli.

This match is a surprise nod for the main event, so I'm predicting that Cassidy finally gets a big win over Pac. Cassidy ducks an Irish punch, but Pac saves face with a lariat. Thrust kick by Pac, who shoves Cassidy's hands into his own pockets for some mocking sloth kicks. Cassidy counters with an explosive dropkick but Pac reverses his tope into a Falcon Arrow on the floor! Back from commercials, we learn that Pac gave OC a Tombstone piledriver on the ramp, but Cassidy managed to use gravity to roll back to beat the countout. Pac punishes OC with the Brutalizer until a rope break. Pac argues with the ref, which allows OC a pair of topes, with a swinging DDT on the second attempt. Cassidy DDT's Pac in the ring and follows wit the ORange Punch for only 2!!! Fans chant "this is awesome!" OC goes to the top rope, but Pac rolls away like OC has so many times before. Cassidy counters with Beach Break on the apron! Pac intercepts an Orange Punch and hits a bridging suplex into another Brutalizer! Cassidy rolls into a rope break. Pac goes for a title belt, but has to knock out Danhausen first. This gives the ref time to intercept him from using a hammer. Instead, grabs another hammer, but OC is ready for a closed fist. Cassidy considers using the hammer himself, and nearly gets pinned with a rollup. Cassidy retaliates with an Orange Punch, then hits a second Orange Punch to win at 11:18! Cathartic win for Orange Cassidy complete with a great ovation. This would have meant more 2 years ago, but I digress, ***½.
Winner and new AEW All-Atlantic Champion: Orange Cassidy


Best Friends show up with confetti to celebrate with Cassidy.

Final Thoughts: Like most episodes of Dynamite, as it's own self-contained show, this was very good. Still, I keep finding myself less than satisfied with the big picture direction of the company, like if you take 4-6 weeks of Dynamite and scrutinize the long term creative directions, more problems pop up.