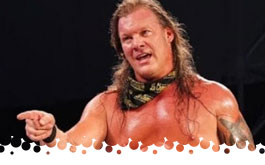 Welcome to a very special anniversary edition of Dynamite. They are celebrating 30 years of Chris Jericho. The program opens with talking heads gushing about how much Jericho means to them and the wrestling industry.

From Daily's Place. Our hosts are Jim Ross, Tony Shiavone, and Excalibur, as well as Taz and Ricky Starks. There are some paying fans in the stands as well as the usual wrestler stand-ins, though Miro, Kip Sabian and Penelope Ford are distracted by an arcade game.

They collide with shoulder tackles and start throwing hammers. Cage leap frogs and hits a back elbow, but Hobbs kips up . Cage blocks a suplex, but Hobbs hits a crossbody block. Cage bunches Hobbs up in the buckles to superkick the head and slams him for 2. Cage rolls Hobbs off the buckles again for a dropkick to the face. Overhead slam by Cage and standing moonsault gets 2. Desperation back suplex by Hobbs earns a breather. Hobbs rallies and delivers a power slam for 2. Cage kicks out of a sitout powerbomb. Cage answers with a pump handle slam. Cage's F5 only gets 2, so he throws a German suplex. Hobbs repays with a German of his own and they both go down after stereo clotheslines. They fight back up and Hobbs hits a spinebuster for another routine 2 count. Hobbs misses a frog splash and Cage finishes with Drill Claw at 9:10. This was well executed, but felt like a loop of trading power moves, kicking out at 2, and mechanically moving on to the next move, **½.
Winner and still FTW Champion: Brian Cage

Taz gives Hobbs an ultimatum, but Darby Allin interrupts with skateboard in hand and clears Team Taz out of the ring.

Slash, Dennis Miller, Hiroshi Tanahashi, Ted Irvine, and Bully Ray give Chris Jericho some props in video testimonials. I'd like to see those five guys hang out at a bar. The Tanahashi cameo has social media freaking out over the possibility of AEW and New Japan working together.

Lance Archer has gone crazy dwelling over Jon Moxley. He resents Moxley wasting time with Eddie Kingston and Butcher, and next week he becomes champion.

20 minute time limit is in place, though in all honesty, FTR shouldn't need it. Evans looks for a quick win, launching off Wheeler to DDT Dax. Angelico enters with a high crossbody on Harwood for 2. Angelico looks for a leg submission, but Cash pulls Dax to safety. FTR consider leaving but catch a diving Angelico, which sets up Evans leaping off the top rope. Evans seems to tweak his knee in the landing, and hobbles while hitting a powerslam. Wheeler crotches Evans on the buckles, allowing Harwood to wrench him down with a dragon screw. Harwood slams Evans' bad knee against the guard rail. FTR continue the assault through a picture-in-picture break. Back from commercial, Wheeler punishes Evans with a single leg atomic drop, but then Evans aggressively kicks him into the corner. FTR prevent a tag as Harwood puts him into a half crab. Evans escapes and makes the hot tag to Angelico, who runs wild with the sort of flippy offense that FTR is always complaining about. TH2 hit a double stomp/sidewalk slam combo for 2 on Wheeler. Evans hits an assisted 450 splash for 2. Meanwhile, the Young Bucks are seen watching backstage. FTR restore order as Harwood German suplexes Evans into position for Wheeler's Dragon suplex. Angelico saves the match, but gets thrown out. Evans blocks a superplex but then botches a corkscrew leg drop. Wheeler catches Angelico at ringside to drive his face into the apron. Evans reverses Harwood into a pinning predicament, blocks a German by landing on his feet and hits a somersault kick. Dax answers with a lariat and Tiger Driver for 2. FTR hit a superplex and top rope splash to finally finish Evans at 13:40. They set out to have a great match (hindered by general sloppiness, possibly due to a legit injury from Evans), but I spent the second half the match wishing that FTR would just have squashed TH2 like bugs, **¾.
Winners and still AEW Tag Team Champions: FTR

The Young Bucks don't like having a camera pointed at them and take it down with superkicks. The big screen cuts to photoshopped images of FTR dressed as giant hot dogs, apparently the handiwork of Best Friends, who come out to talk. In case you missed the subtle satire, Trent explains that FTR are weenies. Chuck reveals they are the new #1 contenders, and they get their shot at next week's Dynamite Anniversary show. A quick brawl leads to FTR backing down. I wish Best Friends weren't channeling John Cena circa 2009 with the lame insults.

MJF tells a story about meeting Chris Jericho for the first time. Jericho was drunk at an afterparty and offered encouragement. MJF claims to have been inspired at that moment.

Shaquille O'Neal, Gene Simmons, Don Callis, Lars Ulrich, and DDP put Jericho over for kicking so much ass over the last 30 years.

Video recap of all the events that brought us to tonight's Dog Collar Match between Mr. Brodie Lee and Cody.

Greg "The Hammer" Valentine is in the stands, so you know this is serious. Bell rings and a standoff results in Cody leaping past Lee to knock Silver off the apron. Lee enjoys an early advantage. Cody dodges an elbow drop and hits his patented uppercut, but then totally misses the springboard cutter. Lee faceplants Cody on the apron, and orders a bloody Silver to take a seat, only for Cody to ambush Silver with a running dropkick. I can practically hear the sound of 160,000 BTE viewers guffawing from my basement. Jay helps Silver to the back, leaving Lee to wear Cody down by his lonesome. A bloodied Cody crotches Lee with the chain and hits an assisted Russian leg sweep. Tope suicida by Cody, but Lee then uses the chain to bash him against the barricade. Lee sets up a table at ringside, but Cody pulls him off the apron for a neat variation of his cutter onto the floor! That sends us to commercial. During the break, Cody puts Lee through the table with a package piledriver. Lee is totally busted open as Cody just pours it on by using the chain as a whip. Cody has trouble getting the chain to cooperate, so Lee tries to hang him over the ropes. Cody leaps in only to eat a black hole slam. Lee throws a chair at Anderson like a frisbee, so Anderson rushes in to stop Alex Reynolds' interference with a spinebuster. Cody manages to build some steam and hits a moonsault for 2. Cross Rhodes only gets a 1 count! Lee slips on the chain to hit a glancing superkick, so he recovers with a better superkick and powerbomb for a good nearfall. Superplex by Lee gives them a breather. Cody tries to fire himself up but runs into a disgusting Dragon Suplex. Cody counters with the Final Cut and wraps the chain around Lee's face. Cody hammers the forehead and hits Cross Rhodes to reclaim the TNT title at 20:28! This title change is a nice surprise, though you have to wonder where the Dark Order goes from here. The match was pretty good, but was lacking something I can't quite put my finger on, ***¼.
Winner and new TNT Champion: Cody

Postmatch interview with Cody, surrounded by the Nightmare Family. He thanks the fans for being here tonight and rejects any notion that he's turning heel. He's sticking with the people! Cody wants to defend the TNT title on the anniversary show, which attracts Orange Cassidy to the stage. They trade thumbs ups and looks like it's on. Cool moment for Cody, though one might wonder why OC gets another shot at the TNT title after losing to Brodie.

Hangman Page is revealed to be a part of the 8 man #1 contenders tournament. Alex Marvez interviews Kenny Omega, who is chomping at the bit to win another tournament.

Ah man, I want them both to win. They lock up and grapple to a stalemate. They lock knuckles and Deeb puts Swole into a roll-up for 1. Swole wraps Deeb's arm around her own neck and pulls her into a knee to the spine. Deeb blasts Swole in the face and wraps her knee around the bottom rope. Deeb hits a neckbreakers in the ropes to send us to picture-in-picture. Back fro break, Swole blocks a hard Irish whip and hits a back elbow. Swole mounts a comeback and knocks Deeb down with a headbutt to the chest. Deeb counters with a backstabber. Swole blocks a piledriver, and they trade running shots. Swole's rolling elbow gets the win at 8:33. This was alright, **¼.
Winner: Big Swole

AEW World Champion Jon Moxley reflects on one year of Dynamite. He knows that eventually someone will take him out, and it could be Lance Archer. They cut to photographs of Moxley vs. Archer in New Japan, throwing more gas on the flames that AEW and New Japan are reaching some sort of deal, and Jon confesses that it was a hard match for him to move on from. Moxley admits that everyone dies and seems ready to face his fate. I don't think I stress enough most weeks just how awesome Moxley's promos have been over the past year.

Chaos Project (Luther and Serpentico) vs. The Inner Circle (Chris Jericho and Jake Hager, with Santana, Ortiz, and Sammy Guevara)

The way that Jericho has been quietly enjoying the fans singing along to his music lately makes me think a babyface turn is on the horizon. Serpentico is eager to please and catches Jericho with a rana. Luther tags in and trades chops with his good buddy. Big boot by Luther and a double underhook suplex. Serpentico returns with a slingshot double stomp to the chest. Luther suplexes Serpentico onto Jericho to send us to picture-in-picture. Back from break, Jericho is enjoying himself as the Inner Circle works Serpentico over. Serpentico counters with a DDT, and Luther tags in to clothesline Jericho outside. Luther backdrops Serpentico onto Jericho and Hager, and then hits a top rope somersault senton onto the entire Inner Circle! Flying knee drop by Luther gets 2 on Jericho. Luther slips on the apron and takes his time setting up a springboard bulldog. Luther ducks a Judas Effect and hits a German suplex. Luther hoists Jericho for Serpentico's flying knee drop, and Hager storms in to remove the snake man. Luther takes away Floyd and cracks it over Jericho's gut, followed by a big boot for 2. The Judas Effect finishes at 9:08. Bizarre main event, as the Chaos Project made their in-ring Dynamite debuts, but this succeeded in giving Jericho a nice moment, **¼.
Winners: The Inner Circle

Chris Jericho is ready to give a friendly thank you speech when he's rudely interrupted by MJF and Wardlow, with a mystery figure under a pink cloak. MJF says he's here because he respects Le Champion, and unveils a clown bearing a wrapped gift. This seems to be bombing hard with the crowd. MJF teases a career defining moment next week and Jericho unwraps a framed portrait of MJF. Jericho smashes the picture over the clown's head. Jericho: "I hate clowns and never interrupt me again." They stare each other down but then simultaneously smile and make nice. The ring fills with the heel locker room for a party as fake credits roll, giving Jericho credit for everything, including catering.

Final Thoughts: Relatively weak episode of Dynamite, with some questionable booking and writing, and several matches underdelivering. Putting Chaos Project in the main event was a really bold, possibly arrogant, move, which makes me think that Khan owed Jericho a favor, and maybe they thought they'd get killed by the VP debate anyway. I'm hopeful for a rebound on next week's anniversary show.