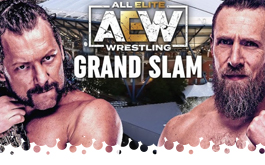 Live from Arthur Ashe Stadium in New York City. There's somewhere in the ballpark of 20,000 fans in attendance. Our hosts are Jim Ross, Tony Shiaovne, and Excalibur.

The crowd is going BONKERS at the opening bell and both guys let the moment breathe before locking up. Kenny doesn't like getting booed for a clean break, so he hits a snide chop. Bryan kicks the chest to a pop. Omega obnoxiously uses the ropes to break a hammerlock, so Bryan kicks him down. Omega cartwheels into position for a mean chop. They restart with a test of strength. Bryan pulls back the fingers and stomps the arm into the canvas. Bryan goes on an offensive flurry and nails a slick tope suicida. Bryan rakes the face and reminds the ref that he has until FIVE to break. Omega fires back with chops that leave Bryan's chest bruised. Bryan angrily returns fire, but runs into Omega's knee lift. Finlay Roll by Omega, but Bryan blocks the moonsault! Bryan mounts his classic comeback, hitting the running clothesline while the fans chant along. Shotgun dropkick by Bryan, and YES kicks. Super rana by Bryan gets 2. Kenny answers with a leaping rana, sending Bryan to ringside for a breather. Omega hits a soaring plancha to ringside. They trade pinfall attempts, and Bryan rolls into CATTLE MUTILATION! Omega escapes through the ropes. Bryan hits a flying knee onto the ramp, and hits more YES kick, but Kenny pops up for a SNAP DRAGON! Kenny runs down the ramp to hit an extra mean V-Trigger, and after 17 minutes, they finally cut to commercials. They return with Omega continuing to dominate with a buckle bomb. Bryan reverses with the avalanche back suplex! They trade stiff blows, Bryan hits another back suplex for only 2! They both go down for a standing ovation. Omega then hits an AVALANCHE DRAGON SUPLEX but BRYAN KICKS OUT! Luckily, Bryan landed on his stomach instead of his head. V-Trigger, but Bryan reverses One Winged Angel into a POISON RANA! V-Trigger misses, Bryan hits a KO kick. Omega reverses the running knee into a powerbomb, hits another V-Trigger, but Bryan kicks out! Omega's Phoenix Splash misses! Bryan hits more YES kicks and a roundhouse kick to the head. He traps Kenny's arms and stomps his face, and looks for the LeBell Lock to no avail. Kenny hits more V-Triggers, and the announcers make it clear that the 30 minute time limit is approaching. The time expires at 30:00, but Bryan won't stop and puts Kenny into the LeBell Lock! The Young Bucks and Adam Cole force a break, and the match is declared a draw. The fans are NOT happy with that finish, and time will tell if this was a good call or not. Everything else before the downer ending was pure gold. It's not often that I don't want a match to ever end, they were tapping into something special, thanks to a hard earned bond with the live audience and the unique circumstances of the match happening at this time and in this venue, ****¾.
No Contest


The Bucks and Cole hit Bryan with triple superkicks. Christian Cage and Jurassic Express rush in for the save.

Well, the fans must not be too upset, because they give CM Punk another superstar ovation. Punk resists the urge to do any more stage diving, he's given security enough scares as of late. Punk is glad he doesn't have to follow Bryan and Kenny by wrestling, and it's been a long time since pro wrestling has been in NYC. Punk is still mad about Team Taz trying to put him through a table, but the lovefest with the fans still puts a smile on his face. Punk is pissed that Team Taz tried to take all of this away from him, but wrestling belongs to him again. He vows to put Powerhouse Hobbs to sleep on Rampage. Punk gives Stephen Amell a hug and that's a wrap.

MJF (with Wardlow) vs. Brian Pillman Jr. (with Julia Hart)

Pillman rejects a handshake and hits a double legged takedown instead. Pillman hits some deep arm drags and a hip toss. Back body drop by Pillman, but MJF goes for the throat. Pillman shakes it off, and seems to be one step ahead of MJF. They trade hard slaps, but MJF pulls Pillman into the buckles for some easy shots. Pillman comes back with a sunset flip and backslide pin for 2. MJF snaps Pillman's shoulder down to take control and send us to commercials. They return with MJF enjoying the advantage. Pillman makes the obligatory post-commercial break babyface comeback. MJF uses Julia as a shield and manages a cheap shot. Julia tells MJF off and slaps him, MJF angrily grabs her arm and doesn't see Pillman's basement dropkick coming. MJF reverses the springboard clothesline into Salt of the Earth for the win at 9:26. Solid, yet formulaic match. The fans were receptive to it, **½.
Winner: MJF

Alex Marvez interviews Chris Jericho and Jake Hager backstage. Hager dismisses Men of the Year as "Boys of the Week." Jericho thinks Dan Lambert's guys made a mistake by challenging them, and he might bite his nose off and spit it into the fifth row. Jericho and Hager are feral and ready to smack around some MMA meatheads.

The NYC crowd HATES Cody. They don't like Brandi much either. Arn is okay. Cody is smart enough to acknowledge the boos, and tie it into his character's emotions while squaring off against Black. Black hits a leg sweep, fakes a dive, and takes a seat. Cody storms around angrily while Brandi seats herself in front of Black and flips him off. Cody lunges but gets stuck in an Octopus variation. Cody tosses Black onto the ramp for a Disaster Kick. Cody gets distracted by the booing and flies into Black's leaping knee, and it's time for some commercials. They return with Cody laying on the floor in danger of getting counted out. Cody beats the count and chop blocks Black's leg. Cody then hits a dragon screw through the ropes. Cody Cutter and Cross Rhodes, but BLACK KICKS OUT! Black whips Cody into Arn. Cody checks on his coach, but Arn shoves him away in frustration. Cody shoves the ref aside, allowing Black to spray dark mist into his eyes, and gain the pin at 11:15. Triumphant win for Black, as he not only pinned Coddy, but has the satisfaction of turning him into the most hated man in the promotion, **¾.
Winner: Malakai Black

Hype video for Miro vs. Sammy Guevara. Miro may have suffered a broken neck, but his God and hot wife put him back together. Sammy is coming for the TNT title next week, and he'll even buy Fuego Del Sol a new car.

FTR have special nWo style gear, just to mess with Sting. Darby starts against Dax, who gets quickly distracted by the rowdy fans. Quick tag to Sting, who locks up with Cash. Dax interferes, Sting blocks an Irish whip to hit some clotheslines. Stinger Splash misses, and FTR manage to cut him off in their corner. Darby gets a quick hot tag and cleans house, but FTR reverse a Coffin Drop into a tandem slam onto the apron. They cut to commercials. They return on the tail end of FTR working over Darby in their corner. Darby rolls through a double clothesline to make the hot tag and Sting cleans house and hits Dax with a spinebuster for 2. Sting hits Dax with a flying crossbody for another 2! Sting blocks Harwood's Tombstone piledriver, but Cash interrupts Darby's Coffin Drop. Stinger Splash on FTR and Scorpion Death Drop on Wheeler! Sting avoids a missed splash through a chair, and clocks Tully! Sting's rollup on Dax gets 2! Scorpion Deathlock on Dax, Darby stops Cash's interference with a Coffin Drop to the apron, and Dax taps at 9:31! Simply too much fun, ***.
Winners: Sting and Darby Allin

Rhodes to the Top premieres next week. I don't think this will help Cody's case with the live crowds.

The fans are rowdy for this one and chant many noisy, inaudible things while they lock up. Britt retreats, Ruby misses her on a dive and takes down Rebel. Britt capitalizes with a neckbreaker from the apron. The heel is in charge, so it's time for some commercials. They return with Ruby catching Britt with double knees out of the buckles. Running kicks by Ruby, back drop driver, and they exchange thrust kicks for a breather. They slug their way to their feet. Britt looks for Lockjaw, Ruby blocks, but Britt improvises with Sling Blade. Britt misses a curb stomp and Ruby applies a half crab. Ruby catapults Britt into the buckles and then nails an enziguri. Back senton by Ruby gets 2. Swinging neckbreaker by Britt, and then a superkick for 2. Britt hits an avalanche Air Raid Crash, but RUBY KICKS OUT! Britt stomps Ruby's face into the steps and follows with a double stomp for another good nearfall. Britt argues with Aubrey Edwards and nearly gets pinned in a roll up. Ruby kicks Britt down, but gets tied up knocking Rebel and Hayter from the apron. Britt capitalizes with Lockjaw and wins at 13:23! This started and ended strong, but was pretty meandering at times. They must have done something right, because I'm pretty disappointed that Ruby didn't win, **¾.
Winner and still AEW Women's Champion: Dr. Britt Baker

Final Thoughts: In 2021, a non-WWE wrestling company can sell 20,000 tickets to a stadium show and deliver a near five star match featuring Bryan Danielson vs. Kenny Omega. What a time to be alive. Yeah, everything afterwards was standard TV fare, but that's okay, you know, because this was a TV show and all.