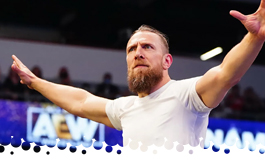 Sammy stalls, but fails to lure Moxley into playing cat and mouse. They lock up, Moxley goes on offense on the mat. Sammy turns it around with slugging offense, but Moxley flips him with a lariat. Sammy hits a wild somersault senton, followed by a tornado dive. Sammy kicks Moxley into the ring steps. Back from commercials, Moxley blocks a piledriver on the apron. Superplex by Mox gets 2, so he goes for the kimura. Sammy reverses into a Boston crab, hits an enziguri, and double springboard cutter (all with an awkward wedgie). Moxley reverses the GTH into the bulldog choke, complete with hammer n' anvil elbows. Guevara reverses into a standing Spanish Fly for 2. Moxley sneaks into a German superplex. Anna Jay and Tay Melo arrive to run interference, and Tay kicks Mox in the groin. Guevara capitalizes with a rollup for a hot 2 count. Sammy misses a Swanton bomb, Moxley rolls him over for 2. Moxley blocks another GTH and hits Death Rider to win at 13:28. This was good and all, but was missing something intangible to make it great, ***.
Winner: Jon Moxley


MJF storms out for an angry promo. He takes his anger out on Jon Moxley and compares him to all the hicks in Albany. If that wasn't bad enough, MJF mocks him for his drinking problems. Moxley might've conquered his demons, but MJF is more dangerous than alcoholism. MJF welcomes his best friend, Stokely Hathaway, and his group, now branded "The Firm." Stokely explains that the group is on MJF's retainer, and when they're not needed, they'll go their separate ways. Unfortunately, Stokely's promo overstays its welcome and has trouble keeping the crowd engaged.

Earlier today, Jungle Boy issued an open contract for a match tonight. He was hoping that Luchasaurus would take the bait, but he's getting Jay Lethal instead.

They lock up and get a clean break, but Lethal pats JB on the head. JB has to control his emotions before managing to score his springboard armdrag and low dropkick. Jungle Boy blocks the Figure Four but can't hit a dive when Singh gets in the way. Dutt's distraction allows Lethal to slam JB onto the top buckles. Back from commercials, JB is hurting, but has enough fight left in him to trade blows on his knees. JB's back is too injured for a suplex, Lethal smells blood, but JB blocks the Lethal Injection with a lariat. JB uses all his adrenaline to hit a Brainbuster for 2. Lethal answers with a Russian leg sweep from the second rope for 2. JB blocks another Lethal Injection, teases a Killswitch, but eats a Lethal Combination instead. Lethal hits a tope suicida, followed by the flying elbow for another 2 count. JB reverses into the Snare Trap, but lets go to get rid of Dutt. Lethal nearly steals it with a rollup, but JB reapplies the Snare Trap to win at 10:38. Good match that pulled the quiet crowd into it with JB's strong babyface performance, ***.
Winner: Jungle Boy

Video package of Hook and Action Bronsen training together. They're going to teach 2point0 a lesson at Grand Slam.

Alex Marvez tries to interview some goofy pizzamaker, but Ethan Page interrupts with a big boot. Page is sick of all the goofiness and wants to take out all the jesters in AEW, which means he'll face Danhausen on Rampage.

Footage of Darby Allin doing crazy tricycle stunts on his day off. Matt Hardy reappears to challenge him to a Rampage match, because he wants to get his career back on track.

The jobber is billed from Albany, so you know he's dead. Hobbs wastes little time hitting a spinebuster for the win at 0:30. This worked.
Winner: Powerhouse Hobbs

Hobbs stays in the ring because he has something to say. He doesn't like the "We want Ricky" chant. He spent 21 months grinding with Ricky, but it only took 4 minutes to beat him at All Out. He wants to move on to write a new chapter in "The Book of Hobbs" but he might have to wait because Ricky Starks walks in through the crowd. Starks initiates a brawl and clocks Hobbs in the face with the microphone. Hobbs retreats, and this feud must continue!

Fresh off winning the World Trios Championship, the Lucha Bros. are gunning for the plain, old Tag Team Championship and they'll get their shot tonight. Right now, in fact.

Swerve arm drags Penta, who answers by attempting to break his arm. Penta kicks the gut instead and tags in Fenix for a rolling dropkick. Penta slams Fenix onto Swerve for 2. Swerve hits Fenix with a rana from the ropes, and tags in Lee to change the mood. Lee overpowers Fenix, and it's time for commercials. They return with Swerve stretching Fenix over his back. Fenix hits a roundhouse kick and Penta storms in on a hot tag. Fenix dives onto Lee, who throws him into the ring to break Penta's cover on Swerve! Fans chant "This is awesome!" Tag to Lee, who catches Fenix in midair for a backbreaker. Penta saves his brother from getting double teamed, and Fenix hits Swerve with a springboard Spanish fly! Penta hits Lee with a DESTROYER but LEE KICKS OUT! Fans chant "Holy sh!t!" Swerve knocks Fenix from the top rope while Lee slams Penta to win at 8:17! They packed a ton of great action into this relatively short match, ***½.
Winners and still AEW Tag Team Champions: Swerve in Our Glory

The Acclaimed arrive to insult Swerve in Our Glory with some rap. This nicely sets up their rematch for Grand Slam, and I daresay it's time to belt The Acclaimed.

Alex Marvez wants to talk to Lucha Bros. about their loss, which offends Pac. He reminds us that they're still piled in gold and deserve some respect. Pac is ambushed by Orange Cassidy, who would like a championship or two.

Video promo with Toni Storm and Athena. They are going to beat up Britt Baker on behalf of Hikaru Shida, who was recently put on the shelf by a backstage attack.

Toni starts with Serena, who's been badly missed on this show for several weeks. Athena tags in and hits a slingshot crossbody. Athena hits a nifty powerbomb, but Britt's distraction lets Deeb ambush her knee to send us to commercials. We're back with Storm making a conveniently timed hot tag. Britt rolls away from a hip attack, so Toni DDT's her off the apron. Britt answers with Sling Blade, and tags in Deeb. Athena returns to duke it out with Deeb. Serena counters into a cross armbreaker, but Athena reverses with a dead lift attempt, followed by a Meteora! Storm dives in with a crossbody, but Deeb reverses into a half crab! She refuses to let go despite Athena kicking her, and Baker assists. Britt dispatches Athena with the ring steps. Rebel distracts the ref while Britt interferes with a chair, giving Deeb the easy pinfall at 8:35. This was in paint-by-numbers territory before getting creative after the commercial, but that finish kind of stunk, **¼.
Winners: Serena Deeb and Britt Baker

Britt and Serena continue with a post-match beatdown. Jamie Hayter runs in to tease a turn, but instead joins in on the beatdown.

Danielson scores first with chops and kicks. Running dropkick by Bryan, but Jericho fires back with chops. Bryan tosses Jericho for a low dropkick. Bryan hits a flying knee from the apron! Bryan uses the ring post to soften up Jericho's arm and hits a missile dropkick Diving headbutt (ugh) by Bryan gets 2. Bryan unloads YES kicks, but Jericho pops up for a surprise German suplex! Jericho's springboard dropkick signals a shift in momentum, and he follows with a crossbody to ringside. They trade slaps and chops. They collide with double crossbody attempts and it's time for commercials. They return with Jericho hitting a super rana! Bryan dodges a Judas Effect and nails a German for 2. Bryan applies Cattle Mutilation, but settles for hammer n' anvil elbows. Jericho reverses into his own elbows, but Bryan no-sells while gazing at the AEW title. They shift to another chopfest, but Jericho hits a Codebreaker out of nowhere. Bryan pops up for a Busaiku Knee! Fans chant "Fight forever!" They trade chops yet again, and Jericho hits a suplex to outside! Bryan sells a serious ankle injury. Jericho smells blood and goes to work on the bad ankle. Jericho locks on a Figure Four around the ring post! Jericho follows with a mean kneebreaker, and Danielson is too injured for a proper Busaiku knee! Jericho applies the Walls of Jericho, Danielson is trapped for an eternity before reversing into a desperation roll-up for 2. Dragon screw by Jericho, followed by a Figure Four! They trade blows while locked in the hold. Bryan reverses into the LeBell Lock and then a crossface to win at 19:41! That was the most thrilling submission finisher battle I can remember watching in quite some time. Tremendous professional wrestling, this blew their All Out match out of the water, ****¼.
Winner: Bryan Danielson

Jon Moxley comes out to confront his friend, Danielson, ahead of their tournament finals at Grand Slam.

Final Thoughts: The wrestling was good throughout the show, which is arguably the point of a wrestling TV show. This wasn't the hottest Dynamite, but was a functional show that nicely set the table for Grand Slam.