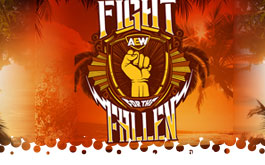 Live from the DCU Center in Worcester, Massachusetts. Our hosts are Jim Ross, Tony Shiavone, Taz, and Excalibur.

If I felt like nitpicking, I could question why Rush is getting this title shot when this is his third match in AEW, but I'm too pumped up for this to worry about it. Rush ambushes Moxley in the ropes and dominates early. Rush bites an open wound on Mox's forehead. Rush gets overconfident and doesn't see Moxley's suicide dive coming. Moxley hits a suplex on the floor, Rush answers with a power slam in the ring. Back from commercials, Moxley hits a superplex. The crowd plays along while they trade chops. Moxley shakes off a German suplex and fires one of his own. King Kong lariat by Moxley, who looks deranged, but Rush answers with another German. Rush applies a crossface, Moxley reverses into face stomps. Rush blocks the Paradigm Shift and hits an overhead suplex into the buckles. Moxley bites the forehead, but Andrade El Idolo runs in to trip him on the top rope. The Lucha Bros. run in to remove Andrade. Rush nearly steals it with a stiff elbow, but Moxley counters with another mean lariat. Rush answers with a straight jacket piledriver for a great nearfall. Rush misses the Bulls Horns, but headbutts out of the Bulldog Choke. Moxley muscles out the Death Rider but RUSH KICKS OUT! Moxley wastes no time locking on the Bulldog Choke and wins in dramatic fashion at 14:00! Tremendous outing, with hard physical action, ****.
Winner and still AEW Interim Champion: Jon Moxley

Moxley's celebration is cut short by the Jericho Appreciation Society coming. Angelo Parker tells the "AEW Galaxy" to "Appreciate us!" Chris Jericho touts the big night ahead of his stablemates and formally welcomes Anna Jay into the group. She declares herself to be the NEW Anna Jay, and she threatens to choke out all the fans to prove she's the toughest. Jericho complains about getting his nose broken by Eddie Kingston and then having to be cut out of the barbed wire spiderweb like a horse fly. Jericho demands his long awaited rematch for Moxley's title in two weeks at Quake at the Lake. Moxley hates Jericho and all this sports entertainment bullsh!t. He used to look up to Jericho, so he challenges Jericho to show up as Lionheart.

Tony Shiavone talks to Dante Martin about his match with Sammy Guevara. Dante knows that Sammy will have Tay Conti with him, so he's bringing in Skye Blue, who looks surprised to be there.

The fans like both guys and are pretty torn at the bell. They play along as Danhausen summons a curse, but Starks boots him in the face. Starks summons his own curse, so Danhausen hits a pump kick and overhead suplex. Starks gets rolled up for 2, but surprises with a spear to win at 1:31. This was cute while it lasted.
Winner and still FTW Champion: Ricky Starks

Starks isn't satisfied and asks for another challenger "for real this time." This turns out to be a big mistake, because HOOK answers the call.

Hook ducks a punch and unleashes a barrage of offense. Hook nails a pump handle suplex, but Starks answers with a belly to back suplex. Hook blocks a hip toss, but Starks hits a spear! Starks looks for Roshambo, but Hook reverses into Red Rum for the win at 1:34! Crowd pops big for the title change, which is something I never thought I'd say about the FTW title. This felt a lot like a Money in the Bank cash-in.
Winner and new FTW Champion: Hook

Back from commercials, Tony Shiavone is standing by with a beaten Ricky Starks, with Powerhouse Hobbs. Starks admits he lost, but claims he took the FTW title when it was considered to be a noose and turned it into a tie. He emotionally advocates for himself that he's busted his ass long enough that he deserves more than 40 seconds to talk to the fans. His time was last month, last week, and right now, and Hobbs has heard enough and blindsides him with a lariat to the back of the head. Hobbs slams Starks and stands over him. Depending on what happens next, this could end up being a classic Dynamite moment.

The Acclaimed talk to the camera about the Gunn Club. They will unveil a new music video on Rampage, so set your DVRs.

They briefly lock up before running the ropes and trying to outflip each other for offense. Dante plays mind games by mocking Sammy's resting pose. Dante fakes Sammy out on a dive and they reach a stalemate. Sammy tries to walk out, but Dante cuts him off and hits a somersault dive from the stage! Back from commercials, Dante dumps Sammy over the ropes but then flies into Sammy's knee strike. Sammy hits a dive of his own and then a Spanish Fly for 2. Dante leaps over Sammy and hits a Samoan Drop variation for 2. Sammy blocks a double jump moonsault, but Dante lands on his feet from a top rope throw, hits his own Spanish Fly, and gets 2! Side slam by Dante also gets 2. Sammy follows Dante through a double jump sequence and hits a cutter, followed by the GTH to win at 8:49! Good stunt show, although I don't know what the point of having Skye out there was, ***.
Winner: Sammy Guevara

Skye hesitates but ultimately gets into the ring to shield Martin from Sammy on the top rope. Anna Jay runs in for the group beatdown on Skye. Ruby Soho, Ortiz, and Eddie Kingston make the late save to a nice ovation.

Tony Shiavone talks to Daniel Garcia about his match against the returning Bryan Danielson. Garcia is confident because he feels he's had the training advantage over Bryan in recent months. After he beats Bryan, DG will be known as the greatest technical sporters entertainer in the world.

Jay Lethal, Sonjay Dutt, and Satnam Singh complain about Best Friends in the parking lot, as if the trio isn't standing six feet away wearing tie-dye outfits. This sets up a six man tag for Rampage.

Tony Shiavone hosts Jungle Boy and Luchasaurus in the ring. Jungle Boy takes a deep breath before calling Christian Cage the biggest pu$$y he's ever met in his life. He didn't understand why Christian was so mad about losing to him in a battle royal, which shouldn't be a big deal, but know Jungle Boy knows that he was strapped for cash after his divorce. Turns out Luchasaurus was only helping Christian so no one could get their hands on him before Jungle Boy. Christian Cage interrupts on the big screen and threatens to bury Jungle Boy next to his deceased father. Christian knows all of JB's secrets and is ready to prey on his weaknesses. As I've said in other reviews, I don't care for using real life dead relatives to build heat, but divorces are perfectly fair game.

Brandon Cutler wants to team up with the Young Bucks for the Trios Tag Team Tournament, but they're not interested. They try to talk to Hangman Adam Page, but he's surrounded by the Dark Order.

Keith Lee has been barred from ringside and is seen watching backstage. Swerve traps Nese for a backbreaker. Nese pokes the eyes, but Swerve wrenches his arm into the ropes. Sterling's distraction lets Nese drop Swerve onto the apron to send us to commercials. Back from break, Swerve is fighting uphill against Nese. Sterling is accidentally tagged in when Nese is knocked backwards. Swerve hits a diving uppercut on Nese, but he's not the legal man. He superkicks Nese onto the apron for a brutal double stomp to the chest. Swerve hunts down Sterling and hits a step up kick to the head for the win at 6:45. Not terribly interesting, but Swerve gets put over, *½.
Winner: Swerve Strickland

The big screen reveals that Keith Lee has been taken down by Josh Woods. Nese clocks Swerve from behind and admires his Tag Team title belt.

Spooky House of Black video package. Malakai Black is tired of society worshiping people who add nothing of value, which means he's gunning for Miro. Meanwhile, Brody King wants a Coffin Match against Darby Allin, I guess for revenge at having already beaten him cleanly.

They start with a grappling contest. They trade armdrags and pinning predicaments. Yamashita seems unsure of her footing as they fight on the apron. Yamashita hits a slow motion legsweep, Rosa answers with a shotgun dropkick outside. Yamashita springboards off the apron to hit a punch. Back from commercials, Rosa hits a corner clothesline and pendulum double knees. Rosa hits another low dropkick and a suplex with a bridge for 2. Yamashita stops Rosa on the top rope with a head kick, and they trade elbows. They trade kicks, and Yamashita hangs on for a wheelbarrow German suplex. Yamashita hits a mean skull kick for 2. Rosa's DDT nearly ends, they trade more kicks. The Thunder Driver ends it at 10:04. This was pretty disjointed and awkward, but they pulled it together for a tight finishing sequence, **.
Winner and still AEW Women's Champion: Thunder Rosa

Danielson greets Garcia with a shotgun dropkick and lights him up with YES kicks. Bryan hits another running dropkick and dumps Garcia outside for a full steam dive. Fans chant "Welcome Back" while Danielson drives Garcia's shoulder into the ring post. Danielson mounts Garcia for a bludgeoning. Garcia responds with uppercuts and a delayed neckbreaker. Garcia exposes some concrete floor, but Danielson cuts him off with a shotgun dropkick into the rails. Garcia drops Bryan onto his head, and a hush comes over the arena. Bryan tries to set up his patented clothesline, but collapses while selling his head injury. Garcia capitalizes with a DDT onto the exposed concrete! Back from commercials, Garcia has a bloody Danielson right where he wants him. Bryan desperately powers into a back superplex! Bryan rallies with quick, stiff attacks. Garcia boots Bryan in the gut and pulls him into a rear naked choke, but Bryan reverses into Cattle Mutilation! Tiger suplex by Bryan only gets 2! They exchange hammer elbow shots, and Bryan fires away a shoulder capture suplex! Garcia answers with a brainbuster! Fans chant "this is awesome" while they tear into each other. Bryan hits his patented flying knee, Garcia quickly breaks the Labell lock. Bryan hits the flying knee from the apron, but someone under the apron grabs his leg to stop him from capitalizing. Garcia is free to hit a piledriver and apply a deep sharpshooter! Bryan passes out and Garcia wins at 17:10! This was a total war with a shocking outcome, ****¼.
Winner: Daniel Garcia

Final Thoughts: The first hour is one of the better hours of Dynamite that I can remember in quite some time. After that, the Women's title match disappointed, but Danielson/Garcia overdelivered. I was expecting a good match with Garcia teasing an upset before Danielson ultimately put him away, instead Garcia is elevated and looks like a major villain in the process. I can't help but feel like Dynamite has been complacent in recent months, but this episode was anything but.