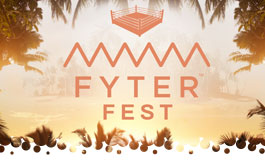 Live from the Gas South Arena in Duluth, Georgia. Our hosts are Taz, Tony Shiavone, Excalibur, and Jim Ross (for the second hour).

Darby instantly hits a shotgun dropkick, but King reverses his dive with a toss into the rails. Allin escapes a chokeslam and sends King into the steps. Back to the ring, Allin runs into Brody's fist. King's snapmare sets up some back sentons. Darby tries a flying shoulder block, but King reverses with a standing tackle. King spins Darby around by his belt and releases him for a rough landing. Darby takes a prolonged beating through a commercial break. Darby then ties up Brody's feet with his belt and sets him up for a high speed dive. Darby hits a running corner splash, but Brody answers by putting him into a tree of woe for easy chops. Darby sits up to avoid a running cannonball and nails Code Red for 2! Darby tries a sleeper but Brody smashes him into the buckles with a cannonball. King blocks a stunner and dangles him off the apron with a chokehold. Darby avoids getting counted out and is rewarded with a Ganzo Bomb, and Brody gets a huge upset win at 12:37! Hard hitting match with Darby putting in extra effort to make Brody look monstrous, ***½.
Winner: Brody King


King hoists up a lifeless Darby and successfully lures Sting back to the ring. Sting sets up a Scorpion Death Drop, but out go the lights, and Malakai Black appears face to face with the Stinger. This allows Brody to choke the life out of poor, gullible Sting. Next, we're joined by Miro, to a big babyface ovation, and the House of Black stare him down.

Tony Shiavone tries to get a word with Cole Karter, but they're interrupted by his opponent, FTW Champion Ricky Starks, with Powerhouse Hobbs. They put a foam shark fin on Tony's head and make the usual arrogant declarations about how Karter sucks, etc.

Cassidy naps at commentary while Regal compliments his behavior as effective mindgames. Trent starts against Mox, and they trade chops. Yuta tags in to a pop and locks up with Chuck. Trent tags himself in to trade haymakers with Yuta. Atomic drop by Yuta, followed by an enziguri, but Trent answers with a backdrop suplex! Chuck restrains his own partner, and Yuta thanks him with a stiff elbow shot. Chuck loses his temper and smashes Yuta into the barricades. Moxley chases Best Friends off with chairs to send us to commercials. Back from break, Yuta plants Chuck with an Olympic Slam. Moxley gets a hot tag and runs wild through Trent. Trent's interference allows Chuck to kill Moxley with the Awful Waffle. Yuta takes a pair of piledrivers but still kicks out at 2! Fans chant “This is awesome!” Yuta gets up to hit a German suplex on Trent, but gets stuffed by Trent, requiring Moxley to break the cover. Taylor ambushes Mox with a lariat, and they all go down for some applause. Moxley puts Trent into a figure four at ringside, while Taylor hit Yuta with a buckle bomb. Yuta rolls Taylor into the Seat Belt pinning predicament to steal the win at 11:56! Tight match and they delivered some needed followup to Yuta abandoning Best Friends for the BCC, ***¼.
Winners: Wheeler Yuta and Jon Moxley

Video promo for Claudio Castagnoli vs. Jonathan Gresham at ROH Death Before Dishonor.

Chompy the Shark hangs out at commentary to promote Shark Week.

Tony Shiavone hosts the new AEW Tag Team Champions Swerve Strickland and Keith Lee in the ring. They've brought cake and champagne for their celebration. Smart Mark Sterling and Tony Nese interrupt to announce that they've almost completed their petition to have Swerve removed from the roster. They ask celebrity guest Kevin Gates to sign but are rejected. Sterling insults Gates' music and Nese gets knocked out. Gates throws the cake in Mark's face. This segment fell into wacky sports entertainment purgatory quickly.

Tony Shiavone hosts a confrontation between the Dark Order and the Butcher and the Blade. Jon Silver offers up a “Butch” shirt to his favorite wrestler, Butcher. Alex Reynolds has another butch shirt for Blade, so they both get their asses kicked. Hangman Page shows up for the late save.

Jungle Boy returns with a chair in hand. Luchasaurus steps aside so JB can chase Christian out of the building.

Backstage interview with the Gunn Club, who are avoiding The Acclaimed. They will consent to a rap battle on Rampage.

Starks arrogantly has his way with Karter early. Karter actually gets booed for returning fire and hitting a dropkick. Karter hits a flying crossbody and clotheslines Starks to ringside. Back from commercials, Karter is still getting booed for his pedestrian offense. Karter hits a TKO but then misses a 450 splash. Starks hits a spear and ends this at 6:10. I have no idea why this was on TV, *.
Winner and still FTW Champion: Ricky Starks

Starks is in a great mood after winning and asks for another challenger. He's joined by Danhausen (who gets a big pop) and Starks clarifies that he didn't really want a challenger right now. They'll meet next week.

Tony Shiavone talks to Athena, Willow Nightingale, and Kris Statlander backstage. The trio has big aspirations to win championships and crush some baddies.

Tony Shiavone hosts the ROH/AAA/IWGP Tag Team Champions FTR in the ring to talk about their rematch with the Briscoes at ROH Death Before Dishonor. They seem to be enjoying their big babyface run a lot more than they expected to. Dax Harwood talks about how a young girl from their hometown had to work hard to overcome a hole in her heart, and that's inspiring them to work hard to be champions. Plot twist, that girl was Dax's daughter, so he's going to fight like an 8 year old girl and beat the Briscoes. FTR are simply flourishing right now.

Backstage interview with Jay Lethal, Sonjay Dutt, and the tall guy whose name I still haven't managed to learn. Dutt is wearing the foam shark head and is far too excited about Lethal's pending ROH TV title win. Christopher Daniels interrupts on behalf of Samoa Joe and challenges Lethal to some kind of confrontation on Rampage.

Hogan and Athena mix it up. Athena surprises with a haymaker to the head. Willow enters for a casual shoulder block and happily flexes her muscles. Hogan trips her up but misses a dropkick, allowing Willow to hit a low crossblock for 2. Willow slams Athena onto Hogan for another 2. Jade assists with a knee to Athena's spine, but gets knocked off the apron. Willow takes out Jade and Hogan with a cannonball from the apron, Athena follows with a dive onto everyone. Back from commercials, Hogan is getting worked over by the babyfaces. Jade stops a pinfall and meets Athena for a slugfest. They swat away each other's dropkicks and Jade nails a pump kick. Athena flies into Jade's arms for a fallaway slam! Athena kips up and hits a surprising meteora! Athena takes a moment to powerbomb Hogan onto the apron, but Hathaway's interference lets Jade drive her into the steps. Jade returns to the ring and finishes Willow with Jaded at 8:28! Solid match that continues to present Jade as bigger than the division, **½.
Winners: Jade Cargill and Kiera Hogan

Tony Shiavone talks to AEW Women's Champion Thunder Rosa and Toni Storm backstage about Fight for the Fallen. They will raise money to help ocean life, and Rosa defends her gold. They're interrupted by Britt Baker and friends to set up something vague for Rampage.

The Jericho Appreciation Society are locked in a shark cage hanging from the rafters, in case you forgot that Shark Week is coming. Ruby Soho is the keeper of the key and also has the lift switch. Besides that, there's barbed wire props all over the place. Eddie marches in with a wired microphone and goes for Jericho's forehead. Jericho begins bleeding heavily and clocks Kingston with a wired ring bell. They tease a table bump, instead Eddie throws Jericho into the ropes. Jericho counters with a super rana to send Eddie tumbling onto a flat wired table. Back from commercials, Ruby looks on in horror as Eddie slices Jericho up in the wires. Eddie suplexes Jericho off the apron and through a wired table! Tay Conti runs in to attack Ruby, Anna Jay fakes a rescue, only to turn on poor Ruby! They lower the shark cage to unleash the JAS onto Eddie. Cue the run-in by the Blackpool Combat Club and Santana/Ortiz. Eddie hoists a chair, Jericho hits a Codebreaker, but the chair lands on his own face. Eddie blocks the Lionsault by throwing the chair. Back fist by Kingston gets a close 2 count. Eddie applies a wire assisted stretch plum, but Sammy Guevara makes the save. Jericho's wired Judas Effect ends it at 13:14. This was humming along fine until the shark cage shenanigans, and then it fell off a cliff. Usually, AEW reminds me of 1996 Nitro, this reminded me of 2000 Nitro, *.
Winner: Chris Jericho

Eddie gets the final laugh by throwing Jericho into a wired spider web, as if this segment wasn't overbooked enough.

Final Thoughts: A good show with a really troubling main event. The sky isn't falling or anything, but I don't want to see bad habits develop because they're shielded by their existing goodwill.