From an empty Daily's Place in Jacksonville, Florida. This is AEW's first live broadcast in over a month due to the ongoing COVID-19 crisis. Fortunately for them, Linda McMahon's pro-Trump group (more or less) bribed the governor of Florida to declare wrestling to be "essential" so they're back in business (don't quote me on any of this). Our hosts are Jim Ross, Tony Shiavone, and Excalibur.

Janela forces Cody to work to keep up with his sense of urgency early. Janela throws a chop, Cody blocks another chop and targets the head. Janela comes back with a heel kick and rakes the back. Janela enjoys himself as he delivers hard Irish whips, Cody slips out of a counter and takes a rough landing on the bottom rope. Cody escapes a body scissors but Janela clocks him in the face. They brawl around to the stage and Janela charges out of the tunnel into Cody's fist. Disaster kick onto the stage, followed by a Cody moonsault off the stage! The wrestlers in the audience are either making a ton of noise, or they're piping in some sound. Janela cuts Cody off with a superkick and his flying axe handle gets 2. Cody responds with a reverse superplex for another good 2 count. Janela blocks Cross Rhodes, but Cody counters into a powerslam for 2. Janela counters a Disaster Kick into a German Suplex! Decapitation lariat by Janela but he moonsault misses. Cody Cutter gets 2. They slug it out and a Cross Rhodes out of nowhere finishes at 13:30! Gutsy win for Cody and a good showing for the criminally underutilized Janela, ***¼.
Winner: Cody

Video package reminding us that AEW Women's Champion Nyla Rose is a force to be reckoned with. She arrives in Daily's Place to slaughter someone but has to talk to Shiavone first. Rose belittles poor Tony and declares herself the most dominant woman on the roster.

Rose easily tosses her 18 year old competitor across the ring and stands on her throat. Paige ducks some attacks but her sunset flip is blocked. Paige hits an ineffective shot to the face and Rose punishes with a German suplex. Rose hits a Swanton Bomb but lifts Paige out of the cover to hit a trifecta of powerbombs to win at 2:20. Productive squash for the champ.
Winner: Nyla Rose

MJF joins us from a CGI city apartment, sipping wine. He has proven himself to be the guy in AEW, but no one will admit it due to hatred. He calls his critics insecure and says he's the first of his kind and can afford to miss some television, because his throne will be right where he left it. MJF gets carried away and stubs his toe, but otherwise he's injury free, and will return to action next week.

Shawn Spears stirs up some dirt, blaming Cody for what Lance Archer did to Dustin Rhodes last week. They cut to Shiavone talking to MJF and Spears in the amphitheatre. MJF calls Spears brave for telling the truth about how selfish Cody is. Shiavone announces that MJF will face Jungle Boy at Double or Nothing, and MJF spits his drink out in anger.

Moxley is only on day 67 as champion but it feels like he won the gold 6 months ago. J.R. is putting over Kazarian's 20 years of experience as he holds his own in a grappling contest. The match devolves into a brawl as tempers begin to flare. Just as I type that, they resume trading holds. Moxley escapes a headlock with a backbreaker. Kazarian absorbs a second backbreaker and defiantly pops up for headlock takedowns and a spin kick. Moxley drops Kazarian onto the stage, tweaking his knee to send us to break. They return with Moxley controlling the action, sending Kazarian through the ropes with a running knee. Moxley flies off the top rope into Kazarian's superkick. Springboard dropkick by Kazarian and a slingshot DDT for 2. Moxley responds with a German suplex, but Kazarian shakes it off for a backstabber and inverted DDT, but Moxley kicks out! They exchange shotgun dropkicks and Kazarian counters into a neat arm and legs submission that no one on commentary can name (not even Excalibur). Moxley escapes, but Kazarian counters with a guillotine leg drop. German suplex by Kazarian is basically no sold by Moxley as he slugs back with punches. Big lariat by Moxley but Kazarian gets some rapid nearfalls, and suplexes the champ into the buckles. Moxley maneuvers into the Paradigm Shift to win at 16:27! They aimed high with this one, and it fell short of being truly great due to circumstances and some moves for the sake of moves, ***.
Winner: Jon Moxley

Moxley's celebration is cut short when he's jumped by the Dark Order. Scorpio Sky and Christopher Daniels run in for a save attempt, but fall to the greater numbers. Mr. Brodie Lee arrives with a chair and puts down Moxley. Looks like we now know who Moxley's next challenger is. Lee takes a mic and mocks the champ for not having a live audience to save him. Evil Uno has told him that Moxley is a reasonable man, but Lee wonders if he's just a scared, fatherless boy, who won't answer his challenge. Moxley wakes up and says "Dude, all you had to do was ask." Lee kicks him square in the jaw for good measure and the Dark Order pack swarms him.

Brandi Rhodes cuts a promo on behalf of her family towards Jake Roberts and Lance Archer. She isn't afraid of them and demands they keep her name out of their mouths.

Archer knocks out a guy at ringside and blasts QT before the bell. Marshall is willing to return the fire, but Archer is simply meaner than him. QT attempts a slingshot plancha to the floor, but Archer counters with a chokeslam onto the apron. Archer gives Brandi a menacing look as they cut to commercial. Back from break, QT is desperately trying to come back and hits a glancing enziguri. Corner splash by QT and a vertical suplex. Archer answers with the POUNCE and casual Blackout. Archer has the match won, but chooses to finish with his patented claw at 7:51. Don't let the length fool you, this was a squash.
Winner: Lance Archer

Britt Baker randomly attacks Brandi from behind and rolls her into the ring. Roberts brings in his pet snake and drapes it over her, before briefly mounting her with a little pelvic thrust. Yikes. Call me a millennial snowflake, but this went just a tad bit too far.

A "Casino Ladder Match" is announced for Double or Nothing. The winner gets an AEW title shot. Taz tries to interview Darby Allin about losing Cody, and pokes him a bit for "pinning himself" and making lots of mistakes. Allin storms away without saying a word.

"Pineapple Pete" Sugar D takes a swing at Jericho for all the verbal abuse Jericho dished out while on commentary. Jericho has bigger fish to fry and backs off. Match properly kicks off with Matt biting Guevara's hand. Omega and Jericho brawl at ringside while Hardy punishes Guevara with a sitout powerbomb for 2. They trade dance partners and Omega victory rolls Guevara, but his moonsault is blocked. Jericho makes Hardy disappear in the tunnel and helps Guevara work over Kenny. Matt Hardy returns looking more like a Hardy Boy and runs wild, nearly pinning Sammy with a Side Effect and Twist of Fate on Jericho. Omega catches Sammy with a nasty snap Dragon, but Jericho blindsides him with a bat. Omega blocks a SSP, and Guevara takes a Twist of Fate and V-Trigger. They set Guevara on a table for Matt Hardy to splash him from a ladder. Hager removes the referee and drops Omega onto the apron. CUE THE COMMERCIAL! The fight continues on Picture in Picture, and they brawl out of the ampitheatre, and into the football stadium. Hardy tries to put Jericho into an ice machine, but Le Champion throws a block of ice into his face! Omega makes the save with a trash can. Sammy tosses Omega into an ATM, causing money to come out, haha. Omega powerbombs Guevara into a steel door and catches an interfering Hager with a V-Trigger into the furniture. Jericho suplexes Omega onto a barricade. They're all having way too much fun, Jericho wears a traffic cone as a hat before Kenny takes it away to smash him. Hardy emerges from the ice machine in a Broken state and steals a golf cart, and clips Jericho! Omega climbs on board and they chase down Guevara on the cart and MOW HIM OVER! Omega rides up a maintenance platform and moonsaults off onto the Inner Circle! Omega looks for a One Winged Angel, but Santana and Ortiz arrive on the scene! Hardy gets powerbombed through a table and Omega is powerbombed onto the roof of the golf cart! The Judas Effect finishes Omega at 19:25! This was incredible. Great action and ingenuity on display, ****.
Winners: Le Sex Gods 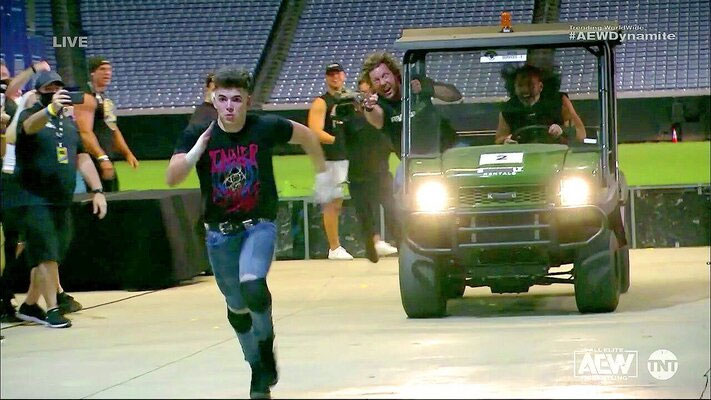 The Inner Circle pose on the football field as their logo appears on the jumbo tron. They flip off the viewers at home and stand tall.

Final Thoughts: The change of venue was a breath of fresh air and everyone seemed to be enjoying themselves. I wish they weren't still trying to do a Double or Nothing pay-per-view under the current circumstances, but Cody vs. Archer should be a strong enough anchor to build it around. I did not care for the Roberts assault on Brandi, I know it was meant to be despicable, but would have been better served to only go as far as having the snake come into play, without Roberts hovering over her in a mounting position. Otherwise, this show was a homerun and felt the most like a normal episode of live wrestling since the pandemic began.