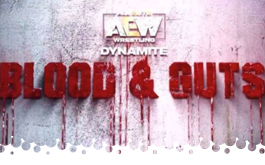 From Daily's Place. VIEWER DISCRETION IS ADVISED! Sometimes, I don't think we appreciate the fact that AEW delivers a TV-14 wrestling show that doesn't feel dirty. Jim Ross, Tony Shiavone, and Excalibur are calling the carnage.

Looks like we're getting a bait and switch, as Callis claims that Omega couldn't be here tonight and orders Nakazawa to wrestle by himself. If this move seems too stupid for AEW, fear not, as Kenny Omega sneaks in behind Moxley and Kingston for belt shots. Omega and Nakazawa double team Eddie while J.R. makes catty comments about if this is Texas Tornado match. You know something, Jim, after everything you sat through in the late 90's without complaining, you can give these guys a break if (checks notes) heels are breaking the rules. Moxley and Eddie eat Nakazawa for lunch, at least until Nak hits Eddie with a blatant low blow. Eddie eats a Kotaro Crusher and trades chops with Kenny. Finlay Roll by Omega, but Eddie dodges the moonsault and nails a falling clothesline. Moxley gets the hot tag and tears through Nakazawa. DDT on Omega, German suplex and piledriver on Nak for 2. Kenny can't get past Eddie so he takes a hike, leaving Nak to eat Moxley's lariat and pinned at 8:00. This was fine, Moxley and Kingston needed this dominant win, **¼.
Winners: Jon Moxley and Eddie Kingston


AEW Tag Team Champions The Young Bucks appear on the stage to distract Kingston and Moxley from an ambush by The Good Brothers. Kenny Omega and his new personal cameraman, Brandon Cutler, return to join the fun. One Winged Angel for Eddie and visual pinfall.

QT Marshall (with The Factory) vs. Cody Rhodes (with Arn Anderson)

Unlike their “exhibition match” weeks ago, this time Cody is eager to hurt QT and rushes in for a hot start. The ref takes away Cody's weight belt, inadvertently allowing QT to whip Cody's back with his own belt. They slug it out, and Cody gets dirty with eye and back rakes. Overhead superplex by QT and then a dead lift German. QT slaps Arn, who retaliates by grinding his head into the ring post. Referees break it up and eject Arn as they cut to picture-in-picture. They return with a collision from stereo crossbody attempts. They slug it out, QT nearly loses his trunks, and Cody nails a DDT. Standing moonsault by Cody gets 2. Disaster kick misses and QT reverses the Cody Cutter into Cross Rhodes for 2. QT signals the Diamond Cutter, Cody blocks, but QT reverses into a mighty buckle bomb. They trade Tombstone piledriver reversals until Cody finally hits one for 2 (he didn't hook the legs in the cover). Cody nails Cross Rhodes, but QT KICKS OUT! Wow. Cody helps QT up, QT flips the bird, and Cody mercilessly puts him into a Figure Four for the submission at 11:42. Cody is bleeding from the eye and looks like a bad-ass winner. I don't really want to admit how much I enjoyed most of this match, it over-delivered in action and drama, but it's a bit much to suddenly take QT as a guy who can kick out of tombstone piledrivers and Cross Rhodes, ***.
Winner: Cody Rhodes

Anthony Ogogo struts in and drops Cody with the liver punch. He drapes the Union Jack flag over Cody. Looks like Cody found his Double or Nothing opponent.

Alex Marvez talks to Ethan Page and Scorpio Sky backstage. Sky calls Sting a mosquito for sucking the blood out of AEW. Page says that he and Darby have a long history, but no one wants to hear about a bunch of matches that no one saw, so he brings up all of Darby's lingering injuries that he can take credit for. Darby Allin breaks it up with a sudden, vicious attack. He sprints up a ladder for a Coffin Drop onto Ethan. Sky slams metal steps over Darby, and then throws him down concrete steps! Darby clutches his elbow, he could be seriously hurt.

Dr. Britt Baker (with Rebel, not Reba) vs. Julia Hart

Julia is NOT from Calgary, just for the record. Britt is enjoying her #1 contender status for all it's worth and knocks poor Julia around. Sling Blade by Brett, and Rebel passes her glove. Air Raid Crash by Britt, but she pulls Julia out of the cover and applies Lock Jaw to win at 1:31. Fantastic squash match that checked every box it needed.
Winner: Dr. Britt Baker

It's time for Technique by Taz, and this time he's analyzing Christian Cage's frog splash and finishing move, The Killswitch.

These are the top four ranked teams in AEW and the winner gets a shot at the Young Bucks next week. Jungle Boy starts against Kazarian. SCU have to break up if they lose, and I can't imagine this would be their last match, so take that for what it's worth. The match quickly breaks down so they have an excuse to cut to picture-in-picture. They return with the Acclaimed in control of Daniels. STO to Bowens, and Luchasaurus tags himself in to tear through the Acclaimed. Luchasaurus chokeslams Garrison onto Pillman. Luchasaurus chokeslams Kazarian onto a crowd of bodies at ringside. Jurassic Express pile the Acclaimed with consecutive DVD's, but Daniels saves the match. Pillman catches Jungle Boy with a springboard clothesline for 2. Jungle Boy answers with a lariat, but Daniels trips him on the top rope. Daniels hits a flying flatliner on Luchasaurus, and Kazarian tags himself in to dominate Pillman. Kzarian ducks Jungle Boy's flying clothesline, but Pillman nearly steals the win with a roll-up. SCU finish Pillman with a BME/Piledriver at 9:15. Entertaining little trainwreck. I appreciate SCU using their team experience and crafty tricks to pull off the win, rather than just hitting a series of random spots before happening to win, ***.
Winners: SCU

Hype video for next week's IWGP United States Championship match between Jon Moxley and Yuji Nagata. It was starting to feel like the Forbidden Door had been closed again, but apparently it's still propped open.

Tony Shiavone hosts AEW World Champion Kenny Omega by the Blood & Guts cage to discuss the AEW title match for Double or Nothing. Omega is treating Nakazawa like a living trophy case, as he's draped in the Impact, TNA, and AAA titles. Kenny mocks the crowd for being excited for Blood & Guts and wants Shiavone to cut to the chase. Shiavone announces Orange Cassidy and Pac to be the top contenders, and they will face each other for the title shot at Double or Nothing. Orange Cassidy saunters out while Omega pretends to not know who he is. The fans chant “Freshly Squeezed” while Omega dismisses OC's credibility, while acknowledging that he's been a fan favorite in AEW.

Later, Tony Shiavone interviews Miro by the cage. I actually missed a segment last week in which Miro beat up his bestie, Kip Sabian, and made him whimper in pain. Tonight, Miro has a contract for a TNT Championship match against Darby Allin (who just so happened to get thrown down stairs). Miro refuses to accept a forfeit win and demands that Darby show up for a battle of the Man Who Doesn't Mind Dying vs. The Man Who Doesn't Mind Killing Him. There, Miro is a bad-ass murderer now, is everybody happy?

In case you didn't know, this is really a War Games match, the "Blood & Guts" name is a mockery of a dismissive statement that Vince McMahon made about AEW in 2019. Sammy Guevara starts against Dax Harwood, and hits a running dive from one ring into the other. The crowd is red hot and chants for Sammy. Harwood answers with a slick Anderson spinebuster, and he instinctively goes for a cover (crowd plays along with boos). Sammy shows great babyface fire with chops and then throws Dax into the buckles. They engage in a risky tightrope walk slugfest, and Dax takes nasty tumble against the wall. Sammy springboards from one top rope to another and hits a cutter. Shawn Spears enters the match a minute early and brings in a chair to abuse Sammy. Ortiz joins the match and evens the odds by tearing through Spears and Harwood with vicious chair attacks. Spears and Sammy go for stereo springboards but lock up for an insane Spanish Fly! LOUD “AEW” chant from the fans. Cash Wheeler joins the fight and helps Dax hit Ortiz with a tandem brainbuster. Wheeler smushes Ortiz' skull into the cage right in front of Santana. Spears throws Sammy into the cage wall and puts him into a Sharpshooter. Wheeler hits Ortiz with a Gory Special into the cage. Santana is the next man and runs wild as if he'd made a hot tag. With about 10 minutes gone, it's finally time for some commercials. They return with Wardlow taking his turn to dominate the Inner Circle. Jake Hager enters to the biggest pop of his career and runs wild through the Pinnacle. Hager Bomb on Wheeler, and the ankle lock makes Spears tap, but it's too early to count. Hager and Wardlow find each other for a hoss fight. The fans boo the loathsome MJF out of the building as he enters last. MJF distracts Hager from Wardlow's chop block to the knees. Chris Jericho is the last man in, and the bell officially rings. The Pinnacle and Inner Circle back off to draw fresh battle lines and charge into war between the rings. Jericho snuck Floyd into the ring and cleans house. Jericho follows Spears up the scaffold and chokes in the beam. They cut to another picture-in-picture break. They return with bodies everywhere, and FTR exposing the wooden floor within the ring. Sammy helps Santana and Ortiz hit spike piledrivers onto FTR! Codebreaker to Spears! Ortiz puts Spears into a Tree of Woe for Sammy's Coast to Coast Van Terminator! Meanwhile, Jericho has ripped a turnbuckle off the post and clocks MJF in the face. Santana and Ortiz gouge a bloody MJF with a fork. Jericho chokes Wardlow with a bat. Inner Circle seem poised for the win when Wardlow makes a one man comeback, only to fall to chair shots. Time for one more commercial break. During the break, Jericho followed MJF to the roof of the cage. MJF begs for mercy, but Jericho puts him into the Walls. MJF escapes with a low blow, and applies the Salt of the Earth! Jericho won't quit, so MJF slugs him with the Dynamite Diamond ring. MJF demands that the other Inner Circle members surrender, or else he'll throw Jericho off the top! The Inner Circle naively surrender at 33:51, only for MJF to throw Jericho off the roof and through a crash pad anyway. The first half of this absolutely rocked, and the second half petered out a bit, despite some well thought out character work. It rounds out to ****¼.
Winners: The Pinnacle

MJF admires his destruction of Jericho and utters an ironic "thank you."

Final Thoughts: Stellar edition of Dynamite. AEW utilizes its roster extremely well and it's so much fun to see guys like MJF, Darby, and OC continue to blossom into breakout stars. The Pinnacle winning Blood & Guts was the absolutely correct decision, and the door is left open for individual feuds from Blood & Guts to keep building. I think Double or Nothing is shaping up to be a grand event.