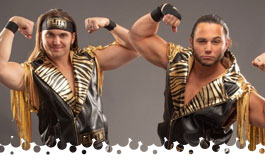 Cold open with a Young Bucks video promo, in which they explain that they chose friendship and family when they rejoined Kenny Omega at Jon Moxley's expense. I hope this heel turn sticks.

Mike Tyson talks to the camera and is delighted to be serving as an enforcer later, but he's quickly interrupted by MJF, who tries to remind him that Chris Jericho has been an enemy. MJF doesn't want Tyson to have any more regrets, like the tattoo on his face, and offers him a blank check. Tyson, being filthy rich and all, rips up the check and spits in MJF's face.

The camera pivots because the Bucks enter through the heel tunnel, dressed in new white, feathery jackets. Not sure if they are supposed to be angels, or ugly ducklings turned swans. Matt frantically trades holds with Pac. They reach a stalemate and Matt mockingly waves while sticking his forehead into Pac's face. Nick and Fenix tag in for an athletic sequence. Nick blasts Fenix with a stiff kick, but Fenix avoids a 2 on 1 attack and sets the Bucks up for a pair of dives. Death Triangle sandwich Matt for a series of humiliating kicks. Matt breaks Rey's springboard attempt by sweeping his legs, and the Bucks take control. J.R. grills Matt for making a “half-assed cover” and Pac storms in on a hot tag. Nick sweeps Pac to ringside to allow a dive by Matt. The Bucks hit stereo powerbombs onto the apron. Matt teases a high spot but then back hand springs into a back rake on Pac. Bucks are in control as they head to commercials. We're back, and Bucks prevent a hot tag by knocking Fenix off the apron. Matt pretends to make a hot tag and does an amusing parody of running wild on Pac. Matt's showboating catches up with him when Pac blindsides him with a twisting lariat. Fenix gets the hot tag and returns with a springboard crossbody. Fenix goes crazy with a rana off the ropes, right into a back handspring double DDT. Pac holsd Nick in a wheelbarrow position for Fenix' drive-by attacks, and then nails a Blue Thunder Bomb for an excellent nearfall. Snap Dragon by Pac, and a dead lift is blocked, so Fenix hits a tight rope penalty kick. Pac properly hits the German for another great nearfall. Match totally breaks down with superkicks, and Nick hits Fenix with a Destroyer! A slugfest leads to Fenix and Nick hitting stereo poison ranas at ringside. Nick superkicks Fenix, who no sells to roll into a cutter on the floor! Pac hits a superplex on Matt, and Fenix' frog splash only gets 2! Pac hits the Black Arrow, and Nick shoves Fenix into them to break the cover. Nick hits Pac with a blind low blow and Fenix dives into a superkick! Nick rips off Rey's mask, and the Bucks hit dual superkicks to retain at 23:23! Stellar match, as not only did this solidify the Bucks' (most recent) heel turn, but featured crazy athleticism and well-earned false finishes. I think I need a cigarette, and I don't even smoke, ****½.
Winners and still AEW Tag Team Champions: The Young Bucks

Alex Marvez interviews The Dark Order in their clubhouse. John Silver is on the road to recovery and can already lift his injured arm up high enough for a thumbs up while everyone cheers him on.

Alex Marvez interviews the Inner Circle and Mike Tyson. Chris Jericho explains that the beatdown they suffered from the “Pineapple” opened their eyes about some of the apologies they needed to make, including one to Tyson. Even though Tyson once knocked Jericho out “on a Monday night” he respects him. Even though Tyson is the special enforcer in his match later, Jericho doesn't expect any special favors. Tyson is happy to be friends with Jericho but vows to remain neutral.

Velvet assaults Jade before the bell, but gets blasted with a pump kick. Velvet escapes a pump handle slam and nails a roundhouse kick to the face. Velvet delivers a big time tope suicida! Jade fallaway slams Velvet into the wrestlers in the front row. Velvet stumbles back for a delayed vertical suplex back into the ring. Cue the commercials! We're back, with Jade missing a head of steam and driving into the buckles. Velvet makes a plucky underdog comeback, complete with a standing bulldog. Standing moonsault by Velvet gets 2. She misses a top rope moonsault, and Cargill hits Jaded to win at 7:35. Decent semi-squash, you wouldn't have guessed this was Jade's 4th or 5th match ever, **.
Winner: Jade Cargill

Tony Shiavone interviews Dr. Britt Baker, who complains about her place in the women's rankings. She's really doing this for the fans, because we deserve a role model as champion.

Anthony Ogogo (with The Factory) vs. Paul Carter

The feeling out process results in Ogogo making one, clean punch to the gut and wins by referee stoppage at 0:55. I can get behind One Punch Man as a wrestling gimmick.
Winner: Anthony Ogogo

Miro video promo, who is annoyed that his best buddy, Kip Sabian, has been ducking him ever since they lost the Arcade Anarchy match. Miro is sick of wasting his time and warns Sabian to stay out of his way.

Special Enforcer: Mike Tyson Each guy is only allowed one friend at ringside, and Tully Blanchard plays stupid when ordered to leave. Hot start for Jericho, who cleans the ring and grabs a chair. Tyson disarms Jericho, inadvertently giving Harwood an opening. Tyson disarms Dax as well, and Jericho leads the brawl into the crowd. Back to the ring, Dax gains the upper hand, and looks like he has a top tier singles run in him. Jericho clears the ring again, and Dax stumbles over to a production table to sneak a mic shot. Jericho knocks Dax over and takes away a camera, prompting Dax to flip him off. Dax throws Jericho shoulder-first into the buckles and gets a stern warning from Tyson as they head to commercials. We're back with Jericho and Harwood lighting each other up with chops. Double axe handle by Jericho and a bulldog. Lionsault gets 2! Harwood's rebound sitout powerbomb also gets 2! Dax misses a diving headbutt and Jericho rolls him into the Liontamer! Cash breaks the hold, and Guevara tackles him before Tyson can get involved. Jericho misses the Judas Effect and Dax nails a brainbuster for 2! Jericho desperately hits a Codebreaker, and the Inner Circle and Pinnacle appear on the stage for some faction warfare. Tyson punches out Cash. Sammy distracts Dax, and Jericho's Judas Effect ends it at 13:20. Jericho and Dax left it all in the ring tonight, this might be the most physically grueling performance Jericho has had in AEW since losing the title, ***¾.
Winner: Chris Jericho

Jericho announces that Mike Tyson has joined the Inner Circle!

Alex Marvez interviews AEW World Champion Kenny Omega and his friends in the parking lot, but Don Callis chases him off. The Young Bucks are now buddy-buddy with the Good Brothers. Callis says their story is just beginning. Omega explains that they are all sick of doing what the fans want. Matt Jackson puts the entire tag team division on notice, they can line up for BTE Triggers. Callis teases another surprise to come, and they superkick the camera. This promo totally worked, I hope they stick with this direction.

Statlander boops referee Paul Turner before locking up with Nova. She's using "Where Is My Mind?"" as her music like OC, and it fits her. Statlander hits some arm drags and boops Nova. Nova's roundhouse kick is blocked and Statlander nails a power slam. Press slam by Statlander and handstand leg drop. Statlander strings together clubbing offense and finishes with the Supernova at 2:52: Perfect squash for Kris, she looked like a total @ss-kicker.
Winner: Kris Statlander

Dasha interviews Team Taz about their attempts to recruit Christian Cage. Ricky Starks doesn't think they should waste their time chasing Cage. Taz thinks that Starks should stay away and let the others do the work.

Tony Shiavone hosts Christian Cage in the ring. Cage is thrilled to be interviewed by Shiavone for the first time, as well as having an open contract so he can continue outworking everyone. As per usual, Team Taz interrupts, and Taz is royally offended that Christian hasn't responded to his recruitment invitation. Christian says he wanted to do this in private, but Team Taz is a dumpster fire, and he came to AEW to win championships, so it's a hard no. Taz calls hims a "sh!t-bag" and claims he never liked him or his stupid buddy that carried his @ss. Powerhouse Hobbs marches to the ring for an attack. Christian has him set up for a Killswitch, but Hook's distraction allows Hobbs to knock him down. Hobbs hits a pop-up body drop on the concrete floor. Now that Christian has sold big-time for an upstart talent in AEW, maybe everyone can shut up about his push for a week or 2.

No, I don't know why this is Falls Count Anywhere. No, I don't care why. Darby goes for a quick springboard coffin drop and Matt blasts him with a chair. Matt works Darby over while Ethan Page and Scorpio Sky watch from the balcony. Allin has fresh welts and cuts on his back, but fires back with body shots, but Hardy plants him for 2. Matt slams Darby's face into a chair and he slumps into the canvas. Darby avoids a Pillmanizing and returns some chair shots. Private Party and Butcher and Blade run in for blatant (and legal) interference. The Dark Order and STIIIIIIIIING make the save. Now is as good a time as any for some commercials. We're back with Hardy throwing Allin over the rails. The Dark Order and Sting are still brawling with the Hardy Family Office. Ethan Page and Scorpio Sky consider a run in but back off when Lance Archer runs in to give Isiah Kassidy a Blackout in front of Sting. Meanwhile, Allin takes Hardy down on the stage, and Sting tosses him a bat. Matt begs for mercy but then lunges into a low blow! Hardy wraps Darby's head in a chair for a sickening Twist of Fate! ALLIN KICKS OUT AT 2! Matt drags Allin past Tony Khan and BJ Whitmer at the Gorilla Position, and drapes the champion onto a table. Matt leaps off a conveniently placed ladder for a leg drop through the table! ALLIN KICKS OUT AGAIN! They return to the stage, and Darby blocks a powerbomb and grabs Sting's bat. Matt has nowhere to run and eats a slew of bat shots. Darby trashes the broadcast table and chokes Matt onto the table. Darby climbs a production tower for a big time Coffin Drop through the table! Allin pins Matt at 16:32. If you can forgive them for delivering this match with no build or backstory, this was an insane Attitude Era style brawl with lots of vicious stunts and ingenuity along the way, ****.
Winner and still TNT Champion: Darby Allin

Final Thoughts: You know, I generally enjoy Dynamite every week, even when the show goes through some mild slumps. Having said that, I enjoyed this episode way more than most recent episodes! If this is any indication of what Dynamite will look like without direct competition from NXT, sign me up for more.