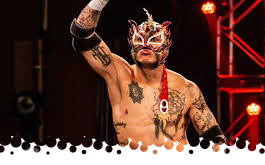 Taped from Daily's Place. Our hosts are Jim Ross, Tony Shiavone, and Excalibur. They announce that Paul Wight has signed with AEW and will be providing commentary for AEW Dark: Elevation on Youtube.

Nemeth can't hit a DDT and Moxley slaps the taste from his mouth. Nemeth absorbs several blows to the head and hits some knee lifts. Moxley responds with a back drop suplex. Nemeth hits a token dropkick, prompting Moxley to stop messing around and finish with the Paradigm Shift at 2:42. Squasheriffic.
Winner: Jon Moxley

Moxley takes a seat and makes his case for victory against Kenny Omega at Revolution. He addresses the Exploding Barbed Wire Death Match stipulation, conjuring up images of torture and mayhem. Moxley says he's addicted to the thrill of wrestling and baring his soul every time he steps into the ring, and throws the chair aside. Moxley promises to give everything he's got at Revolution and if it's the end, it'll be a hell of a way to go out. That sounds like code for "I'm not winning the title" but still a great promo. They cut to a music video highlighting the Omega/Moxley feud dating back to the first ever AEW show, and it's pretty awesome.

Backstage interview with Lance Archer and Rey Fenix, who will be facing each other for a spot in the "Face of the Revolution" ladder match. Fenix says Archer is the worst partner he ever had, and they start fighting. So, they have to wrestle to qualify for a ladder match that not everyone needs to win qualifying matches to enter, and the ladder match is for a shot at the TNT title, a championship that's long been established as a title that anyone can challenge for. I wish they'd put a little more thought into this and found a better excuse to have a PPV ladder match.

Earlier today, the Young Bucks and their parents arrive at Daily's Place. Papa Buck and his sons pose for a picture in front of the trailer.

The stakes are high in this match: 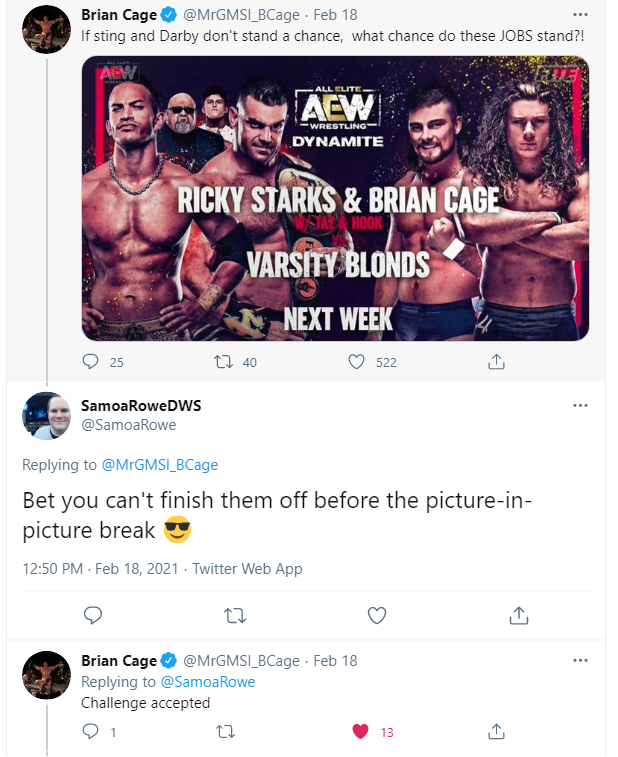 The Blondes get a strong start, trapping Starks with quick tags. Starks slips to ringside and takes Pillman's baseball slide dropkick. Starks blocks Pillman's springboard attempt, and Cage helps with a powerbomb into the ring post. They cut to picture-in-picture, so looks like I won the bet against Cage. Team Taz controls Pillman through the break. Garrison gets the inevitable hot tag and kicks Cage out of the ring and then hits a wild dive. Garrison slams Starks onto his face, but Cage breaks the pin. Pillman hits Cage with a flying shoulder, and helps Garrison with a missile dropkick/back suplex combo on Starks. Cage tags himself in and floors Garrison with a discus clothesline. The Drillclaw finishes at 9:11. Solid match in it's own right, but Team Taz needed to win a slaughter, **½.
Winners: Team Taz

Before Cage and Starks can celebrate, they're interrupted by a Darby Allin video. He emerges from his body bag in the desert, and emerges with no apparent harm. It starts to snow in Daily's Place, and Sting drags in a body bag, and opens to reveal Taz's son, Hook! Darby Allin flies in on a zip line and beats up Team Taz with his skateboard! Allin slingshots onto Starks while Sting puts the bat and boots to Cage. Stinger Splash on Cage and then a Scorpion Death Drop! This was all very cool and made me feel like a kid.

Tony Shiavone sits down with Kip Sabian, Penelope Ford, and Miro, and the friends are still upset that Chuck Taylor and Orange Cassidy ruined their wedding. Miro misses having "Charles" as a butler and invites him to come back and serve him some more. Tony passes on a note from Orange Cassidy asking for a match at Revolution, circle yes or no, hugs and kisses. Miro is offended by Cassidy's childish antics and vows to make him a man at Revolution. I'm not hearing a "no."

This is Cutler's first singles match on Dynamite since the premiere in October 2019. He's had some success on Dark in recent months, but Hager shakes him off with wheelbarrow suplexes. Hager Bomb leaves Cutler reeling, but he hits some desperation kicks and a tope suicida. Cutler hits a second dive, but then Hager counters with a spinebuster. Hager finishes with a running clothesline at 3:12. Fine squash, other than Hager hitting progressively less impressive moves.
Winner: Jake Hager

Santana, Ortiz, and Wardlow run in to put a hurting on Cutler, but The Young Bucks make the save and clear them out. The Bucks want to face Chris Jericho and MJF right here and now. Instead, Jericho and MJF appear on the big screen, and reveal that they'd bloodied Papa Buck! Jericho smashes Mr. Buck's face into the images of his sons on the trailer, which leaves behind bloody smears. Sick angle. The Bucks make a late save and can't get their hands on Jericho and MJF who peel off in a getaway car.

Papa Buck is later hauled off in an ambulance with Doc Gallows and Nick Jackson going along for the ride. Jim Ross is appalled by what has happened,

Video package meant to salvage the confusing and clunky Shaq/Jade/Cody/Brandi/Red Velvet feud. I'm still not sure what the main issue is supposed to be. The mixed tag is happening next week on Dynamite, hopefully Cody can move on to something better.

Page tries to boot Matt off the apron and doesn't let Kassidy blindside him. Page puts the boots to Kassidy and nails a fallaway slam. Kassidy hits some token shots, but Page plows through him with a clothesline. Kassidy flies into Hangman's boot and eats a slingshot plancha. Matt keeps chirping as Page dumps Kassidy over the rail. Kassidy blocks a powerbomb through a table, and Matt grabs Page's leg to block a Buckshot! John Silver and Alex Reynolds run in for support, and referee Aubrey Edwards ejects Matt! The damage might be done, as Kassidy has the upper hand while they go to picture-in-picture. Back from commercial, Page has an injured arm from Kassidy's beatdown, but still snaps his neck onto the ropes. Page sacrifices his bad arm to hit a roaring elbow strike. Kassidy hits a step up kick but then runs into Page's DVD! Page misses a sliding lariat but recovers with a Brainbuster! Kassidy comes back with a poison rana and then a cross armbreaker! Page monkey flips Kassidy onto the apron, but Kassidy blocks the springboard clothesline, snapping Page's arm onto the top rope! Kassidy springboards onto Page, who counters with a Deadeye for the win at 13:25! Top notch babyface performance by Page, who seems to be taking his game to another level, ***½.
Winner: Hangman Adam Page

Matt Hardy returns, angry that Page has chosen the Dark Order over him. Hardy throws Alan Angels off the stage and through a table.

Alex Marvez interrupts Kenny Omega during his welding class. Don Callis tries to keep Marvez back, but Omega stops to reveal that he's constructing barbed wire props for his Death Match against Moxley. This is all kinds of bad-ass and an improvement from having Omega hamming it up with school kids.

Britt tries to match Nyla's power with speed and craftiness. Rose shakes off a headlock and hits some scoop slams. Britt considers leaving and throws a fit at ringside, tossing some trashcans, etc. Britt returns and runs into Rose's Samoan Drop. Rebel pulls Britt out of harm's way, but Rose hits a press slam anyway. Britt yanks Nyla's shoulder into the ring post, and then kicks it against the rails. Cue the commercial! Back from break, Britt suplexes Rose into the ropes. Rose rallies with striking offense. Rebel provides a distraction, so Rose slams her onto the apron. Rose hits Britt with a neckbreaker for 2. Britt hits a bicycle kick and gets the glove from Rebel, but Rose hits a chokeslam. Rose has to fend Rebel off again, this time hitting a cannonball senton into the corner. Britt bonks Rose into an exposed buckle and sweeps her into Lockjaw! Rose powers to her feet and slams Britt for a good nearfall. Baker hits a pair of thrust kicks and a crucifix bomb, and then Lockjaw! Rose fights out and hits the Beast Bomb for only 2! Rose hits a second Beast Bomb to win at 12:39! Highly entertaining back and forth match, Rose did well in the de-facto babyface role against Baker's conniving heel, ***½.
Winner: Nyla Rose

Video package highlighting the issues between FTR and Jurassic Express. FTR are feeling pressure to live up to the expectations set for them when they arrived in AEW. Jurassic Express want payback for what FTR did to Luchasaurus' mask. Tully Blanchard is returning to the ring for a six man tag next week.

Winner gets to be in a multi-man ladder match at Revolution for a shot at the TNT title. Fenix puts his forehead into Archer's chest and gets swatted away. Fenix mistimes a roundhouse kick, but follows with a flying hurricanrana. Archer blocks a back handspring attempt and smashes Fenix into the buckles. Fenix recovers with a slick suicida and lands on his feet beyond the rails. Jake tripes Rey on the top rope and sends him crashing onto the stage. Fenix leaps over Jake for a senton onto Archer! They continue brawling as they cut to picture-in-picture. Back from break, Archer is towering over Fenix in the ring. Fenix blocks a chokeslam, but Archer spins him with a lariat on the apron. Archer delivers a hard Irish whip into the barricade, followed by a somersault senton into the steel. Back to the ring, Archer hits a wild overhead release suplex. Fenix avoids Blackout and hits a flying double stomp to the the back of the head! German suplex by Archer, followed by a tightrope moonsault! Fenix makes a scrappy comeback attempt, but Archer sandwiches him into the corner. Archer runs into a high kick by Fenix, and then an enziguri. Archer misses a running boot, and Fenix hits a tightrope penalty kick! Fenix flips into a cutter for only 2. Archer answers with a Fisherman Buster but Fenix kicks out! SPANISH FLY BY FENIX, but ARCHER KICKS OUT! Fenix hits a series of stiff strikes, but Archer blindsides with a POUNCE! Buckle Bomb by Archer and chokeslam for another great nearfall! Blackout ends it at 17:36! Totally surprising match that came out of nowhere! Fenix gets over as a gutsy underdog, and Archer looks like the agile monster we all expected him to be, ****.
Winner: Lance Archer

Archer hoists Fenix up by the mask and insists on a fist bump.

Final Thoughts: Tremendous episode of Dynamite that sets up a big episode for next week, gave a bunch of PPV matches the heat they needed, and made a lot of very good decisions along the way. This could have easily been a typical maintenance episode, and I would have defended it, but instead they pulled out some big stunts and surprises.