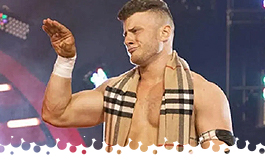 Live from the Wintrust Arena in Chicago, Illinois. Our hosts are Jim Ross, Tony Shiavone, and Excalibur.

Jon Moxley vs. Wheeler Yuta (with Orange Cassidy and Danhausen)

Moxley swats away a shotgun dropkick, Yuta dodges the King Kong lariat. Yuta reverses an armdrag and maneuvers into a dropkick. Moxley pouts at ringside, and blocks Yuta's dive with a headlock. Shotgun dropkick by Yuta, but Moxley swats away his missile dropkick back inside. Moxley flexes his muscles and takes controls with bruising offense. Piledriver by Moxley gets 2, so he applies an STF. Yuta hits an ineffective chop and Moxley pokes his eyes and rakes the back. Yuta blocks a superplex and floats into a dropkick and enziguri. Moxley hits a DDT onto the apron and pauses to trash talk OC. Danhausen's distraction lets Yuta hit a flying crossbody. German suplex by Yuta gets 2. Moxley answers with a TKO, but Yuta reverses the lariat into a Samoan Drop. Frog splash by Yuta also gets 2. Moxley's sleeper sets up a lariat, and he finishes with the Paradigm Shift at 7:30. Good match built around Moxley leaning into a subtle heel role, and Yuta teasing an upset, ***.
Winner: Jon Moxley

Bryan Danielson appears in the ring behind Moxley. Bryan asks the fans if they want to see them fight, and they respond with YES chants. Bryan says he wanted to fight Moxley for a long time, he's always wanted to test him, and puts Mox over as the best AEW World Champion. Actually, if Moxley had "a little support" he'd probably still be champion. This made Bryan realize that they shouldn't be fighting, but should be fighting together. Bryan says everyone loves AEW, but there's no reason why a millennial cowboy should be world champion, a guy dressed as a dinosaur should be tag team champion, and a guy best known for a vlog should be TNT champion. Bryan is making the argument that together, he and Moxley would run this place. What if they mentored guys like Wheeler Yuta and Daniel Garcia, instead of letting them be mentored by jokes. How about Lee Moriarty? What if they trained the future together? Bryan is getting a mixed reaction for all of this. Bryan doesn't want an answer now, he just wants Moxley to think about it. Moxley looks torn. Great promo from Bryan, this feels like the first chapter of something big.

Brandi Rhodes comes to the ring and heels it up by pretending to forget they were in Chicago. She's immediately interrupted by Dan Lambert and Men of the Year, for another round of heel vs. heel soap opera drama. Lambert rips Brandi a new one, saying that he feels like a decent human being standing next to her. Brandi tells Ethan Page to back off "We only hired you to get to Josh Alexander" and earns a "Shut the F up" chant for listing Dan's MMA accomplishments. She thinks Dan should spend less time with AEW and more time with "America's Top T!ts." Dan spews more sexist insults and gets slapped for his troubles. The crowd is threatening to turn on this whole thing. He brings out Paige VanZant for an attack, which brings out Brandi's friends from the women's locker room. They do a half-hearted pull apart brawl and I sure hope this isn't setup for Revolution.

Matt Hardy and the AHFO hang out in the stairway again. Hardy and Andrade aren't happy that Private Party lost to Jurassic Express, so Isiah Kassidy better redeem himself in a TNT title match against Sammy Guevara. That's quite the novel punishment. Hardy orders Kassidy to not fail him again, or he'll have no choice but to team up with Jeff Hardy again (I made up that last part).

Pac starts the match wearing a blindfold, and still gets the better of Black. He dramatically removes the blindfold and Death Triangle hit stereo dives. Death Triangle follow with the tandem diving headbutt to the groin of Black. King enters the ring to hammer Pac from behind. Back from commercials, Pac fights out of Black's corner for the hot tag. The crowd roars as Penta runs wild with Sling Blades. Pac flips Penta into a DDT. Pac takes out King with a shotgun dropkick, while Penta hits Black with a backstabber for 2. Pac makes a blind tag, but Black is ready for him. Black's sliding knee strikes get some nearfalls. Pac answers with a release German suplex and Brainbuster but King breaks the pin. Penta and King slug it out until Penta hits a slingshot plancha. Penta follows with a step up somersault senton to outside! Death Triangle look for Fear Factor, but King breaks it up. Black sprays black mist into Penta's face, and Dante's Inferno ends it at 10:25. This got pretty compelling near the end, it felt like the crowd was trying to will this into something special, but it tops out at ***.
Winners: Kings of the Black Throne

Adam Cole talks to the Cutler Cam. He defiantly states he is still undefeated in AEW and he will slap anyone who says that Orange Cassidy beat him. He feels he is lacking his deserved respect, and promises to show us all a new side of his personality. First, he's going to hurt Evil Uno.

Lars Frederiksen from Rancid is in the front row to cheer Ruby on. Ruby throws her jacket at Rose for some easy body shots, but Rose easily knocks her down. Ruby hits a splash for a quick nearfall, but Roser answers with a Samoan drop. Suplex by Rose gets 2, so she bites Ruby's fingers while applying an armbar. Rose slows things down, and it feels like we get the commercial break heat sequence early. Ruby leaps into Nyla's DVD and NOW it's time for commercials. They return with Ruby already in the midst of her comeback. They battle on the apron until Ruby hoists Nyla up for a TKO! Vickie's distraction lets Nyla hit a spinebuster onto the concrete. Ruby reverses the Beast Bomb into No Future, but Vickie puts Nyla's foot on the rope. Ruby goes after Vickie, which proves costly, as Rose pulls her in for a draping neckbreaker. They tease top rope finishes, Ruby slips while going for a step up No Future, and the Beast Bomb finishes at 10:53. This was really good up until that finish, I hate intentionally botched spots, **¾.
Winner: Nyla Rose

The Gunn Club find Jungle Boy alone and beat him into the streets. They throw him into a snow pile, HE'S HARDCORE!

Tony Shiavone hosts AEW World Champion Hangman Adam Page in the ring. The fans give him a mixed reaction, because OF COURSE THEY DO. We're not allowed to ever unironically like a top babyface. Page has bigger problems than Lance Archer, and would rather fight him now instead of waiting another week. Dan Lambert and Jake Roberts come out to talk down to Hangman. Jake has heard (from VERY RELIABLE SOURCES) that Hangman has been acting different lately, and he thinks it's due to fear. Archer appears for the attack, but Hangman drives him into the steps. Hangman turns his attention to Lambert, and Archer puts him down with a chokeslam onto the steps! Archer isn't finished and puts Page through a table with Blackout. This was a pretty big hard sell for a "challenger of the month" type match.

Chris Jericho complains to the camera that Santana and Ortiz wouldn't tag him in. Jericho demands a full Inner Circle team meeting next week so they can explain themselves. Does Jake Hager still work here?

Loud Punk chant at the bell, MJF hides in the ropes in order to lure Punk into a cheap shot. Punk gets MJF caught in a pendulum position and swings him around with punches. MJF tries to leave through the stands, but Punk smashes a fan's drink over his head. Punk crotches MJF on a handrail and unceremoniously hauls him back to the ring. Punk hits a series of scoop slams as the fans cheer him on. Punk signals Hail to the King, MJF rolls away, and Punk collides into the ring post on a head of steam. MJF destroys Punk's freshly injured arm with a knee drop against a table. Back from commercials, Punk desperately hits a flying crossbody. MJF blocks an Irish whip, so Punk hits a neckbreaker. Running bulldog by Punk continues the narrative that Punk is working around his arm injury. MJF rolls away from the GTS, so Punk slams him onto the ring frame. MJF trips Punk on the top rope, but Punk answers with a Pepsi Twist. MJF hides behind the ref and sneakily chokes Punk with tape while appearing to work a normal headlock. Punk fades away and it appears MJF has won at 14:40! Referee Bryce Remsburg sees the tape on the canvas, puts 2 and 2 together, and restarts the match. Punk nearly steals it with a rollup and runs wild with clotheslines and punches. MJF kicks Punk through the ropes for a bad landing on his arm, and they cut to more commercials. They return with Punk violently reversing a Heatseeker. Punk lands a springboard clothesline! MJF wrenches the bad arm against the rope, but Punk answers with a springboard dropkick. Punk hits a tope suicida, but now seems to have an injured knee. MJF aims a double stomp at the bad arm and turns his attention to Punk's bad knee. Punk reverses with an STF, but he's too hurt to hold on. Punk's leg is too hurt for the GTS! Punk breaks an ankle lock with the buckles. Punk desperately hits a poison rana and lands on his own head! Punk collapses, and MJF hits a chop block despite a neck injury. MJF his a blind low blow and a rope assisted cover gets 2. Back from more commercials, Punk hobbles through another comeback. They trade bites on the ropes until Punk busts out a PEPSI PLUNGE! Punk is too hurt to make a quick cover, MJF rolls away. They trade reversals, Punk blasts a KO kick, and Hail to the King connects, but MJF KICKS OUT! Punk signals GTS, but MJF chooses to collapse outside. Wardlow arrives, steps over MJF, and gets into Punk's face. While doing so, he dropped the Dynamite Diamond for MJF to scoop up and nail a loaded punch! MJF WINS at 39:13! Total instant classic, built around a story of survival. That finish is somewhat shocking as well, ****½.
Winner: MJF

Final Thoughts: This was the Punk vs. MJF show through and through, but I'm really fascinated to see where the Moxley/Danielson storyline is heading. I'd be lying if I said I didn't want to see them form a stable full of the young prospects. I think the Brandi/Lambert stuff misfired this time, so hopefully that can wrap itself up sooner than later. Good show, recommended.