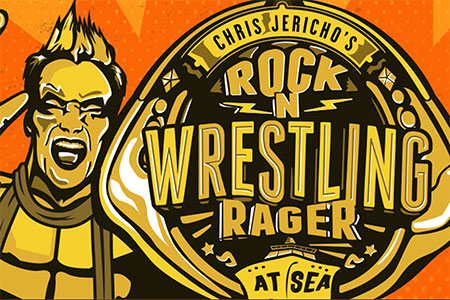 Taped from the Ship of Jericho in the Atlantic Ocean. The crowd is full of drunken hardcore wrestling fans who have been partying all week. Our hosts are Jim Ross, Tony Shiavone, and Excalibur.

Crowd is red hot and wants to chant a half dozen different things at once. Page and Kazarian exchange holds and forearms. Sky doesn't like Page's attitude and they shove it out. Omega tries to keep things light as he tags in and slaps hands with Sky before locking up. Omega's leg lariat gets 2. Page tags and knocks Kazarian off the apron before hitting Sky with a fallaway slam. Kazarian's bling tag allows a dropkick on Page to turn the momentum. Page suffers a horrific German suplex and Omega saves before the cover. Desperation lariat by Page. Sky dropkicks Omega off the apron to prevent a tag while Kazarian hits a backstabber and DDT on Page for 2. Omega and Sky make tags, but Omega has the Atlantic wind in his sails (boat pun intended). Omega's Fisherman Buster gets a close 2 count. The Elite hit rapid fire standing SSP's and moonsaults! Page wipes out Kazarian with a dive while Omega buckle bombs Sky. Omega's spinebuster gets 2! V-Trigger! Sky answers with a leaping super rana! Page accidentally clocks Omega with a lariat. Sky hits Omega with the TKO, but Page saves the match. Match continues on picture in picture through a commercial, with Kazarian hitting a cutter on the ramp. Kazarian's tornado DDT on Omega sets up Sky's nearfall. Omega avoids a double team and kills Sky with a V-Trigger. Page and Kazarian slug it out. Buckshot lariat gets 2 for Page. Back from break, Page hits a top rope fallaway slam. Omega throws Kazarian into Page's German suplex and hits Sky with a snap Dragon. Omega hits the piledriver on Kazarian for only 2! SCU rebound with SCU-later on Omega, but Page makes the dramatic save! Page hits a powerbomb on Kazarian and buckshot lariat on Sky. Buckshot lariat on Kazarian ends it at 19:07! This turned into a tremendous game of survival down the stretch. Probably Page's best showing in AEW to date, ****¼.
Winners and new AEW Tag Team Champions: Hangman Page and Kenny Omega

The Young Bucks arrive for an Elite celebration, but Page is looking for his own kind of party, as he drinks with the fans and body surfs out.

They lock up an Baker controls the wrist and scores a headlock takedown. Kelly shows signs of life with an arm drag as the match continues picture in picture. Kelly works a chinlock and kicks the back of the head. Kelly tests the referee by applying a chinlock in the ropes. Back from break, Baker shifts the momentum via hair pulling. Sling blade by Baker gets 2. Kelly answers with a (botched) bicycle kick and scores a roundhouse kick for 2. Superkick by Baker and Lock Jaw finishes at 6:02. No smooth sailing in this voyage, *½.
Winner: Dr. Britt Baker

Tony Shiavone interviews Baker in the ring. Baker makes fun of Tony for working at Starbucks. Everyone is so proud of Tony for being a part of AEW, because before he was a "sh!tty barista." Baker says she's under a lot of pressure because she's the hottest girl on the boat, aside from being smart, educated, brilliant, and a dentist too (in case you hadn't heard). Britt keeps rambling as they cut to break.

Le Captain Chris Jericho gets quite the ovation from the crew, complete with a sing-a-long of his "Judas" theme song. Jericho can't hide his amusement as the fans keep singing even after the song ends. Bell rings and Jericho slaps the taste out of Jungle Boy's mouth. Jungle Boy answers with a dropkick. Ortiz counters, but Jungle Boy cuts him off with a springboard arm drag. Stunt, wearing a life preserver, hits a crossbody splash off Luchasaurus' shoulders. Jungle Boy assists Stunt in hitting a DDT on Santana. Jurassic Express isolate Santana for some shine. Santana catches Jungle Boy with a Russian leg sweep off the second rope and the Inner Circle takes over to set up a commercial break. The return with the Inner Circle continuing to put Jungle Boy through the grinder. Jungle Boy counters Jericho with a high crossbody for a close 2. Santana and Ortiz swarm Jungle Boy to prevent any mutiny. Just when it looks like Jungle Boy is going to walk the plank, he hits a desperate reverse rana on Ortiz. Luchasaurus gets the hot tag and unleashes a tsunami on the Inner Circle. Double chokeslam by Luchasaurus and a standing moonsault on Jericho gets 2! Hager cheap shots Luchasaurus and they brawl onto the ramp. Stunt had tagged himself in and hits a 450 splash on Jericho for only 2! Jericho survives some quick roll-ups and blasts him with the Judas Effect for the win at 14:12! Highly entertaining showcase and good win for the Inner Circle as a unit, ***½.
Winners: The Inner Circle

Jericho enjoys a lil bit of the bubbly as the crowd sings him out.

MJF shoves Janela over at the bell. They lock up and MJF holds his own in a chain wrestling contest. Janela slaps away a handshake, so MJF spits in the face. Janela returns the favor and MJF takes a hike on the stage, luring Janela into an eye rake. MJF runs into a back body drop into the ring! MJF rolls away from a potential elbow drop and shields himself with referee Aubrey Edwards. This gives MJF an opening to viciously target the ribcage of Janela. Back from a commercial, Janela hits a superplex! Janela is then distracted by Kip Sabian and Penelope Ford making out on the stage. Janela misses an elbow drop, and MJF hits his spike DDT for the win at 8:02. If that's where things were headed, then why have a commercial break? Ending the match at 2:30 would have accomplished the same result. I'm concerned that distraction finishes are beginning to feel a tad bit routine in Janela feuds, **.
Winner: MJF

MJF summons a microphone. He mocks Cody for being a real lyricist in a world full of mumble rappers. Cody was right when he said that MJF was only a chapter in his book, however, he is the LAST chapter. He's then interrupted by Cody in the flesh. MJF panics a little before calming down and reminding Cody that he's not allowed to touch him, per their agreed stipulations for Revolution. MJF drops the mic on the canvas and kicks it away from Cody's reach. MJF flips Cody off as he backs up the ramp. Cody points out the fans are calling MJF an "@sshole" and while he can't touch MJF, the Young Bucks can! The Bucks drop MJF with SUPERKICKS and throw him into the pool! Fans chant "you can't swim" as MJF flails about. Five stars.

Tony Shiavone interviews new Tag Team Champions Hangman Page and Kenny Omega. Page is drinking, of course. Omega is proud to be champions with one of his best friends, while Page just wants to talk about kicking ass. Omega hasn't forgotten about Pac and promises to give him his rubber match, but his priority will be the tag titles. The Young Bucks arrive to congratulate them, but Page can't help himself but say it's funny he and Omega won the gold before they did. He leaves Omega behind to deal with those words.

Le Captain Chris Jericho joins commentary to scout his competition (and give the fans another chance to sing his theme song).

Moxley looks like a regular swashbuckler with his bandaged eye. The crowd is distracted at the opening bell by a passing boat, and they just have to chant cute things like "Our boat's better." You've got to wonder what the passengers on the other boat must think of all of this. Moxley and Pac keep a quick pace despite not having the crowd's full attention. Pac thumbs the damaged eye to gain an advantage. Moxley is in trouble as they head to commercial. The match continues in picture in picture, and Moxley gets into it during a brawl through the fans, throwing drinks into Pac's face. Back to the ring, Pac snaps the ropes into Moxley's eye and hits a missile dropkick. Moxley answers with an abrupt lariat. Moxley avoids a knee to the face and hits his twisting powerbomb for 2. Jawbreaker by Pac, and another right into the eye (Jericho calls it an "eyebreaker" right before I can type it). Moxley's flying elbow is blocked by Pac's knees. Moxley blocks the Brutalizer, but Pac kicks him in the eye. Moxley blocks Pac's 450 splash, but Pac headbutts the eye and hits a German suplex. Black Arrow misses! Moxley's DDT gets 2. Moxley's eye patch is bleeding through as Pac hits a superplex into the Brutalizer! Moxley teases a submission before getting a rope break. Pac rips off the eye patch and unloads closed fists onto the bad eye! Desperate inside cradle by Moxley, and then a Paradigm Shift! Second Paradigm Shift ends it at 17:17! Despite going a little long, this told an appealing story of Moxley surviving attacks on his eye and overcoming a devious competitor, ***½.
Winner: Jon Moxley

Final Thoughts: For now on, all wrestling shows must be held on boats. I think we can all agree.