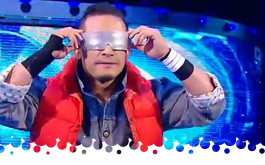 In memory of Jamin Pugh, famously known as "Jay Briscoe."

Live from Save Mart Center in Fresno, California. WrestleTix estimates attendance at 5,019 fans. Our hosts are Excalibur, Taz, and Tony Shiavone.

If Jeff Jarrett or Satnam Singh interfere on Lethal's behalf, Sonjay Dutt will be immediately fired. The crew kicks some fans out of their front row seats. Cassidy looks for an immediate Orange Punch, Lethal counters, and they aggressively feel each other out. Dutt talks Jarrett out of leaping the barricade, Danhausen checks their tickets. The Best Friends bring over some popcorn and beer to join the heels. Meanwhile, Lethal picks apart Cassidy's spine, though no one seems to be paying much attention. Cassidy amusingly rolls away to avoid Lethal's flying elbow. Cassidy blocks a flying hammer and makes his comeback with a diving crossbody. Stundog Millionaire by OC, followed by the tornado DDT for only 2. They trade counters until Lethal hits the Lethal Injection, but OC rolls away to avoid a cover. Meanwhile, Chuck Taylor dumps his popcorn on Sonjay. Jarrett tries to slip in the guitar, but Danhausen intercepts and taunts with some acoustic strumming. Cassidy capitalizes with the Orange Punch to win at 9:10. Despite the amusing sideshow, this was a pretty average TV match, **¼.
Winner and still AEW All-Atlantic Champion: Orange Cassidy

Satnam Singh forces his way into the ring. Sonjay pleads with him and Jarrett not to do anything, because his job is still on the line. Cassidy takes advantage of the situation and gives Sonjay some sloth kicks.

Video package hyping Darby Allin vs. KUSHIDA for later tonight. There's no story other than both guys are totally awesome and wouldn't it be cool if they wrestled?

The Bucks have momentum after winning the Best of Seven series against Death Triangle, but are looking pretty beaten up as well. Dante and Nick start trading wristlocks. They sprint until reaching a stalemate, Nick slips Dante's arm away and eats a roundhouse kick. Matt tags, but Top Flight hit a tandem bulldog. Snap suplex by Darius sets up Dante's slingshot senton. Nick interferes and they go supernova with a rapid sequence of attacks. Back from commercials, Dante flips over Matt for a tag, but Nick pulls Darius off the apron. The Bucks hit Dante with a bulldog/dropkick combo. The Bucks hit a splash/moonsault combo for 2. Darius gets the hot tag and plows through Matt. Darius' standing Spanish Fly and flying crossbody gets 2. Nick blind tags in for a superkick. Dante rolls through a sunset flip and they trade counters until Nick passes him to Matt for a Meltzer Driver, Darius interrupts. Dante moonsaults onto Nick, and returns for a combination springboard crossbody/powerbomb! Nick saves the match and runs wild, hitting a Canadian Destroyer for only 2! Fans chant "This is awesome!" The Bucks pay tribute to the Briscoes with their special Doomsday Device, Dante saves the match! Dante springboards into a SUPERKICK PARTAY at ringside! Darius ducks the BTE Trigger and pulls Matt into a cover to win at 12:15! It's temping to overrate this due to the fun, upset and sentimental feelings about Jay Briscoe… so I will. They left plenty of fuel in the tank for future matches too, ****¼.
Winners: Top Flight

The Gunn Club hijacks a promo segment intended for The Acclaimed. They declare themselves the best tag team in the world. They can't believe the Acclaimed embarrassed them after they helped them become popular (they even gave them their DAD!). AEW Tag Team Champions The Acclaimed arrive and the Gunns shout over Max Caster's attempted freestyle. They cut the Gunns' mic and Caster roasts them as the worst kids since Hunter Biden. They brawl in the ring and Daddy Ass Billy Gunn pulls them apart. Billy is sick of his spoiled sons, but also thinks the Acclaimed should start "acting like champs." They'll settle this the old fashioned way...in FAMILY THERAPY! That should make for some wacky television.

Renee Paquette chats with Hangman Adam Page. He feels physically fine and feels like he got his good word back for fulfilling his promise to knock Jon Moxley out. Dude, you're talking to his WIFE! Luckily, Renee is a professional, and listens politely. Hangman thinks the camera is off and asks Renee how Mox is actually doing.

Jake Hager (with The JAS) vs. Ricky Starks

Chris Jericho sits in on commentary. Hager charges into a full assault and taunts by doing the Starks pose with his purple hat on. Starks steals the hat and does a tightrope walk, but Hager blocks the sledgehammer. Hager throws Starks through the buckles, which seems to injure his leg when it gets caught around the post. Back from commercials, Starks slips out of a powerbomb and dropkicks Hager outside. Starks fights off 2point0 and nails a springboard crossbody on Hager. Starks blocks the Hager Bomb and nails a tornado DDT for 2. 2point0's interference backfires, and Starks pins Hager at 6:14. I know Hager is a bozo and all, but it feels like it's been forever since he had a bad match. This was a good short match, **½.
Winner: Ricky Starks

Danielson must win in order to secure his Iron Man match against MJF at Revolution. It's good to see Bandido again after he apparently fell off the face of the Earth. While he shouldn't win this match, I'm getting antsy to see Bandido win some matches. They lock up, Bandido points the finger gun, Bryan kicks it away. Bandido gets a robust chant. They restart with some chain wrestling. Bryan takes over with a Romero Special. Bryan taunts by firing the finger gun, Bandido shoots back. Bandido rolls through a sunset flip and traps Danielson's arms and lifts him up, Danielson counters with point blank headbutts! Bryan barely avoids a Texas Cloverleaf. Fans chant "This is awesome!" Bandido blocks a monkey flip and hits a stalling snapmare. Bandido applies a nasty standing knee bar, followed by a clean tope suicida. Bandido hits a soaring senton to send us to commercials. They return with Bandido hitting a high elevation throw. They light each other up with stiff shots until Bandido hits a springboard corkscrew senton. Loooong delayed vertical suplex by Bandido! Danielson blocks a frog splash and applies the LeBell Lock! Bryan pulls back the hand to stop a rope break, but Bandido twists his leg onto the ropes instead! Bandido counters into a modified GTS! Bryan blocks the slingshot German! They trade rapid counters until stumbling down for a breather. Fans chant "Fight Forever!" Danielson hits a backdrop to outside and then a flying knee from the apron. Bandido hits a moonsault power slam and then delivers the slingshot German but BRYAN KICKS OUT! They both look exhausted while trading slaps. Bryan reverses a Brainbuster into the LeBell Lock, but Bandido won't stay down. Bryan hits the BuSaiku knee out of nowhere to end a total thriller at 17:53. Bryan is free to continue on his quest, ****½.
Winner: Bryan Danielson

AEW World Champion MJF appears on the big screen to argue against the people who say he isn't deserving of the title. Bryan might THINK he wants to face him in an Iron Man match, but MJF is a masked monster who can slay a dragon.

Willow offers a friendly handshake before locking up. Storm grabs a headlock, Willow answers with a shoulder block. Back suplex by Willow, then a falling crossbody for 2. Willow cartwheels out of an Irish whip, which annoys Storm who answers with a face slap. Storm knocks Willow outside with a hip attack. The uninvited Hikaru Shida arrives just in time for a commercial break. They return with Willow breaking out of a Full Nelson. Spinebuster by Willow gets 2. Missile dropkick by Willow, but she misses a running cannonball and eats Storm's hip attack. Tornado DDT by Storm gets 2. Willow answers with a POUNCE! The straps come down and Willow nails the cannonball but Toni kicks out! Saraya distracts and Storm capitalizes with a roll-up to win at 7:14. Another good short match that got devoured by the picture-in-picture break, **¼.
Winner: Toni Storm

Storm and Saraya TURN HEEL by putting the boots to Willow. Ruby Soho runs in to chase them off. I missed whatever happened to Shida.

Renee Paquette is standing by with Konosuke Takeshita. He learned so much from wrestling his hero, Bryan Danielson. He delivers a long rant in Japanese, which he translates into a basic "MJF is an @sshole."

They start quick, Darby barely dodges some legsweep attempts. The fans give them a dueling chant. They trade hammerlocks until Darby hits a snapmare into a chinlock. Shoulder tackle by Darby leads to rapid counters until Darby forces a rope break. KUSHIDA grabs an ankle lock. Hip toss by KUSHIDA sets up a dropkick. Darby ducks a baseball slide and throws KUSHIDA into the barricade. KUSHIDA answers with a kick to Darby's bad arm. KUSHIDA blocks a Coffin Drop, Darby counters into Code Red for 2. Allin misses a diving moonsault and lands on the Young Lions. KUSHIDA drives Darby's bad arm onto the padding to send us to commercials. They return with the guys trading chops. KUSHIDA blasts a Pele kick, Darby counters with a Scorpion Death Drop! Darby tries a back hand spring, but KUSHIDA knocks him outside for a diving knee strike to the bad arm! Darby answers with the flipping stunner onto the apron! Darby sits KUSHIDA on a chair, but his diving shotgun dropkick is reversed into a cross armbreaker onto the floor! That bump was brutal! Allin crawls back, KUSHIDA drags him over the ropes for a DEVASTATING OVERHEAD ARMDRAG! The Young Lions encourage Sting to throw in a towel, but he just wipes his face and throws it into the crowd. Luckily, Darby hits the Last Supper out of nowhere to win at 13:39! That abrupt finish threw out everything they were building to, but still an incredible effort, although I'm increasingly worried about Allin's wellbeing, ***½.
Winner and still TNT Champion: Darby Allin

They shake hands, KUSHIDA signals that he'd like another shot someday. I feel like now would be a good time for Darby's next challenger to appear, but they end the show on a respectful note.

Final Thoughts: This Dynamite continues the recent trend of focused shows full of great matches and continuity for numerous episodic angles. Two MOTYC's doesn't hurt either. There was also a much needed course correction by turning Storm and Saraya heel, as they've been fighting an uphill battle to get cheered over more organically popular stars in the women's roster. There's a lot of interesting directions that this budding AEW Originals vs. Newcomers feud could head. Big thumbs up.