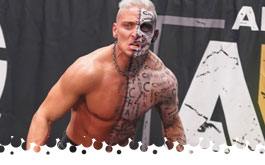 Live from Climate Pledge Arena in Seattle, Washington. WrestleTix estimates attendance at 8,822. Our hosts are Excalibur, Taz, and Tony Shiavone. They are debuting a new TV set and stage tonight, which more closely resembles typical WWE sets from over the years. Goodbye entrance tunnels and strange chandelier, hello big collection of LED screens.

Both guys get big babyface reactions, Jericho fixes that by flipping off the fans. Starks scores a quick shoulder tackle. Jericho interrupts Ricky’s posedown, so Starks viciously throws him into the steps. Jericho retakes control and draws big heat for shoving referee Aubrey Edwards. Ricky does his own strutting version of Undertaker’s tightrope walk shoulder smash. Matt Menard trips Ricky, but he still blocks Jericho’s sneak attack. Jericho hits a reverse suplex from the apron! Back from commercials, Starks hits a desperation clothesline. They exchange chops until Starks explodes into a flurry of quick attacks. Jericho blocks Roshambo, so Ricky instead nails a Liger Bomb for 2. Starks blocks the Lionsault, misses a moonsault (tweaking his own knee), but recovers for a nearfall. Jericho answers with a Codebreaker, Starks reverses the Judas Effect, Jericho reverses the reversal into the Walls! 2point0 break up the rope break, Ricky teases a KO before waking up to dramatically break free. Starks gets an inside cradle for 2, then a tornado DDT. Starks has to knock 2point0 off the apron, but still hits a spear to WIN at 12:38! I’ve got to hand it to them, I was rolling my eyes at both false screwjob finishes, and that made Starks’ victory all the more satisfying. Considering they are in front of a large Seattle crowd for the first time, this was absolutely the right call, ***¾.
Winner: Ricky Starks

The JAS immediately swarm Starks after the match. Action Andretti runs in armed with a chair. Andretti scores many chair shots before Tay Melo disarms him and Anna Jay sneaks up for a low blow. Jake Hager powerbombs Starks off the apron through a table! The crowd gives this entire sequence the right kind of heat. This is the most dangerous the JAS has looked since… well… ever?

Tony Shiavone hosts Hangman Adam Page in the ring for an update on his health. Hangman reveals that he’s still not cleared to compete. Hangman has one more chance to get cleared in time for the L.A. Dynamite, so he’s preparing to "knock Moxley’s d!ck into the dirt." That’s a new one. Jon Moxley marches to the ring and sarcastically rips Page for acting like a victim. Page clarifies that he’s actually angry that Moxley joked about his injury. Moxley gets upset and threatens to knock Page out for good.

Video package hyping up Samoa Joe vs. Darby Allin for the TNT title later. Joe is the "King of Television" and Darby is going to pay the price for insolence in his kingdom.

Caster royally offended Karen Jarrett last week by rapping that Jeff "stole" her from Kurt Angle. This week’s rap is more topical, and includes a Dixie Carter dig that makes Jarrett smile. Uh oh, Jeff thinks Max is funny, someone is sleeping on the couch tonight. The Seattle crowd loves The Acclaimed, so hopefully they don’t do anything stupid like take the belts off them tonight. Bowens viciously goes after Jarrett out of the gate. Quick tag to Lethal, Bowens hits a Kotaro Crusher. Caster tags and hits Lethal with an Olympic Slam! This is all very amusing. The Acclaimed give Lethal the Scissor-Me-Timbers leg drop to the groin. Jarrett tags and also suffers Scissor-Me-Timbers. The Acclaimed prematurely celebrate. Lethal lures Billy Gunn into getting himself ejected. Back from commercials, Bowens dodges Lethal’s Flying Elbow. Jarrett prevents a tag, so Bowens gives him a back suplex. This time Caster gets the hot tag and runs wild. Caster loses his temper and lunges at Jarrett. Lethal and Jarrett hit a weird tandem suplex for a scary nearfall. Lethal puts Bowens into the Figure Four while Singh and Dutt take out Caster. More officials are summoned to remove the giant. Bowens blocks Lethal Injection, but Jarrett hits the Stroke! Bowens got a rope break, but Dutt threw his boot off and JARRETT WINS! The internet is about to explode when the new referees restart the match. Bowens superkicks Jarrett and reverses Lethal’s pin predicament to win at 11:21! This was a novel take on the trope of having a second referee or official overturning a screwjob finish, because they provided a storyline reason for all the extra referees to have been out there in the first place. This was the second straight match of the evening to subvert my expectations and give a cathartic, feelgood conclusion, ***¾.
Winners and still AEW Tag Team Champions: The Acclaimed

Tony Shiavone sits down with AEW Women’s Champion Jamie Hayter and Dr. Britt Baker. They wonder who Saraya’s mystery partner will be. Britt doesn’t think Saraya understands AEW and what it means to the homegrown talent. Britt calls herself “The Boss” so get ready for the rumor mill to explode.

Jungle Boy Jack Perry talks to the camera about his issues with The Firm. He challenges Moriarty and Big Bill to face him and Hook in Los Angeles.

Bryan is the man of the hour and gets a megastar ovation from his home state friends. Woods grabs his boot, not allowing him to enjoy the YES chants. Nese capitalizes with a running boot for 2. Danielson comes back with stiff strikes and kicks. Running clothesline by Danielson, then some YES kicks. Nese blocks the last kick and hits a deadlift single arm powerbomb to the buckles. Nese misses another running knee and Danielson hits the BuSaiku knee! Bryan stomps Nese’ head into the canvas and finishes with the LeBell Lock at 3:28! Red hot squash.
Winner: Bryan Danielson

Bryan is in great spirits after winning in Seattle and wants to fight MJF right now! AEW World Champion MJF comes out to deny "Brain Damage Bryan’s" wishes. MJF calls Bryan a mark for wanting to wrestle all the time. Just because Bryan looks like a goat, he isn’t the GOAT, perhaps his mother had a non-human suitor. Bryan quips that he’s heard a lot about all the human suitors MJF’s mother has had, perhaps enough to fill this arena. He polls the crowd to see if anyone has had Max’s mother, and whadya know, several hundred of them have! MJF brags that top guys like Disco Inferno, Eric Bischoff, and Jim Cornette have put him over. Bryan says that even though he made a mom joke, he hates MJF, and actually does want to fight him. MJF insists that Bryan become #1 Contender first, so if he wins all his matches from now to February 8th, they can fight at Revolution. Bryan agrees on the condition that they’ll have a One Hour Iron Man Match at Revolution! That will give Bryan the opportunity to expose MJF for not being athletic enough to wrestle on TV every week.

Video package hyping up Orange Cassidy vs Kip Sabian at Battle of the Belts V.

The story here is that Swerve is trying to tie up loose ends from his past, so he’s taking on his old Lucha Underground rival. They start with a shameless spotfest that some curmudgeons won’t like and reach a stalemate on the floor. Pump kick by Fox, then a slingshot moonsault from the ring post! Fox launches through the ropes to hit a slick Brainbuster for 2. Swerve’s tattooed henchman interferes, allowing Swerve to hit a brutal kick from the apron. Back from commercials, Fox kips up to dodge a lariat and then nails an enziguri. Swerve counters into a cutter for 2. Fox finds his second wind and steps through an Iconoclasm to hit a cool cutter. 450 splash by Fox only gets 2! Fans chant “This is awesome!” Fox thinks about an outside suplex, but Mogul interference allows Swerve to hit a top rope DVD onto the ring frame! Swerve pauses to make a supervillain face before finishing with the Double Stomp at 9:13. Lots of brutal action here, terrific shine for Swerve, ***¼.
Winner: Swerve Strickland

Renee Paquette sits down with Saraya, Toni Storm, and Hikaru Shida. They accuse Britt Baker of acting like a gatekeeper. Renee wants to know who Saraya’s mystery partner is. Saraya says she’s picking the “best wrestler in the world” Toni Storm. Shida looks distressed. Well, Britt definitely teased Sasha Banks earlier, so I have to wonder if this is a red herring. Either that, or Britt made a huge mistake.

The Gunn Club come out to hold a mock funeral for FTR, who "died" on December 21st. Their disrespectful eulogy is interrupted by FTR’s music, but it’s a ruse. The Gunns declare themselves to be the new living legends, Top Guys Out!

Video package putting over next week’s Match Seven between Death Triangle and The Elite feel like an NBA Finals game.

Skye locks up with Velvet and rapidly trade pinning predicaments. Hogan tags and hits a hip attack and step up leg drop for 2. Velvet forces a tag to Jade to send us to commercials. They return with Jade gleefully hitting Hogan with a spinning slam for 2. Jade tags Velvet in with a condescending pat on the head. Velvet ignores this (for now) but gives up control to Hogan. Velvet gets suplexed into a tag, and Jade plants Hogan with a chokeslam. Jade orders Velvet back, but she walks away. Hogan nearly steals the pinfall but Jade bounces back to finish with Jaded at 6:49. Not bad, just a short match with one dramatic nearfall, *½.
Winners: Jade Cargill and Red Velvet

Jeff Jarrett rants and raves about the carney crap his team just experienced.

Special black and white Darby Allin video package, spliced together of footage from his first TNT title win and shots of him skateboarding around Seattle.

Darby gives a hug to Nick Wayne in the front row. Joe greets Wayne with a chokehold, so Darby flies in with a tope suicida. Darby hits a skateboard-assisted dropkick from the stage and quickly retrieves a ladder. Darby hits a somersault senton onto the ramp, and seems to destroy his own knee in the process. They hit the ring where Darby delivers a shotgun dropkick. Joe slips outside and is ready to counter with a devastating uranage onto the ring steps! Back from commercials, Joe is in full control. Darby dodges an elbow drop and lunges into a chokehold, but Joe slams him off his back. Darby gouges the eyes but runs into Joe’s front leg sweep. Joe hits an inventive knee-breaker, which Allin sells like death. Joe continues his relentless assault against the bad knee. Darby blocks the Musclebuster and uses all his momentum to hit a German suplex. Joe blocks the Stunner, Darby escapes a rear naked choke. Code Red by Darby, then a pair of Coffin Drops for the decisive win at 8:45! Does this loss mean that Joe is now only the King of Syndicated Television? ***¼.

The crowd gives Darby a big ovation for his victory. Sting comes out to join in the celebration, pulling Allin up for a big hug.

Final Thoughts: This was a grand episode that was overloaded with crowd-pleasing moments and finishes. I’m going out on a limb, but sometimes, that’s a good thing to do.