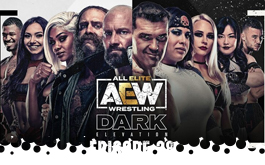 Sakura has transitioned into a heel persona since returning earlier in the Summer, mistreating her assistant. Aminata is currently 0-5 in AEW, and don't expect that to change tonight. Sakura slaps away a handshake offer. Lockup, Aminata grabs a waist-lock, but Sakura easily counters. More chain counters until Sakura bites the left hand. Sakura with a hair mare out of the corner followed by a surfboard. Aminata ducks a pair of chops and takes Sakura over with a snap mare. She grabs a head-scissors and uses his posterior as a weapon. They trade strikes until Aminata catches Sakura coming off the ropes with a back breaker. Running hip attack into the corner, followed by a running boot across the face. That looked snug. Sakura rolls away from a double-jump moonsault and slams Aminata face-first with a modified flatliner. She gets the "We Will Rock You" going and hits a body press in the corner. Butterfly into a back breaker and Sakura pulls Aminata up at two. Sakuta with a twisting Vader Bomb for three at 3:40. Sakura checks the watch for her time and doesn't seem so happy. Decent match with some snug strikes.

Kazarian has been labeled "The Elite Hunter" since the Young Bucks put an end to the team of SCU. Unfortunately, his only win against them in singles has been stooge Brandon Cutler, so right now, he feels more like Groundskeeper Willie trying to save the kids and constantly getting an axe to the back. He's facing ADAM COLE (BAY BAY) this week on Dynamite, so add another loss to his record. Lockup and Kazarian with a top wristlock. Whip to the ropes and Kazarian with a pair of shoulder blocks, followed by a fireman's carry into a roll-up for two. Schiavone and Eddie have a fun little exchange about the Cauliflower Alley Club. Jones forces Kazarian into the corner but whiffs on a cheap shot. Whip across the ring and Kazarian meets an elbow. He blocks the boot and nails Jones with a right hand. Jones with a TERRIBLE pop-up forearm out of the corner. Kazarian avoids a splash and nails a lariat. Kazarian with double knees to the back and the Chicken-Wing finishes at 2:58. Nothing Jones did impressed me. Just a win for Kazarian heading into Wednesday Night.

I'm sure this will tick off the hardcore pervs, but I'm glad Ford ditched her old gear for something a little more ring appropriate. Will we see the battle of the Bunny and Ford against TayJay soon? Probably. Lennox is making her AEW debut. Lockup and Ford goes to work on the arm. She yanks the hair and cries innocence. Lennox with a counter into a Russian leg sweep for barely a one-count. Lennox gets dumped out, allowing the Bunny to get some shots in as Eddie Kingston calls her names. Ford with a springboard into a double knee across the chest on the apron. Back inside, Ford with the handspring elbow, followed by a running boot. Release German out of the corner and Ford applies the Muta Lock for the tap out at 2:15. Ford is very athletic but stringing it together can be hit and miss sometimes. Here it was perfectly fine.

The Butcher & The Blade (w/ The Bunny) vs. Turbo Floyd & Truth Magnum:

First in-ring action we've seen for the Butcher in months, and he looks to be in the best shape of his AEW run. For those who've lost track, the Three Bs are part of the HFO. Butcher starts with Truth, clubbing him with right hands. Crisscross and Butcher with a low cross body press. Floyd tags in and Butcher no-sells a right hand. Floyd gets sent into the wrong corner and punished by the Blade. He nails Turbo with a Lariat, but Magnum saves. Butcher dumps Magnum and they finish Floyd with the combo powerbomb and neck breaker at 1:18. Short and simple. Butcher and Blade (when healthy) are a team I feel haven't been utilized anywhere near to the best of their possibilities.

Cargill is going the slow and steady push as the unbeatable force, quickly disposing of most of her opponents. To date, I think only Red Velvet was allowed to get any shine against her. Reed gets a little hometown pop. She charges and meets the boot of Cargill. Whip to the ropes and Cargill with a shoulder block. Reed keeps fighting but Cargill catches a body press, tosses her overhead, and nips up. Cargill with a pump kick to the chest and finishes with the butterfly face-buster ("Jaded?"") at 1:02. Cargill has a date with Leyla Hersh on Dynamite, so a nice appearance to warm people up for that one.

The return of TayJay! Anna missed most, if not all, of 2021 with a shoulder injury, having returned to the ring at All Out's Casino Battle Royal. Conti starts with Ella Shae, taking her down with a series of Judo throws. Conti with a spinning kick to the body, followed by a spinning side slam. Anna Jay tags in, as does Jaylee. Anna takes Jaylee off her feet and comes off the ropes with a rolling neck breaker. Whip to the corner and Conti with a rolling kick, followed by a running boot from Anna Jay. Shae trips Conti up from the floor, allowing Jaylee to take over. Conti fights out of the corner, nails Jaylee with an enzuigiri, and hot tags Anna Jay. She runs wild with back elbows. Whip to the corner and Anna with a spinning heel kick. Conti with a pump kick and TayJay with a double suplex. Double flatliner to Ella Shae. Conti with the Gory Special into a knee strike and the Queen Slayer from Anna Jay (rear naked choke) finishes Jaylee at 2:54. A little rough, but the double team stuff at the end looked good. At no point did the three men in the booth try to identify the enhancement ladies, so a knock against them not being prepared for the home audience.

Moriarty impressed in a losing effort against Joey Janela on the September 8th episode of Dark. Garcia, along with 2point0, have been a thorn in the sides of the likes of Darby Allin, Mox, and Eddie Kingston. Speaking of 2point0... wow, they went from barely used NXT/205 Live geeks to getting shine with some of the biggest names in AEW and have gotten over! Lockup and they trade holds on the canvas until Garcia goes to the ropes. Garcia with a side headlock and shoulder tackle, followed by a series of boots. Crisscross and Moriarty cradles Garcia for two. Garcia runs into a drop toe hold and Moriarty with a jumping cross body press for two. Garcia cuts him off with a forearm uppercut and lays him out with a knife-edge chop. Whip across the ring and Garcia (or as Eddie calls him, "The ugly kid") with another big chop. Moriarty fights back with forearms and hits the arm with a Pele kick. 2point0 on the apron, allowing Garcia to clip the knee. Basement dropkick to the leg for two. Kingston buries Bryce Remsburg, the referee that was assigned to his TNT Championship match at All Out. Moriarty fights off the Sharpshooter and traps the legs in a unique cradle for two. Garcia counters a suplex with a Russian leg sweep and hooks a cross-face. Moriarty pulls back on the fingers to escape and hooks a cross-face of his own. Garcia rolls through and goes for the leg, but Moriarty works his way to the ropes. Moriarty leaps over a charge in the corner and hits a jumping heel kick. Garcia avoids the double stomp, but a basement dropkick is countered with a second double stomp. Moriarty's knee buckles on a suplex. Garcia with a dragon screw leg whip and the modified Sharpshooter finishes at 6:14. Good match, and another solid effort from Moriarty in a losing effort. **½

Final match of the card. Blue was a local talent that got over with the live crowd in Chicago, leading to her getting a spot in the Casino Battle Royal. I don't know if she's signed or not, but I'm leaning no. She does get an entrance, so maybe I'm wrong. Rose is without direction, far away from the title picture and not part of any of the non-title related programs featuring the women's roster. Lockup into the corner and Skye Blue ducks under a right hand. Rose uses her size advantage early. She's staggered by a heel kick but plants Ms. Blue with a side slam and follows with a senton. Rose with a boot across the throat in the corner. Blue fights off the shoulders and throws a flurry of right forearms. Rose plants her feet on a whip attempt and plants her with a standing side slam. Blue counters the Beast Bomb with a sunset flip for a one-count. Rose misses a knee and elbow drop. Blue with dropkicks with little effect, but a running head-scissors does the job. Handspring forearm in the corner, followed by an enzuigiri from the apron. Blue with a flying body press for two. Rose catches a leapfrog attempt, and the Beast Bomb finishes at 3:33. Solid big vs little formula, but too short to rate. Final Thoughts: Nothing much to this episode for "feature" matches or any possible storyline development. Once again, Lee Moriarty had a strong showing in a losing effort, but he's still considered enhancement talent until the commentary confirms his signing. I liked most of the workers featured, so this was a quick 40-minutes, which brings on the usual recommendation for a show like this: If you like the names advertised, have fun with it, and if you don't, and if there's nothing as far as “star vs star” name power goes that tickles your fancy, go ahead and skip.