Yongary - Monster from the Deep 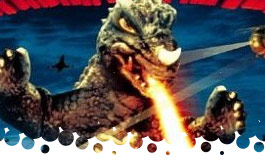 What better way to celebrate the Western Civilization tradition of "Halloween" than by jumping over to Korea for a movie knocked-off from Japan? Several ways come to mind, but go with me, here. Asian "giant monster movies" have long had a TV tradition around October, here in the states. From the 70's to 90's (and probably still today), it wasn't uncommon to have a channel run a marathon of "giant monster movies", in amongst the old Boris Karloff staples. Which is a little strange if you think about, because giant monster movies aren't necessarily "scary", the way a vampire, werewolf or horror movie strives to be. And it's not like many kids were running around dressed up like Godzilla, King Kong or Gamera. Or even my new pal, Yongary.

Coming out of Korea, circa 1967, "Yongary: Monster from the Deep" doesn't try to be anything beyond a Godzilla rip-off. All the elements are there: miniature props, guy in a lizard suit, astronauts, atomic radiation and the scrappy/under-appreciated scientist who saves the day. But borrowing from the later Godzilla flicks (and just about every frickin' Gamera flick), there's the spunky little 8 year old scamp who takes a liking to the big lug and dresses like a Fisher-Price figure.

All of this unfolds over less than 90 minutes and things play out like you'd expect. Our story starts at the rocket base of the "NCSR", which we can assume is this flick's verison of "NASA". An astronuat has just been married, on-base, and is heading out for his honeymoon. Just as he reaches the hotel and his bride wants to put a little Love Hurtin' on him, he gets a call from the NCSR calling him back. There's an atomic radiation test going on in "the middle east" ...and it makes perfect sense to send a capsule into orbit to observe it!

Here's something that might've been lost in translation. It took me a bit, but I gathered that "the middle east" is not what we Dumb Yanks think of as "The Middle East". It apparently refers to somewhere in the eastern portion of Korea. Which makes it all the more puzzling why there's a need to send a space capsule, thousands of miles above the Earth, to check on this. A helicopter would've been cheaper...so the film producers must've had a really cool space rocket miniature prop sitting around their lot!

This random atomic testing sets off a series of travelling earthquakes, heading right for Seoul. After some more film footage and worrying, the South Korean braintrust (including a guy who looks like a young Kim Jong Il), surmises that the earthquakes are actually the burrowing of the legendary Yongary! Pronounced both in the movie and in my head as "YONG-GAR-EE".

But wait, isn't he a "Monster from the Deep"? Then why does he pop up, smack-dab, in the middle of an inland mountain range in South Korea? Beats me. I'd have to say this was another "lost in translation" issue. We usually think of "the deep" as being well under the ocean, not the middle of a mountain range. Maybe the Korean word for "deep" is more attuned to "below the surface" and not necessarily "bottom of the ocean". But "Yongary: Monster from Beneath the Dirt" doesn't sound too well.

So of course, Yongary makes his way to Seoul, stomping on several miniature tanks and well-crafted model buildings along the way. He's basically a Godzilla clone, except for the fact he has TWO rows of spikes down his back and he has a big ol' horn on the end of his nose. He can shoot precision laser-beams from the end of his horn and can also spew fire. When he does spew, you can noticeably see the little pipe in the costume's mouth shooting fire. Yes, you can also see the guide-wires from the attacking planes and helicopters; nothing new there. Yet there's actually an improvement over Godzilla with how Yongary interacts with his environment. When a model buiding is smashed, it will actually blow-up, shooting smoke and fire. The models aren't simply prop-boxes, as interior pipes and ledges are seen as they're crushed. Yongary is also seen spitting fire and cooking the planes in a complete scene. The body of the Yongary costume looks more organic and natural than Godzilla, too. 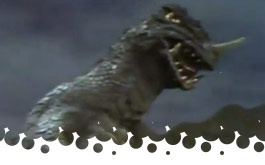 Around this point, the over-worked scientist (Ilo), his buddy the astronaut, and the annoying little kid named Icho come into play. Icho has wandered off and observes Yongary chugging down a couple refineries of oil as his main course. Yongary accidentally stomps on a tank of ammonia, which makes him all itchy and sleepy. Ilo then creates a special ammonia precipitate to combat Yongary. While Yongary is snoozing, Icho takes a liking to him, especially when Yongary wakes up and begins dancing to surf music! Icho digs it and yells" "Go, Yongary" as the big lizard cuts a reptilian rug before going on another rampage. Ilo, his astronaut buddy, and their women (who do nothing but whine and change their outits in every fricking scene) take a helicopter and dump a huge batch of ammonia on Yongary. Yongary get all itchy, then slowly waddles and collapses on a beach...and seemingly begins bleeding out of his rump as he dies. The usual monster movie "sympathy for the devil" moment is presented and I have to say I really feel sorry for Yongary. What an awful way to die-- by an itchy power that irritates the hell out of you then causes rectal bleeding. At least Godzilla usualy fell off a cliff, got hit by an avalanche or just decided it was quittin' time.

Sure, there are plotholes a plenty. Notably Icho who gets all dirty while watching Yongary. He returns to safety and a scene vividly shows his father wiping the dirt off of Icho's face. The next scene, Icho's face reverts to the exact same filthy mess it was before. The wives/love interests of the men always seem to be in a frazzled hurry, but take time to change into a new outfit before going anywhere. Oh, and what the heck happened to Yongary's body after his bloody ass death? We're never told... so cook up your own No-Prize and guess that South Korea has a "Monster Control" clean-up agency.

Several production flaws are evident, too. The camera pans too high in one fight scene and you can see the soundstage's wiring. The visible pipe in Yongary's mouth would have been forgiven if it had only been shown once and not every time he cooked up a blazin' spew. An early honeymoon scene features a character looking at a painted canvas, which is supposed to the night sky.

Why'd You Watch This?
Yongary's costume is decent and his stompin' rompin' antics are usually more fun than groan-inducing. The lack of overall originality really drags the film and makes you want to fast-forward or just turn it off completely. The surf music and rectal bleeding may get some adolescent chuckles, but it's even hard to do any "MST3K Riffing" while watching this. There's nothing you haven't seen before. It's basically South Korea saying: "hey, we can do giant monsters, too!" It's neither scary nor innovative, so unless you're a complete otaku "giant monster movie" fan, you may want to take a pass.