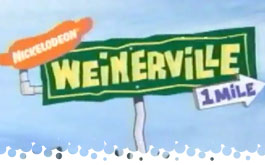 Weinerville. With a name like that, you have to question just what the hell you're getting yourself into. Originally developed and broadcasted on Nickelodeon during the Summer of 1993, Weinerville brought together the idea of a children's show that incorporated a live audience that was frequently used for on-stage performances, puppeteering, and a butt-load of what I assume were Public Domain cartoons to round out the half-hour timeslot. Practically the entire show revolved around one man: Marc Weiner. I'm not going to pretend I know much about the man, but you can assume from just watching five-minutes of one episode he has a strong interest in puppet-work. In this case, the majority of the Puppet characters (mostly, if not all, played by him) revolved around a puppet body with his head grafted onto them, usually wearing a silly cap or wig, and regardless of gender. I've honestly never seen Marc Weiner on television since, except for a very random appearance on another Nickelodeon series: Ned's Declassified School Survival Guide, playing a former Elementary teacher who has a tendency to use puppets.

Despite having a solid following and being nominated for several awards during it's short production run, Weinerville only ran first-run episodes for two full seasons. To be fair, at the time, Nickelodeon was known for it's "one-and-done" series, or in cases like Salute Your Shorts, somehow survived for two seasons. No, it's not the length of the first run episodes being so short, but that the series' run in syndication only lasted through the Summer of 1997 and was suddenly gone from network television. During a time when FOX Family (later bought by ABC) was airing re-runs of Pee-Wee's Playhouse, Camp Candy, and THE NEW Addams Family, it's amazing a warm-hearted show was never given any chances on one of the countless sister networks owned by Nickelodeon.

With this being the month of October and Halloween Havok, why not focus our attention on an episode that has some VERY minor relevance to the Halloween spirit? This episode is titled "Haunted", and was one of the earlier episodes from Season 1. Like the typical episode, we open inside the "office" of Mayor Dotty, a.k.a Marc Weiner wearing his mother's wig. I think he just replaced Nathan Lane as most comical looking man dressed as a woman. Apparently, her office and the town of Weinerville is being HAUNTED, so haunted that her assistant Zip gets flung out the window! Don't worry, he's the residing crash-test Puppet, so he'll be back as if nothing happened to him. Meanwhile, out on the streets, Marc is running around doing his worst attempt at covering up the fact he's carrying around a ghost on a stick, trying to scare poor Dotty. Just look at that face... actually, maybe not, it's quite creepy... both of them. 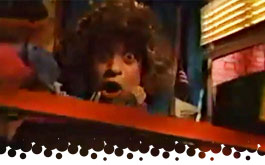 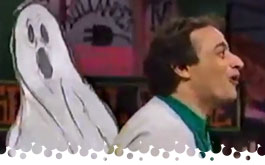 We throw it to an episode of Mister Magoo, who in this 6-minute adventure, is out on Safari. For you youngsters or people who didn't have the pleasure of watching these old cartoons, Mister Magoo is the ultimate in one-note jokes: Magoo is practically blind and constantly gets confused with what he's interacting with. For example, he's out hunting and lays his gun across the mane of a Lion, thinking it's a field of grass. The only other noteworthy tidbit about Magoo is that he is voiced by the same man who played the role of the Millionaire, Thurston Howard, on Gilligan's Island.

We return to the live set, where it's about time to open the General Store. Marc Weiner fails again at masking his attempts at being scary, carrying around a "floating" Candlestick before being outed by the camera-man. The General Store is basically his attempts at improv comedy using props, but I guess that means it's not improv, since he's clearly going to be familiar with whatever items he's going to present. This time around it's a long stretch of hair that he uses to make the obvious references: Don King's hair, ZZ Top's beards, Madonna's... under-arms? Really, you had to go there, Marc? Oh well, at least this was years before Osama Bin Laden and American's new-found relationship in hating people of Arabic descent. He then pulls a kid out of the audience, asks them about CIGARETTES of all things, and then shows off a baseball cap with a built in smoke detector (that malfunctions, of course) and a hat with a skunk's ass that sprays to cover the awful scent of Cigarette smoke, because Cigarettes are the fucking DEVIL! 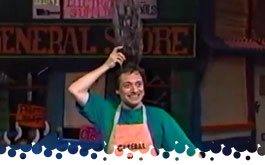 We're introduced next to Boney The Dinosaur, another one of Weiner's more-often used characters. He's basically a skeletal Dinosaur with a surly attitude. He throws a few one-liners at a couple of young girls and tries to convince them that ghosts are real. What a shame, we were a few years away from a situation where "Boney" would be a sex crazed pervert and the two girls would be played by Strippers, but this is wholesome, FAMILY entertainment. Turns out that the girls AREN'T stupid after all, and point out the stage-hand is hanging a ghost on a wire, and casually walk away. Boney the Dinosaur proceeds to fire the hapless fool and fades away singing his catchphrase, "I'm Boney, I'm Boney, Leave me aloney." 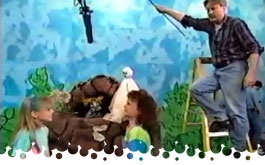 While we prepare for people to get Weiner-ized (minds out of the gutter, please...), we get an uncomfortable moment as a full-grown man and a young girl (who are picked from separate sections, so are seemingly unrelated) are chosen for the next skit. I guess the dude wasn't aware of how things worked, as he proceeds to follow the girl into her "shrinking" section. Someone tell Pedo-Dad to step away from the minors and get back into his own broom closet, this is a children's program, not the molestation hour. Maybe hanging around a guy named Weiner who spends his free time around a bunch of 10 year olds has given him the wrong impression. Screw Weinerville being Haunted, the real Terror was the near-possibility of a pedophile in action in front of an audience with a Puppetmaster who likes to dress up as a baby.

Now that the unpleasantness of the last 45-seconds is being pushed out of our minds, it's time for the second cartoon of the episode: Jacky's Whacky World Cartoon: The Story of George Washington. It's like a knock-off of the Fractured FairyTales in the Rocky and Bullwinkle Show, except with even worse animation, if you could imagine that. It's basically a kid reading historical "facts" that are paired up with comical images, like using the term Yankees and British Empire, and using a baseball joke to go with it (because Empire sounds like Umpire). I almost grabbed a screen-cap of that image, but chose not too. Maybe it'll appear randomly on my Facebook sometime soon. Back to the story... George Washington was born looking as he did as an adult, chopped down a Cherry Tree that caused his father to pout like a girl, and muster his troops by painting them (and one of their hot tags) with actual MUSTARD. The other notable joke of the short: That Abraham Lincoln was born in a log cabin that he built himself. Literally. 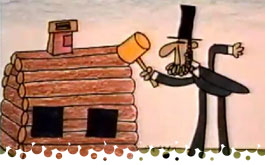 We return to Weinerville for the conclusion of the episode, which consists of a segment called PlayLand. Here, Marc Weiner dresses up as what appears to be a Carnival Barker and hosts a short competition between two audience members who have to interact by using puppet hands. Today's game: Ghosts-a-Slidin", where you have to push paper ghosts down a ramp and into a bucket, which happens to have cardboard on them with R.I.P. printed across the front. Now you know this is a spooky episode! R.I.P. is like getting an "R" Rating when it comes to children's television! Anyway, the adult wins (fix!) because it's best for business. The little girl gets a Silver Wiener for being the Runner Up in a field of two, and creepy man receives the Golden Hot Dog, as well as the special sauce: SLIME! Let me say that again, just incase the sexual undertones weren't obvious: THEY WERE GIVEN A SILVER WIENER AND GOLDEN HOT DOG, AND TOPPED IT OFF WITH SPECIAL SAUCE. I don't have to add anything else to that, the implications are all I needed to get a cheap chuckle. 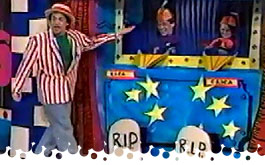 And so ends this episode of Weinerville. Considering I haven't watched any episodes since I was about 11 years old, I have to say... it's about as cheesy as I remember it being. There's absolutely no way I could imagine sitting through this stuff as an adult, but from a child's POV, it's harmless fun, although you can find little dirty jokes sprinkled around if you have a warped and twisted mind like I do. Marc Weiner seems to have legit passion for his work, so even when he's cracking a smile when he's trying to be oblivious, it's hard to get mad at him. While the Weinerville segments move at a nice, rapid pace and vary with it's different elements of comedy and audience participation, it's really the animated shorts that kind of drag things down.

Using animated shorts as bumpers for children's broadcasting is nothing new, and have traditionally been a weak subject in the overall quality and presentation, but in the case of Weinerville, the shorts are TOO long. With 23-minutes of broadcast time excluding commercial breaks, the cartoons tally up to roughly 12-minutes, more than half the show. Yes, the humor and style that Weinerville is based on requires short, rapid changes from sketch to sketch, and it's practically a one-man show, but it's still boring to sit through cartoons that are of sub-par quality. Mr. Magoo is funny for about a minute, but the other cartoons often used are bottom of the barrel quality. During Season 2, they would start using Alvin and the Chipmunks as bumpers, which dramatically improved the quality because, guess what, those cartoons were at least decent and had more than one character that beats the same one joke into the ground over and over again. Since no episodes of Weinerville have ever been released on commercial video, due to copyright and trademarks being owned by various people and companies, your best bet is to track some down on YouTube.

For more information, you can visit www.Weinerville.com to learn more about Marc Weiner and his land of Puppets. To give a fair warning, most of the information is copy and pasted from Wikipedia, but you can still buy Weinerville merchandise! No underwear available, unfortunately.